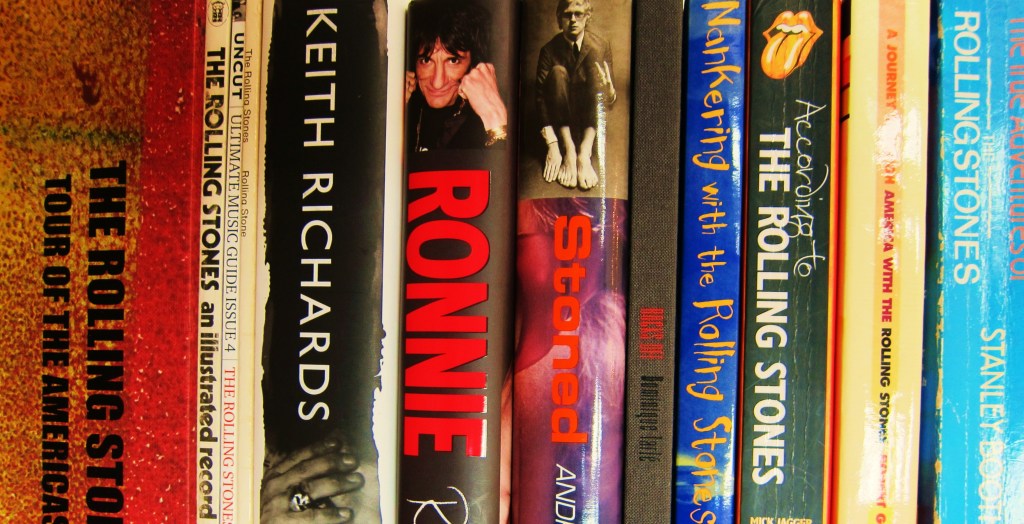 The best books about the Rolling Stones? Read on…

The Rolling Stones pretended they wouldn’t be touring in 2012 to celebrate their 50th anniversary, and Keith claimed that as Charlie didn’t join the band until 1963, he had a decent get-out clause to postpone the festivities until next year.

So whilst we waited patiently for The Stones to get their act together, there were plenty of books about them to pass the time?

There are probably more Rolling Stones books out there than Keith Richards has had hot dinners. Well – cold turkey, perhaps.

At about the time of the Italia ’90 World Cup, I saw The Stones at Wembley Stadium for the first time. A rag tag band of hard drinkers, drug takers, womanisers and gamblers had made the transition over relatively few years from tiny, uninterested crowds to filling football stadiums across Europe.

But that’s enough about the England football team. The Stones actually played one of their Wembley gigs the night England were beaten by Germany on penalties. Cheers or resigned sighs broke out sporadically as news spread from those who had brought their transistor radios with them.

As strange as it may sound, I was only familiar with half their songs in 1990. A damning indictment of the UK media’s ambivalence towards rock music is that the first time I heard Paint It, Black was when I was twenty years old.

Fortunately, I also saw them on the Bigger Bang tour more recently at Twickenham. It is fair to say that like a fine wine, they continue to get more expensive. Oh, sorry, I mean “better”. I have only appreciated them more as years go by…

Knowing which of the many books about The Stones are worth picking up and which have the searing literary insight of a year-old copy of OK! Magazine left in a dentist’s waiting room is tough even with Wikipedia, Google, an active Amazon account and a seventy-word-a-minute typing ability. So to save you the trouble (well – I’ve done all the work now – shame to let it go to waste) here is my definitive list of classic Stones literature. And when I say definitive, I mean not quite definitive. On my “Yet to Read” pile is Wyman’s biography (not great I hear), Philip Norman’s “The Stones” and  “Under Their Thumb” by Bill German (better, apparently) but I can’t include books I haven’t read, so if I have missed a good one, then do let me know…(I haven’t heard of a decent Jagger bio, for example).

So here’s the er, completely not definitive but maybe a little bit definitive Top Ten Rolling Stones Books of All Time:

Life by Keith Richards: There’s only one Stone who can tell the whole story of the band who isn’t the lead singer. Or the drummer. This became an instant classic upon release in 2010. Loved the story of Mick referring to Charlie Watts as “my drummer” only for mild mannered Charlie to punch his lights out and tell him “I’m not your drummer – you’re my singer!”

The True Adventures of The Rolling Stones by Stanley Booth: Finally back in print – see previous post for a more detailed look at this classic tale of excess.

STP: A Journey Around America with The Rolling Stones by Robert Greenfield: Picks up the tale left behind by Stanley Booth and runs with it. Hard. We join the Stones in 1972 on tour in America. The Playboy Mansion, Truman Capote, an infamous arrest (and lucky escape) and an inflatable onstage phallus reflect The Stones’ superstar status…

Nankering with The Stones by James Phelge: A first hand account of the Stones in 1963 as they share a grotty bedsit with the author. An authentic look at a struggling rock band in the sixties…whatever became of them…?

Stoned/2Stoned: Andrew Loog Oldham blagged a job as London publicist for The Beatles and subsequently went on to manage The Rolling Stones for the early part of their career. He inspired Jagger and Richards to write songs by grabbing Lennon and McCartney off the street and showing them how it was done. The Stones’ first Top-20 hit single “I Wanna Be Your Man” was the result and the rest is history. The books are gossipy and offer a superb and first hand account of London’s swinging sixties.

Exile by Dominique Tarlé (Genesis Publications): A gorgeous and impossibly expensive photo album of the band in tax exile at Nellcôte, the mansion in the South of France where Exile on Main St was recorded. Tarlé’s photos sum up the spirit of Rock and Roll for me – never has a band looked so definitively cool whilst looking so shabby and out of it – and to such great effect: Exile… became a bona fide classic…

The Rolling Stones on Tour / Tour of the Americas (Genesis Publications): More photos for this most visual of bands. The first book is a collaboration between Christopher Sykes and Annie Liebowitz of the 1975 Tour of The Americas, first published in 1978. The second is Sykes’ photos from this book expanded and published with a tour diary in a Genesis edition. I was fortunate to buy this second hand at a bargain price – its a lovely coffee table style book. (A live recording of one of these shows has just been released by The Rolling Stones Archive. Titled L.A. Friday ’75 the show is third in a series of live recordings The Stones are releasing, including the legendary ’73 Brussels Affair bootleg).

Ronnie By Ronnie Wood: Ronnie’s book is a likeable account of his life from gipsy boat dweller to rock star to recovering alcoholic. He concludes that his wife has been a Great Thing in his life. Unfortunately as you may have heard he fell off the wagon and she left him a couple of years after the book was published. Don’t try this at home folks….

An Illustrated Record by Roy Carr: One of a series of books (The Beatles, Bowie and Dylan also had books in this format) that looks at the band through the record sleeves, tour posters and other ephemera which is great to look at…

According to the Rolling Stones: The Rolling Stones’ answer to The Beatles’ Anthology project – an official history of the band as told through the voices of the main protagonists, including the band.

A final and quirky addition to this list is a book entitled Guv’nors of RnB. It is by no means a literary classic, merely containing photos and lyrics for all the albums up to Goats Head Soup. Published in Holland in the early seventies and featuring a psychedelic cover, I have been unable to find out much about it, but it looks nice on my bookshelf. If any Stones fans out there can shed any light on it, do get in touch…