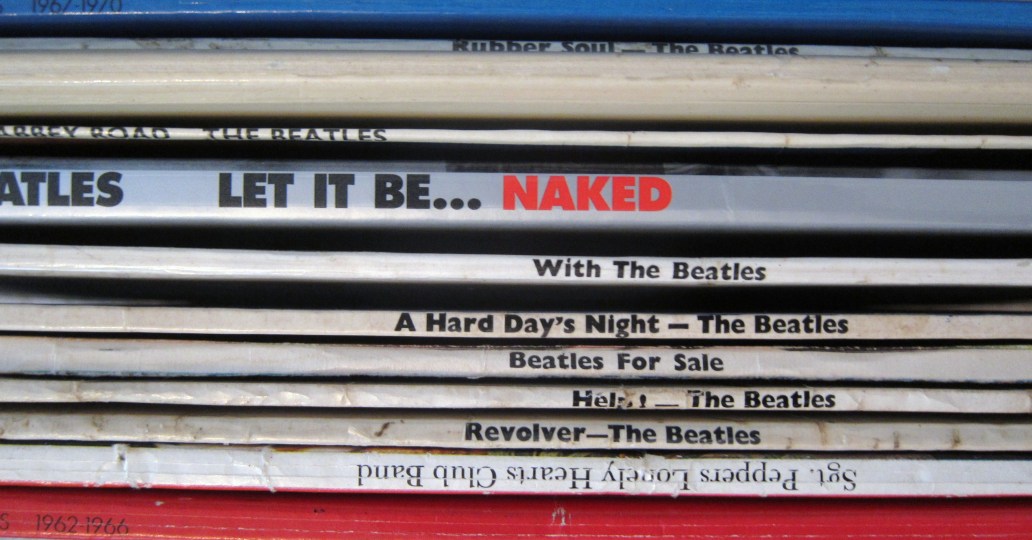 Buying The Beatles on Vinyl

Spoiler alert: This is Part 6 of a six-part series. If you want to start at the beginning – click this link.

The story so far: A bet has been struck between me and my friend Chris: Can I buy a complete set of Beatles records on vinyl for less money than the 2012 Re-issued Box Set? Deadline day is the 20th October. The clock is ticking and the stakes are high…the loser has to listen to a Mariah Carey album. Ten times. Trips to record fairs have found all but one of the records – for £200 – well under budget. But Past Masters is missing and impossible to get hold of. Out of options, I call Chris the day before the deadline to concede defeat.

So the day came when Chris was to come over to present me formally with a Mariah Carey CD. He was grinning like a Cheshire cat that had just eaten an entire can of Elmlea in one go…

“Bad luck!” he sympathised (insincerely) “So near and yet…” he let the words trail off…

“Mariah Carey eh? I never thought I’d see the day! Do wait until I have left before you put the thing on won’t you? And I want a screen shot of those play counts on your iTunes playlist: no cheating!”

I let him carry on a bit. With an unnecessary flourish he began to present me with a CD shaped packaged that he had wrapped in paper and had tied a little bow of ribbon around. But I had an ace up my sleeve.

“Just before I take the CD from you Chris, let me tell you about a funny thing that happened to me today” I began. I wore a poker face.

Chris looked at me. He hesitated.

“I took a call from Bob – from Leigh Records – just a couple of hours ago. He told me that a bloke came in with fifteen copies of Sgt Pepper yesterday. Isn’t it amazing what people come in with…?”

Chris looked wary all of a sudden. He waited for me to finish. He suspected something was up.

I let the words hang in the air for a while.

“….which Bob let me have for thirty five quid.”

My triumph was palpable. I allowed myself a smirk. I may have raised an mirthful eyebrow.

“And guess what else he had? A very rare double vinyl LP…of something called The Emancipation of Mimi by Ms Mariah Carey. Which he let me have for nothing!” This was true. Bob had been sufficiently tickled by the idea of the bet – and forfeit – to gift me this LP, which had been in stock for “quite a few years” without having been sold. He doubted it ever would be of interest to anyone…

Chris looked stunned. But he’s made of stern stuff. He wasn’t finished yet.

“Did he have the book?” he asked quietly.

The book! I had forgotten about the book! I thought quickly.

I ran upstairs and pulled out my copy of The Beatles: An Illustrated Record by Roy Carr and Tony Tyler. It’s a great glossy history of The Beatles that covers each of their records in turn – and is LP sized. Surely a reasonable replacement…?

To cut a long story short, after a stewards enquiry, (and an assessment of the book ‘s value on eBay / Amazon) the book was allowed.

So what did I learn from this adventure? Not only did I manage to buy an entire set of 14 Beatles Albums on vinyl for just (just?) £235, but a good proportion were early (i.e. sixties) or first pressings, that should hold their value. Will the new box set records be as good an investment? I don’t know. The seventies re-pressings clearly haven’t held their value like the sixties originals – but they are pressed on noticeably thinner vinyl: this will be the first time the complete set will be available on heavy 180g vinyl – so maybe that might help. I am sure audiophiles will enjoy the chance to play these records crackle-free on heavy vinyl, although I rather take the view that many songs were most often first heard on AM radios – and the magic of a record like Please Please Me is enhanced little by playing it on an expensive turntable. Not that I have one. I can’t afford it having shelled out all that money on the records.

Walking around the record fairs and bric-a-brac shops also got me lovely copies of Imagine, Aladdin Sane, Sound Affects, Bowie’s Stage and Low, the Red and Blue Best-of Albums…

…plus classic books such as Diary of a Rock n Roll Star, Shaky and Our Band Could Be Your Life – all for just over twenty quid. The Bowie record alone is apparently worth far more.

Of the new pressings in the Box-Set, The White Album looks like it will be the biggest bargain – I struggled to find a first pressing for less than £60 with the poster and photos, so the re-release (as an individual record) ought to be a good way to buy this LP for less money. I think Abbey Road and Sgt Pepper might also benefit from a 180g version.

And Chris? We shared a good bottle of wine to drown his sorrows. He’s probably listening to Mariah right now. I think he secretly likes it…

Record #115: The Beatles – I Feel Fine (PS watch this funny but badly-synced YouTube clip to see Ringo on a bicycle instead of his drum kit…)