Have you heard the new Beck album Songreader?

If you are taking a stroll through Leigh on Sea this weekend, and you hear the sound of some cats being strangled, don’t call the police straight away. It may just be me playing the new Beck album. Wait: that sounds bad. What I mean is, it’ll be literally be me trying to play guitar and sing along to the Sheet Music of the new Beck Album.

I think I had better explain.

Earlier this year, Beck Hansen announced that his new album, Song Reader, would be released not on vinyl, cd or as an an MP3, but as unrecorded sheet music. Song Reader, complete with full-colour, vintage style art for each song in a hardcover carrying case (and, in places, either ukulele notation or guitar chords), is an experiment in what an album can be in the 21st century. Or, if we are being needlessly cynical, is a great way to save on recording studio costs…

Beck’s New Album: But you have to play it…

The arrival of any new Beck album, of course, is always a cause for celebration here at Every Record Tells A Story.

Right from the opening slide guitar riff of Loser I knew Beck Hansen was One Of Us. I have a recording of an early Beck appearance on KRCW’s Morning Becomes Eclectic radio show where we hear Beck play a song called MTV Makes Me Want To Smoke Crack. Now that’s a song title right there.

Odelay followed, with singles New Pollution (with its sixties style video) and Devil’s Haircut – all rough guitar riff and cool. Quietly slipped on side 2 of the album was Jack-Ass – a ballad of genuine class.

Beck continued to produce indie-folk albums in between major label releases – something which set him apart from the crowd. One Foot In The Grave included the charmingly titled song Asshole – later covered by Tom Petty on the soundtrack to Jennifer Aniston indie flick She’s The One. Stereopathic Soul Manure featured Rowboat – covered by Johnny Cash on American Recordings II.

A couple of albums later, just when Beck was in danger of turning into an indie-Prince with Midnight Vultures, he dropped the bombshell of Sea Change on us all – a beautiful collection of mournful-yet-strangely-uplifting ballads and still a favourite of mine. And from Guero (which I played to death), to The Information and Modern Guilt there’s always something to enjoy.

The mention of cover versions is pertinent when we consider Beck’s latest album. Because that’s the only way we’re going to be able to hear Song Reader: Beck is partying like it’s 1899.

The artwork to Do We? from Beck’s Song Reader album

Perhaps it is right that on the 60th anniversary of the charts, an artist should decide to go back to How Things Used To Be before 7″ singles (ask your mum) made up the charts – because before then the charts recorded sales of sheet music. Some were illustrated beautifully to encourage people to buy: and buy they did – Bing Crosby’s Sweet Leilani sold 54 million copies of sheet music.  That’s more copies than Dark Side of The Moon and Back in Black combined. The artwork was frequently amazing – the LP covers of the first half of the 20th century if you will. Beck has sought to recreate this idea in the 21st century. Yes, I know: it’s bonkers. But good bonkers.

For those whose singing voices do not sound like strangled cats you can post your efforts online at songreader.net. For now at least, Beck is not going to record these songs himself.

I like the idea of replacing the immediate fix of a download with something that people will need to immerse themselves in. And not everyone can read music or play an instrument. Is listening to an amateur’s cat-strangled version online going to be as good as hearing Beck himself? But then maybe some talented people will do something amazing with these songs?

Perhaps the best way for me to get an early listen was to go to a playback of the album at Rough Trade East last night. Amongst those playing their interpretations of the songs was singer songwriter (and musical director of the project) Ed Harcourt, who was joined by Steve Mason from The Beta Band, Liela Moss of Duke Spirit, Liverpool band Stealing Sheep and former Libertine Carl Barât.

Ed Harcourt was joined by music journalist Pete Paphides for a Q&A that explored whether writing for sheet music changed Beck’s approach. It is something Beck mentions himself in the preface to the collection.

The first obvious question was: What’s the album like?

Ed Harcourt: “In the form that it is in, you could look at it as a bunch of old parlour songs…but the songs themselves are just really great songs. They are very easy to play, most of them, (albeit) there is one called We All Wear Clothes that is in 7/4 time. It doesn’t give a tempo on any if the songs, except “Agitated” or “Shuffle”. The whole point of the project is that it is completely open to everyone’s interpretation”.

Pete: Is it possible to assess it critically in comparison to other Beck albums?

Ed: “This is an amalgamation of sad, melancholy songs and some very funny ones – there’s some brilliant imagery and visuals in there. You could record it in a very modern way. And you could completely  re-record it. There’s one song (tonight) by Stealing Sheep where we have changed the whole arrangement – it’s completely different.

Pete: I think Beck would approve.

Ed: I read in an interview that he would approve. He wants people to interpret it in their own way.

Pete: When you write sheet music you probably write a different kind of song. I was thinking about how if you are a singer songwriter you can delude yourself that no-one is going to listen so you can be really confessional whereas if you are writing a song for a roomful of people…you wouldn’t write Pennyroyal Tea.

Ed: That’s a very good point. The (Song Reader) songs are very universal in their message. They are very sing-a-long-able songs…

Pete: “What I like about it is that it makes you think about the influence that recorded music has had. The confessional songs that Beck played left him vulnerable and open to hecklers. Loser is an example of a song he had to make people laugh”.

The proof, of course was in hearing the songs. Highlights included Steve Mason kicking off with a couple of simple slow-tempo Sea Change-esque ballads.

Leila Moss sang I’m Down – a sparky, more up-tempo number followed by America Here’s My Boy – something that sounded like it could have come from the soundtrack to A Fistful of Dollars. Ed Harcourt then sang another thoughtful ballad called Sorry. 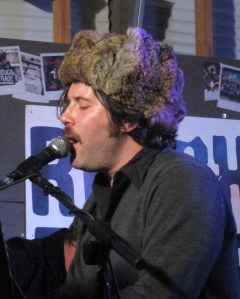 Ed Harcourt does his best impression of Rowlf the Dog from The Muppets. He forgets to release the ear flaps on his hat. Effect ruined.

Carl Barât sang a Marlene Dietrich style Why Did You Make Me Care followed by Rough on Rats. Good stuff. 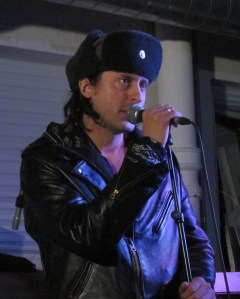 The highlight perhaps was Stealing Sheep’s version of Last Night You Were A Dream – which justified their tinkering with the song – it was lovely. All the singers then rejoined Ed on stage for stomping final song Do We? We Do, described earlier by Pete Paphides as sounding like a Yiddish folk song.

The songs were recorded for posterity, we were told, but until Rough Trade upload them somewhere, why not drag out your old acoustic guitar or piano, learn a couple of chords and have a go yourself?

It has to be better than listening to my singing…

Record #124: Beck – Old Shanghai (here’s a version I found on Soundcloud by someone called Rich Thomsen):