Home › Indie › Record Store Day: How was It For You?

Record Store Day: How was It For You? 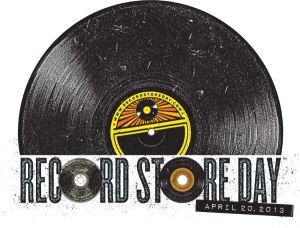 Yesterday, a large number of men were on their knees, crouched over a glossy picture, filled with an ecstatic mixture of lust, anticipation and relief.

That’s right, it was Record Store Day and we were all looking at our new purchases.

How was it for you?

I was pretty happy with my haul which included the David Bowie picture disc of Drive In Saturday. This was the fourth in a series of picture discs of his Ziggy-era singles which began with the release of Starman on Record Store Day 2012 with “Jean Genie” and “John, I’m only Dancing” following up later in the year. 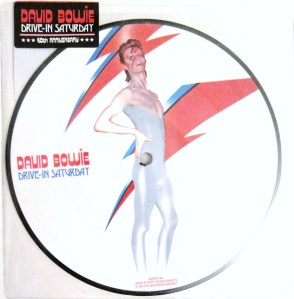 All have alternative versions of each single captured on them – this latest one is from the Russell Harty show in Jan 1973 – the show where he first announced the title of forthcoming album Aladdin Sane.

Fives Records was resplendent and busy. There was a DJ playing records inside, the owner’s niece sang some songs and whilst the first  paying customers allegedly arrived at 2am, there were 15 in the queue at 5.30am and by a quarter to eight I was 29th to line up in a line that stretched to about sixty people by opening. Later on, in a festival atmosphere, I saw local author Zoe Howe milling about in the midday sunshine whilst outside, some entrepreneurial folk from www.thefestivivalkit.co.uk were selling “Festivival Kits” including deodorant, earplugs, chewing gum, glowsticks and toothpaste (but not condoms, roll-ups and toilet roll…). Nice idea, and good luck to them. 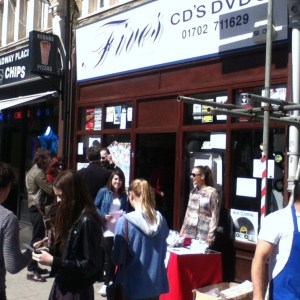 I also secured the David Bowie white vinyl 7″ of Where Are We Now / Stars Come Out Tonight, 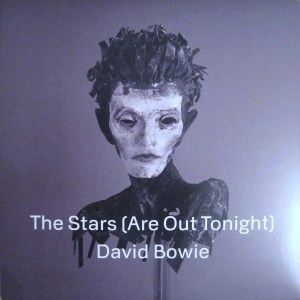 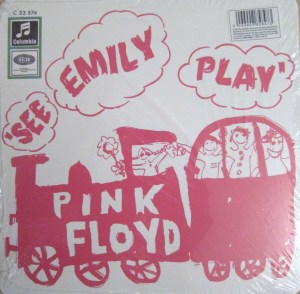 a nice re-issue from Tame Impala of their debut EP and Pulp’s last single. 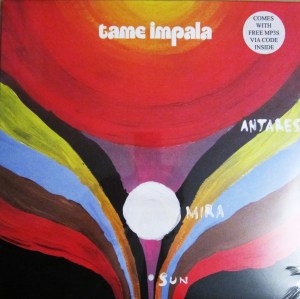 I did want the Mystery Jets (signed) double live album but Fives didn’t get any copies (they had plenty of everything else) but happily I had a friend at Rough Trade West who picked up a copy for me. In return he was unable to find a copy of the Moby/ Mark Laneghan 7″, a Brian Eno / Grizzly Bear 12″, and Can’s Ege Bamyasi played by Stephen Malkmus of Pavement in Rough Trade West, and so I (via Fives) was able to fill the breach in return. Happy Days and a good tactic as it happened…

Given my comments about the male dominance of record collecting a week ago, in the Record Store Day queue at Fives Records I was expecting to see perhaps just two females. I assumed both would be with their record-obsessed partners, looking at them perhaps in one case entirely supportively, and in the other with a look that blended boredom and frustration with disapproval quite superbly. However, in the event there was a decent splattering of both sexes – albeit perhaps still 90: 10 however.

So why is it mostly men who collect records? Do they believe a beautifully nurtured and tasteful record collection makes them more attractive to the opposite sex?

It does appear a somewhat quixotic pursuit to attempt to woo the opposite sex using a record collection. I can’t help feeling that you have more chance of seducing a woman whilst wearing a onesey. 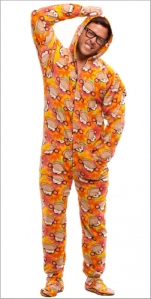 Sure, people tell stories of how a mix-tape won the heart of their loved one. But let’s look at the whole picture for a minute. I’m prepared to concede that a few couples may have got together because of a mix tape. (Leave a comment below if that’s you). But I’ll bet they are outnumbered by ten-to-one by people who were either a) horrified by their partner’s taste in music or b) were mildly scared by the slightly too-earnest attitude – and jumped ship at the earliest opportunity. How many fixed smiles have women given and how many sinking feelings at the pit of their stomach have they felt when a new boyfriend gives them a tape with a puppy dog look and all they can think is “You don’t expect me to actually listen to that do you? And you’re not actually going to stay with me whilst I do are you?” It’s the same feeling I imagine an embittered record executive gets when a new band gives them a demo tape.

Many years ago, someone I know well who shall remain nameless (let’s call her “my wife” for the sake of the story) was once introduced to a guy (who shall also remain nameless – we’ll call him “my friend Neil” just for the story) at a party. Neil (ok, that is his real name) proceeded to talk at enormous length and with no little accomplishment about the qualities of a band (let’s call them “The Smiths”) that he liked. After what seemed to be an hour and a half, my wife (for it was she) turned to Neil and asked him, “Are you always this boring?”

That, my friend, is pretty devastating to a Morrisey fan. He was so surprised, he almost stopped talking about them for five minutes. Almost. So not the best way to endear yourself to people then…

So putting aside that motive, could people collect vinyl for other reasons?

The other reason people give for collecting records is that their collection might be valuable one day.

I wonder how many people actually sell their record collections for a profit? In the majority of cases it is probably more likely that the collector will sadly pop their clogs whilst a house clearance specialist buys the lot from their still-grieving widow / widower for twenty quid – because actually she (let’s assume widow for a minute) is just glad to see the back of all that clutter her late husband used to obsess over and it’ll give her room for some more scatter cushions… (NB. the scatter cushion reference was a deliberately sexist comment included to check you’re awake).

So can Record Store Day bring couples together and spread love into the world?

Well – it’s not exactly meant to. It’s just a day when (mostly) blokes buy limited edition records of bands they like consoling themselves with the fact they have paid eight quid for a seven inch single by the thought that one day it will be worth something. (It will – probably three quid). Maybe, just maybe, two people will meet in the queue and find happiness together. I hope so. But not as much as I hope my new Bowie picture disc will increase in value over the next few years…

Like Loading...
‹ British Sea Power Panda To The Shepherd’s Bush Empire – Live Review
Why Do Most People Dislike Heavy Rock But Think One Direction Are Good? ›