London’s Rock Venues: Now And Then… 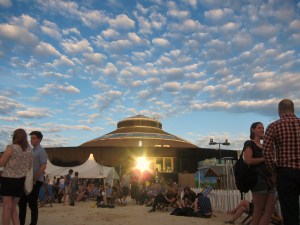 The beach at Camden Roundhouse

Let me set the scene:

1987. As yuppies carrying brick-sized mobile phones drank Champagne, wearing garish pin-striped suits and highlights in their hair, London enjoyed the benefits of a booming economy as well as its unfortunate side effects. These included a widening gap between the haves and have-nots, and the ghastly sight of yuppies wearing bad suits and carrying oversized mobile phones whilst drinking champagne.

Meanwhile London quietly continued its long held tradition of being a Mecca for live bands and barely a week went by without the capital hosting a bunch of ozone-bothering mullet-haired metal minstrels.

I therefore saw a lot of live rock bands in the late eighties. I had left school, found a job and spent the money I earned on records, seeing live bands, gig t-shirts and beer. The rest, as the saying goes, I wasted.

I tried to see as many of my favourite bands as I could, and was always looking to encourage my friends into coming to shows with me, and vice versa. This sometimes got me into trouble:

On one occasion I got on particularly well with a guy in the queue outside a show and we arranged to call each other when other shows cropped up. I didn’t have a pen, and this was before mobile phones existed so he told me where he worked and I looked up the number in the phone book. (That’s what people did back then. Extraordinary, I know). When a ticket for a band I wanted to see came up I called him at work. It took three baffling phone calls before I realised there were two people in his office with the same name and I had been put through to the wrong one. I had, in fact, invited a total stranger to come and watch “Dumpy’s Rusty Nuts” with me. Of all the bands I could have chosen…

We got there in the end…

Most of the shows I saw were in just seven venues. London’s rock venues have not changed hugely, but much like the bands that played in them, there have been a few casualties along the way. Here’s a run-down to give you an idea:

I still can’t get used to calling this most prestigious rock venue Hammersmith Apollo. A fully seated venue at the time – they hadn’t installed removable seats back then – its rock reputation was built by Bowie’s Ziggy Stardust swan-song and confirmed by Motorhead’s “No Sleep ‘ til Hammersmith” live LP which reached the top of the album charts in 1981.

Because of the seating, travelling down to Hammersmith after work on the tube to buy tickets at the box office (this was pre-internet) became a regular occurrence in order to get the best view. Iron Maiden played four consecutive dates in a row at Hammersmith on the Powerslave tour, saying they would rather play more gigs at the smaller venue than fewer larger Wembley Arena shows, and recorded side four of their Live after Death album there. The first ten or so rows of seats went to their fan club members only. Those were the days…

This was a 1,600-2,000 capacity venue near Tottenham Court Road with a (rarely opened) balcony area. Unusually for the time it didn’t have seats downstairs. The Astoria was the Peter Beardsley of venues: ugly, but capable of producing something pretty special from time to time. It may have sold weak lager served in plastic cups, but then didn’t they all? It did benefit from being small-ish and it allowed people to stand wherever they wished. Sadly The Astoria is now closed as it was badly located: right on top of the development of a new rail network through London.

3. The Town and Country Club

Now called The Forum in Kentish Town, this venue hasn’t changed too much, save for extra seats upstairs. You could sit at a romantically lit table in the balcony if you didn’t want to join the seat-free downstairs mosh pits. I saw both Robert Plant and Ozzy Osbourne play in this relatively intimate and atmospheric venue, but didn’t feel the romantic section upstairs was the most appropriate way to enjoy either gig.

For a time The Dominian hosted a number of rock bands in a somewhat bizarre setting, as this was a proper West-End theatre. It was like seeing bands doing panto. I saw poodle haired rockers such as Cinderella and Yngwie J Malmsteen there. It has more recently hosted “We Will Rock You” – the Queen musical, so it has retained it’s tradition of hosting poodle-haired rockers.

5. The Marquee, Wardour St and subsequently The New Marquee in Charing Cross Road.

Both great venues, (see this previous piece) the New Marquee was a relocation after the building that housed the original Marquee was condemned. Sadly it couldn’t recover from the shame of hosting Bros playing a secret gig there, and it closed in the 1996 after a property developer bought the site.

Winner of the “Worst Acoustics in a venue” award fifteen years in a row, against stiff competition from the slightly larger Earls Court. This was mainly because it used to be a swimming pool, so was never constructed with acoustics in mind. Wembley Arena famously had the honour of Motley Crüe cancelling a 1988 show there because of “the weight of snow” on the roof which apparently would have buckled under the strain of Crüe’s live rig had it been suspended from it. An excuse, naturally, that was utter nonsense. It later transpired (and was strongly rumoured at the time) bassist Nikki Sixx had actually “died” (and recovered) after an overdose on tour in Japan and was in no fit state to continue the tour.

I well remember travelling to Brixton for my first gig there as a somewhat green sixteen year old with some trepidation. Brixton earned a reputation in the 1980’s as something of a “dodgy” London neighbourhood after riots in 1981 and 1985.

My fears appeared to be well-founded as I stepped over a homeless person on my way out of the tube station (still a rare sight in the late eighties), but actually the venue was (and is) excellent considering it holds 4,000 people. No seats downstairs meant you could get down the front for a better atmosphere. The venue has changed little in the last 25 years save for having the name of a mobile phone company added to it, and as with all the venues, you no longer have to inhale the second hand cigarette smoke of the person next to you…

A generation later, in 2013 city boys and hipsters hold mobile phones smaller than the boxes of electronic cigarettes that they smoke whilst wearing skinny jeans (mainly the hipsters) and skinny suits (the city boys), whilst the gap between the haves and have-nots has grown faster than the price of gig tickets despite a limping economy. London meanwhile remains a live Mecca for bands of all descriptions, adding the O2 Arena, The Camden Roundhouse, Shepherds Bush Empire, Koko, The Village Underground, Islington Academy, The Troxy and plenty of others. In that time we have lost The Astoria and The Marquee. But we have also lost the champagne-guzzling yuppies in garish suits and highlights in their hair.