Home › Exhibitions › The Clash Pop Up in Berwick St, London

The Clash Pop Up in Berwick St, London 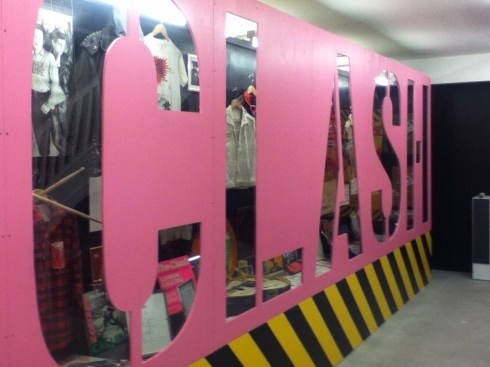 What has London ever done for us? Well, obviously there’s the literature, theatre, drainage system, architecture, trade and transport. That goes without saying…

There’s the shopping, the parks, the restaurants, museums, the multi-cultural mix, the vibrant night life – I’ll give you that…* Oh yes – then there was The Clash.

I’ll leave it to others to wax lyrical about the cultural significance of The Clash and their strong identification and links to London: there’s little I can say that Jon Savage hasn’t said better already, either in his excellent book England’s Dreaming or in his article in last week’s Guardian.

So let me just tell you about a pop-up store that has appeared at 75 Berwick St, Soho this weekend to celebrate the work of The Clash.

I say “Pop Up Store” like it was some kind of afterthought. Something perhaps the record company threw together after too many WKDs. But no. This is something else. I popped down to the pop up yesterday to have a look and I would go as far to say that if you are in London in the next couple of weeks and don’t see this store, you need to take a long hard look at yourself.

The ‘Black Market Clash’ store marks the re-release of the band’s back catalogue in fully remastered form, and is open until September 22nd in Soho with instruments, stage-wear, rare memorabilia and original manuscripts all on display. It’s stunning. I saw grown men in there almost weep with excitement. 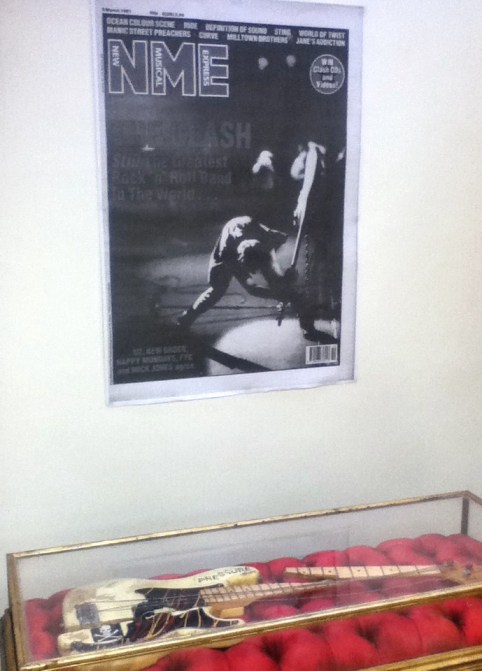 You know that classic Clash photo on the cover of The NME? The one where the guy is battering his guitar? THEY’VE GOT THAT GUITAR! Ahem, sorry to shout, but how cool is that?! The guy next to me reckoned it was insured for a million pounds. I have no idea whether there’s any truth in that, but it sounds good. 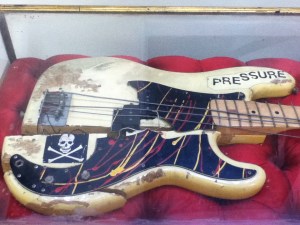 The venue is split into three sections. Downstairs is an exhibition of Clash artefacts including *that* guitar, posters, memorabilia and clothing all on loan from the band. There’s a Fender area where you can try to play some Clash songs alongside a resident Fender expert. I was tempted, but time didn’t allow. You could get a group together and book a lesson via Fender’s website at www.fender.com/theclashstore. On the ground floor are some more guitars, a place to buy merchandise and the new remastered albums, plus a Bowers and Wilkins listening booth or three.

The remastered albums are available individually or in a mock boom-box-style box set. There’s also a vinyl box set and a new best of collection. Some might question the relevance of a £100 box set of punk records, but why should punk not be preserved and showcased in the best way possible? Anyway, those old punks have grown up and may have wives or husbands and kids running around now. They’re going to want to annoy their offspring and spouses with some noise at some point – and what better noise than that of The Clash…?

As far as the exclusive memorabilia goes: you can buy one of three exclusive Clash tote bags…? Who buys these tote bags? When did they become a *thing*? It’s all a mystery to me… 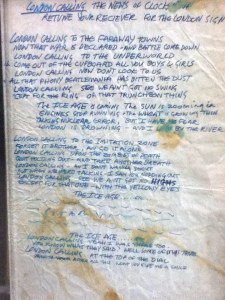 For the band however, it’s all been about the music:

“Remastering’s a really amazing thing. That was the musical point of it all, because there’s so much there that you wouldn’t have heard before,” Mick Jones remarked. “It was like discovering stuff, because the advances in mastering are so immense since the last time. We had to bake the tapes beforehand – the oxide on them is where the music is, so if you don’t put them in the oven and bake them, that all falls off, because they’re so old.”

The Clash remastered box set is out now.

* There’s also the Great Train Robbery, The Krays, the House of Commons and Brixton Riots…but I didn’t want to sound like Billy Joel’s “We Didn’t Start The Fire”…