An Open Letter To Simon Cowell: Dear Simon, Please Bring Back Top of the Pops… 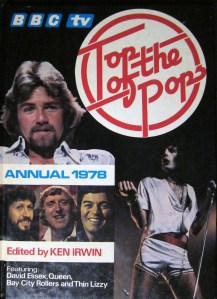 It is the 50th anniversary of one of the UK’s most loved and celebrated institutions today. No, not the anniversary of Simon Cowell‘s first Botox injection. It’s fifty years to the day that Top of the Pops first appeared on our screens. Along with Swap Shop, TOTP was my first window into the world of pop music and ran weekly between 1st January 1964 until 30th July 2006.

I didn’t realise how much I missed TOTP until the BBC began showing re-runs of the 1978 shows in chronological order on Wednesday evenings at 7pm. It’s unmissable stuff * and it is fun re-living ’70’s charts in the company of the whole family, (if I can get the kids to sit still long enough) watching classic performances from Boney M, The Buzzcocks, Blondie, The Boomtown Rats et al. Clearly you can’t sit through the fashions and songs of 1978 without the odd question popping up: “Hey dad – why is that Blonde lady singing a One Direction song?” “Hey dad, why do some songs just have girls doing weird dancing?” “Why don’t we see that DJ on TV anymore?” ** and “Hey, why do Manhattan Transfer just look like some middle-aged losers at a particularly dreary office party?” (The latter question was my own).

Sadly, Top of the Pops, like Santa Claus, now comes just once a year. It no longer captures the zeitgeist like it once did, say the detractors. There’s no room for a half-hour TV show playing just popular music to the whole family, they say.

This might have been true a few years ago, alongside statements like “Doctor Who was awful wasn’t it – all those cheap polystyrene monsters and rubbish special effects?”, “If only they would bring back dancing dogs and amateur variety acts on prime time TV” and “Isn’t “Through The Keyhole” terrible?” (Actually that last one still applies).

Now “Doctor Who” is the biggest show on TV, alongside “Britain’s Got Talent” – which is basically a re-vamped “Opportunity Knocks” – a hugely popular TV talent show from the ’60s and ’70s. It doesn’t take Sherlock Holmes to work out that the most popular shows on British TV at the moment are simply re-vamped old classics. From “Strictly Come Dancing”, to “Celebrity Masterchef“, to “The Great British Bake Off“. Old TV plus Reality-style element equals Hit TV.

So all we need is for someone to take the Top of the Pops format, take it by the scruff of the neck and turn it into water-cooler telly. And who better than Simon Cowell?

I know: you might easily also ask “Who worse than Simon Cowell?”. It might seem like getting into league with Satan, but on the other hand, what’s the worst that can happen? The thing is, I don’t think he’ll go for a Top of the Pops revival. We need to flatter his ego a bit. Here’s my suggestion in an open letter to Simon Cowell:

First of all I wanted to congratulate you on the amazing success of X-Factor. My family and I (I have two young children) love watching the way you get members of the public to sing badly in front of the cameras so we can all laugh at them – it’s very funny and brings us together as a family every Saturday night. This year we particularly liked that singer with the simple look on his face – what’s his name? Ah yes: Gary Barlow.

My reason for writing is that I have an idea for a TV show that I think you’ll be very interested in. I am calling it “Celebrity X-Factor”.

In my Celebrity X-Factor show, instead of getting members of the public to sing tunes that are written and performed by pop stars, the twist is that we’ll get pop stars to sing their own songs! Clever eh?! You can get all the big names like Tulisa (oops, maybe not * sniff *), Michael Bublé and Olly Murs or whoever is top of the charts at the time, and when they have finished, the judges can tell the artists how great they are (best not to rock the boat – I’m sure you know how temperamental these singer-types can get!). We could also look at the back stories of the artists in a sensitive way – you know, “Dave the drummer suffered tragedy after his lead singer shot himself, but now he’s in the Foo Fighters” kind of thing….

An alternative is to not have judges (it might put off the likes of Cliff, I daresay – so not all bad news), but for viewers to phone a premium number and vote for their favourite each week (always a decent money spinner!). As well as the phone voting, the public can also buy downloads of the songs and the purchase can also count as a vote. And you can count the number of streams on YouTube and Spotify too. We could have a league table, say, showing who’s Top of The P-, er, top of the “phone polls”.

The advantages of the show are:

Perhaps this “Celebrity X-Factor” could go on TV on Thursday nights in the old Top of the Pops slot at 7pm?

I can pop round to see you to discuss terms – just send your helicopter over when convenient.

PS My kids love the show: can you please send them a signed photo of the one from the Pussycats? For them. Not me. Many thanks.”