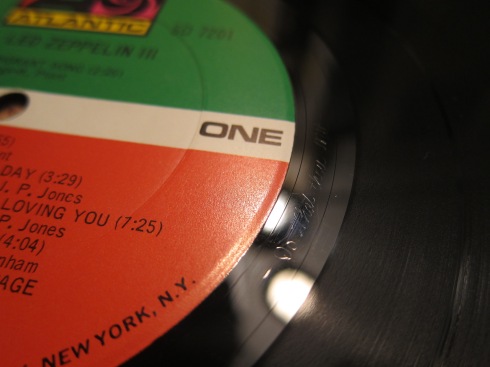 The “Do What Thou Wilt” inscription on Led Zep III

Want to know why some Led Zeppelin vinyl LPs sounded better than most other rock LPs? Read on…

It is received wisdom that the earliest Led Zep UK pressings – with a plum and red label, rather than the later green and yellow label – are the ones to have. They therefore fetch the most money. But received wisdom, I have discovered, is not always correct. 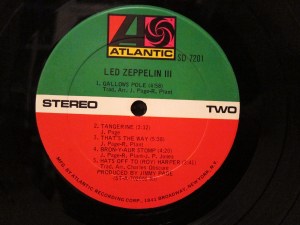 The US pressing of Led Zep III

When I first started building up my record collection again, my local record shop, Leigh Records, had a £40 UK plum labelled copy of Led Zep III and a US pressing for £7.50 in the same condition. I plumped for the cheaper version. This wasn’t because I have some sort of maverick vision or second sight as a record investor. It’s because I could get *almost* the same thing for thirty-two pounds fifty less, and a penny saved is, as the saying goes, a penny earned. However, a bit of impromptu research from some audiophiles* has revealed that in the majority of cases the US pressing actually sounds better than the UK one.

This is in contrast to the general rule of record collecting that if you buy an early pressing from the country of origin of the artist, you are most likely to be nearer the source tapes, and therefore the sound ought to be better. It seems Led Zep are an exception: they had such great success in the USA that this generally fairly reliable guideline doesn’t hold true – after the first album at least. I didn’t know it at the time, but my US pressing was pretty early and has excellent sound – probably better than an equivalent UK version. 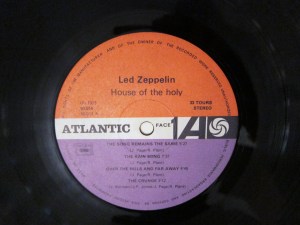 French Pressing of “Houses of the Holy”. Note the lilac label and “House of the Holy” title

Another thing you should know about buying Led Zep vinyl is that their first couple of albums are very, very expensive.

You shouldn’t be prepared to look for first pressings unless you are fond of shouting “— Me!” whilst you suffer a heart attack from fright.

The first pressings of Led Zep 1 are easily identifiable with Turquoise lettering on the front cover. Oh, and by the £1,500 price tag in mint condition. No, I don’t have one. Second pressings – still from the sixties and with orange lettering on the cover – are marginally less ridiculously priced, but may still set you back a few hundred quid if mint. No, I don’t have one of those either. I found one for twenty-five quid a little while ago, but it jumped, so I didn’t buy it…

Led Zep II is less expensive, and there are a couple of things to look out for: Top money for Led Zep 2 can be up to £250 for a mint first pressing – identifiable by a mis-credited “Living Loving Wreck” on the label. 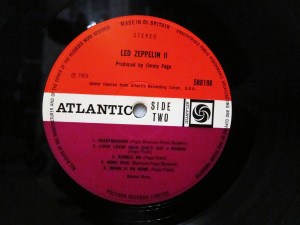 Still a first pressing, but without the “Living Loving Wreck” mis-print is a £60 copy in mint condition which lists “The Lemon Song”, crediting the writers as Plant and Page on the label. Later copies are c£40 and call this song “Killing Floor” with a credit to Willie Dixon – which if you have ever heard Willie Dixon’s song you will have some sympathy for. Look also for a light brown sleeve with a blurry green edge. However, whichever copy you look for, finding Led Zep II in great condition is harder work than listening to Depeche Mode’s third album.

This brings us to III.

Led Zep III is a terrific record all round. Ever try to play That’s The Way on guitar? It’s hellishly tricky – until you realise Page uses an alternative tuning (it’s an open-G tuning, the same one that Keith Richards uses to play “Rocks Off” or “Start Me Up” -and pretty much all of his songs) and then you just learn a few basic chord shapes and Bob’s your uncle (or should that be Jimmy’s your uncle?) – it’s actually pretty easy to play the basics. (Whilst we’re on the subject, “The Rain Song” from “Houses of the Holy” is another not-as-tricky-as-you-think song to learn – with an alternative tuning from low to high DGCGCD – that just sounds beautiful as you play it). 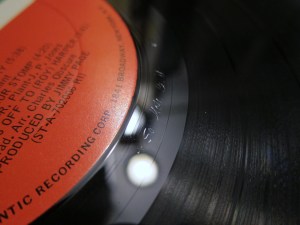 “So Mote It Be” inscribed on Led Zep III

Led Zep III also (shock horror) has the inscription in the run off groove of that Scottish master of evil magick Alistair Campbell, sorry, Alastair Crowley. “So Mote Be It” and “Do What Thou Wilt”, which led to  much apparently serious speculation as to whether Page, Plant, Bonham and Jones had sold their souls to the devil. Which just goes to show how gullible people were in the seventies…

With all of these albums, you can buy cheaper copies by targeting the eighties reissues on green Atlantic labels. These can be bought for substantially less, albeit on lightweight eighties vinyl. And there’s the rub. Because the value in buying any forthcoming re-issue will be in the quality of the vinyl – especially for the first four albums. If you bought your Led Zep vinyl in the eighties, or if your old copy is crackly, then these new versions ought to be better sounding copies – and that’s a good reason to buy.

The ’80s Green Atlantic label – this is Led Zep IV

Buying the later (Physical Graffiti onwards) albums on vinyl might not be so essential, because the original copies are still common and less expensive. The quality of the original vinyl is also very good:

As Led Zep’s manager Peter Grant revealed in a 1989 interview in Raw magazine:

“We first got the idea for Swan Song after Atlantic f- up the pressings for Led Zeppelin II. They actually ran off 100,000 copies which jumped all over the place because they didn’t follow Jimmy’s precise instructions on the master tape. So we just decided that it was time for us to take control of our own situation and ensure that Led Zeppelin were presented in the best possible manner. We oversaw every aspect of record manufacture. I would go down to the pressing plant myself and make sure that everything ran smoothly. And I discovered some very interesting things. For instance, the records are dipped during the manufacturing process into vats of acid right? But for Rock/ Pop stuff these vats are only cleaned out every six months. However, for classical records there are separate vats which are cleaned out every ten days! So, I persuaded the powers that be to dip Zeppelin’s albums into the classical vat, which is part of the reason why the sound quality on our albums was so good.”

However, even if better quality copies of Led Zep’s later albums (Physical Graffiti, Presence, In Through The Out Door) are plentiful, the promise of extra tracks may yet convince us to shell out the hard-earned…

As to whether the new reissues will be up to scratch? We’ll have to wait and see. I’m more interested in the extra tracks and outtakes Page has promised for Led Zep III and onwards. Should you buy? As Jimmy Page might say, Do What Thou Wilt…