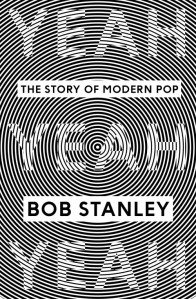 I had a terrific reaction from Twitter to my article about Bob Stanley’s history of popular music, “Yeah Yeah Yeah” back in May 2014…

Like a nervous boy asking out the prettiest girl in school to the disco, I enquired as to whether anyone would like to help set up a page of playlists to accompany each chapter of the book, and started the ball rolling with one of my own.

Never mind that whole “going to school” nonsense to get an education: all the (musical) schooling you would ever need would be contained in such a combination of book and playlists. What we sought to do here was no less than Make The World A Better Place.

Of course it turned out that someone cleverer and, let’s face it, quicker than me had already made a Spotify Playlist of the whole book. With two thousand nine hundred and sixty tracks it was quite an achievement. You can find the playlist here:

There’s another “whole of book” playlist by Keith Beattie via Twitter here:

There was also a YouTube playlist of a few chapters for those without Spotify from @AlbFreeman which is excellent. Here’s one for chapter eight:

But for those who didn’t want to chonk through three thousand songs in one playlist, there was still a gap in the market. My idea was therefore to devote a page of Every Record Tells A Story to sixty-five different playlists of each chapter of Bob’s book. In the same way that each chapter of Yeah Yeah Yeah features a particular period of time, or genre, or band, so would each playlist.

Bob said (via Twitter) about the idea, “It’s a noble project: I’m intrigued to see what people come up with”….

It’s now October 2014 as I write this – and the playlists are complete. What you have before you is a complete set of playlists for every chapter of Yeah Yeah Yeah – except the Beatles one – but then you know about The Beatles, right?

3. A Mess of Blues: Elvis Presley

4. Put Your Cat Clothes On: Sun Records and Rockabilly

10. Walk With Me In Paradise Garden: Phil Spector and Joe Meek

11. The Trouble With Boys: The Brill Building and Girl Groups

13. Needles and Pins: The Beat Boom

15. This Is My Prayer: The Birth of Soul

17. America Strikes Back: The Byrds and Folk Rock

18. Up The Ladder to the Roof: Tamla Motown

23. Crying In The Streets: Deep Soul

25. Bubblegum Is The Naked Truth: The Monkees

30. It Came From The Suburbs: Marc Bolan and David Bowie

32. The Sound of Philadelphia: Soft Soul

36. Beyond The Blue Horizon: Country and Western

37. Before and After The Gold Rush: Laurel Canyon

43. Islands In The Stream: The Bee Gees

44. Routine Is The Enemy of Music: Post-punk

45. Back to the Future: Two Tone and Mod

46. A Shark In Jet’s Clothing: America After Punk

47. This Is Tomorrow: Kraftwerk and Electropop

48. Adventures on The Wheels of Steel: Early Rap

52. Highs in the Mid Eighties: Prince and Madonna

53. Some Kind of Monster: Metal

54. Poised Over The Pause Button:The Smiths and The Birth of Indie

56. We Were Never Being Boring: Pet Shop Boys and New Order

57. Chicago and Detroit: House and Techno

62. This Is How You Disappear: Bristol, Shoegazing and a New Psychedelia

63. As A Defence, I’m Neutered and Spayed: Grunge

Like Loading...
‹ A New Way To Read The Best Music Book of 2013: “Yeah Yeah Yeah” by Bob Stanley
See Beth Orton, The Hosts and Scroobius Pip for £10 At Essex Festival The Village Green ›