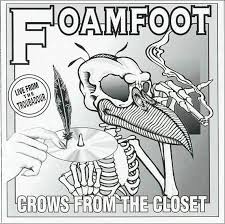 I’m going to take a quick look at some obscure recordings by The Black Crowes, but if your interest in this band has inexplicably yet to stretch to their officially released recordings (and apparently there are one or two people out there for whom The Black Crowes are but an empty page in their life story) then let’s give you a quick guide:

There’s some debate as to which of brothers Chris and Rich Robinson’s albums is their best, but a good starting point is second Black Crowes album “The Southern Harmony And Musical Companion”.

If that floats your boat, then debut album “Shake Your Money Maker” is a fun album and third album “Amorica” will interest those who enjoy the Americana aspect of the Crowes’ sound. Some may argue, but I reckon it’s a law of diminishing returns for every album after that, which is not to say they are without merit. * What is interesting about the unreleased recordings is that they were recorded during this fertile period around “TSHAMC”, “Amorica” and “Three Snakes and One Charm”.

The key lost recordings by the Black Crowes were the “Tall” and “Band” sessions.

Rich Robinson explained the background to the “Tall” sessions in an interview with Classic Rock Magazine in July 2001.

“’Tall’ was basically ‘Amorica’ but it just wasn’t recorded well so we went in and remade the record and some of the songs on there didn’t make it.”

It transpired the brothers had argued because Chris had wanted to make the album less guitar-heavy saying  “I really wanted to take away the big Black Crowes sound” . More importantly in the context of two further lost sessions was what he said next,  “I was into this whole idea of community, I had Jellyfish singing on a lot of things with me, big harmonies, and the Jayhawks would come over.”

The “Band” sessions date from 1997, pre-dating the “By Your Side” album and were scrapped in favour the latter album’s more commercial sound.

The good news is that the Tall and Band sessions aren’t lost anymore. Both received a belated release in 2006 and are an excellent addition to the canon. * When Chris Robinson speaks about community, however, he is obliquely referring to two other important Black Crowes related 1993 recordings: known as “Foamfoot” and “Sweet Pickle Salad”.

Jimmy Ashurst, bass player from the Ju Ju Hounds picks up the story…

“Around that time there were several jams with Chris (Robinson), Marc (Ford – Crowes guitarist), and Andy (Sturmer – Jellyfish drummer) – Chris was for the first time in his career living far from his brother and I think he was interested in seeing what he was capable of doing without Rich. The live shows we did, Foamfoot and Big Toe, were more for fun and we did covers of other people’s songs.”

The “Foamfoot” show was recorded and is now a widely circulated and much loved show. Consisting of Chris Robinson on vocals, Marc Ford on lead, Andy Sturmer(Jellyfish) on drums, and Jimmy Ashurst (Ju Ju Hounds) on bass, the band rattled through a set of ten covers and it is a terrific bootleg.

Even better was to come however.

The “Sweet Pickle Salad” group/sessions happened in Los Angeles on or about 15 August 1993, after the “Tall” sessions ended and before the “Amorica” session began. The group was made up of most of the people that played the Foamfoot show including Ashurst, with the addition of Craig Ross on guitar and Roger Manning (Jellyfish) on keyboards.  The style of the music is described by Chris, “The songs sound like a cross between CSNY and Pink Floyd: every song is 10 minutes long.”

Jimmy Ashurst continues, “With Sweet Pickle Salad (Chris) had some songs he’d written on his own that he wanted to record, and we happened to be the people he was spending most of his time with anyway, so he booked some studio time and we recorded four or five songs of his songs and it was a blast! We all had a great time playing that stuff and the performances by everyone were pretty amazing – especially considering how f- up we all were at the time. I don’t think any of us ever even considered the possibility of it ever being released… the Black Crowes were (and are) one of our generation’s best and most significant bands, and nobody involved would have wanted to be a part of anything that would have upset the sometimes delicate relationship between those two brothers. It’s a pretty cool thing to have been a part of it though. – [interview with Jimmy ‘Two Fingers’ Ashhurst, February 13, 2008 www.crowesbase.com]

Sweet Pickle Salad remains unreleased to this day. For many years only three songs circulated, of which one had some digital noise within. However in recent years a fourth song has emerged and the recordings cleaned up. A quick Google search will reward those who are interested – it is certainly a fascinating set and in many ways every bit as strong as anything The Black Crowes recorded.