It has been a busy week in the world of pop.

At the weekend (and on TV on Monday) was the MTV VMAs – Video Music Awards – traditionally the scene of all manner of unpleasantness generally involving pop stars cavorting with snakes.

In previous years viewers have witnessed the unedifying spectacle of Britney Spears and a white Python (Python Regius), whilst two years ago it was the turn of Miley Cyrus (irritantus minor) with prize snake Robin Thicke (Twattus misogynistus).

This year it was the turn of Nicki Minaj (Gluteus Maximus) to pay homage to Britney Spears (yesterdaysus newsus) albeit disappointingly not by shaving her hair off and falling off the rails, which might have made a more interesting spectacle. Minaj planned to repeat the snake trick, albeit with a boa constrictor (boa constrictor*) to accompany her song “Anaconda”.

Sadly however the snake, named Rocky, mistook one of her dancers for lunch, and, presumably driven out of it’s mind from Minaj’s music, took a bite. Although the show’s producers were doubtless conflicted, reflecting whether watching a snake swallow a dancer onstage might make a less unpalatable spectacle than Minaj’s derriére wiggling, eventually the snake was withdrawn from the show and the dancer danced on, snakeless.

This raised questions around animal cruelty (presumably the cruelty question is less of an issue with snakes because they are deaf), dancer cruelty, and the need for pop stars to perform with animals when they have a song with an animal’s name in it (you didn’t see the Beatles onstage with pigs and raccoons did you?), none of which are ever likely to be answered.

Speaking of cruelty to dumb animals, X-Factor returns for a new series this week.

Now in its thirty-eight year, thus knocking Last of the Summer Wine from its position of both “Longest Running TV Show that isn’t a soap opera” and “Longest Period of Time Between Anything Interesting Happening”, X-Factor will be hoping to arrest the decline in standards which has seen recent winners such as the Racist One compare unfavourably to historical winners such as the Bin Man One and The One Called Steve.

Once again some clueless wannabes will be trying to impress the public in order to win fame and fortune. And that’s just the judges.

“Sadly”, Tulisa Contostavlos won’t be one of the judges this series. She stood before a different type of judge earlier in the year after being entrapped by The Sun on Sunday newspaper’s “Fake Sheikh”. She was acquitted of setting up a cocaine-deal but more shockingly, remains guilty of the more serious crime of “having been in N-Dubz”, something which appears to have been swept under the carpet. The X-Factor producers will be furious when they find out.

Whilst many feel the series’ appeal is wearing thin, X-Factor still attracts viewing figures higher than Cowell’s belt. After all, where else can you watch a world class line up of people with borderline mental health issues to be laughed at? I’m still talking about the judges, by the way.

Speaking of which, there has been something of a cabinet reshuffle this year. Out goes Gary Barlow who steps down to spend more time with his money, and in comes motormouth Spice Girl Mel B and toilet attendant-smasher Cheryl Fernandez Versini neé Tweedy, (this week’s big exclusive: Cheryl turns up slightly late to launch party) accompanied by Cowell and former Boyband manager and Larry Parne wannabe Louis Walsh. 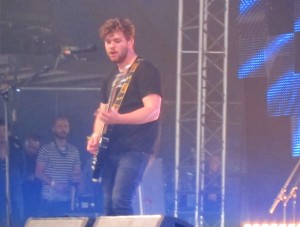 And finally, there’s a chart battle brewing for the number one album slot this week.

Ariana Grande (no, me neither) has allegedly topped the iTunes chart in seventy-eight countries, but thus far not in the UK and is looking to break her duck. Playing the role of Joe Dolce’s Shaddupayaface to Grande’s Vienna**  are those noisy noise-makers and Every Record Tells A Story favourites Royal Blood.

A debut number one album would be quite an achievement for the Brighton duo, so let’s wish them the best of luck.

For the avoidance of doubt, Royal Blood’s debut album is available at all good record stores.

* irritatingly for the purposes of the joke, the boa constrictor is one of the few members of the animal kingdom with the same Latin name and common name.

** That’s a chart battle reference for anyone who remembers the eighties. Shaddupayaface was a novelty song that kept Ultravox’s po-faced yet magnificent Vienna off the top spot.