Five Reasons Why You Should See Van Morrison In Concert

Tom Jones and Van Morrison: Live at the O2 Arena 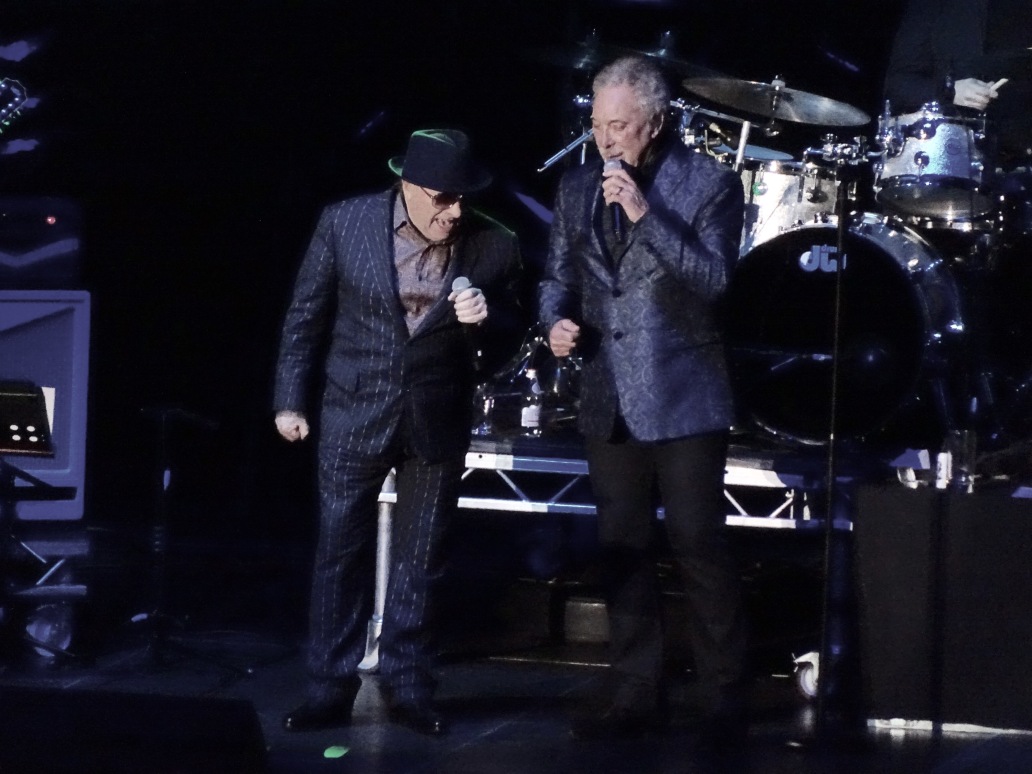 According to Sir Thomas Jones Woodward, it was way back in 1965 that he and Sir George Ivan Morrison Jr. first played together in a club called the Starlight Room. Some fifty years later these two Knights of the Realm, with over a hundred years performing experience behind them co-headlined London’s O2 Arena last night, as part of the Prudential Bluesfest. 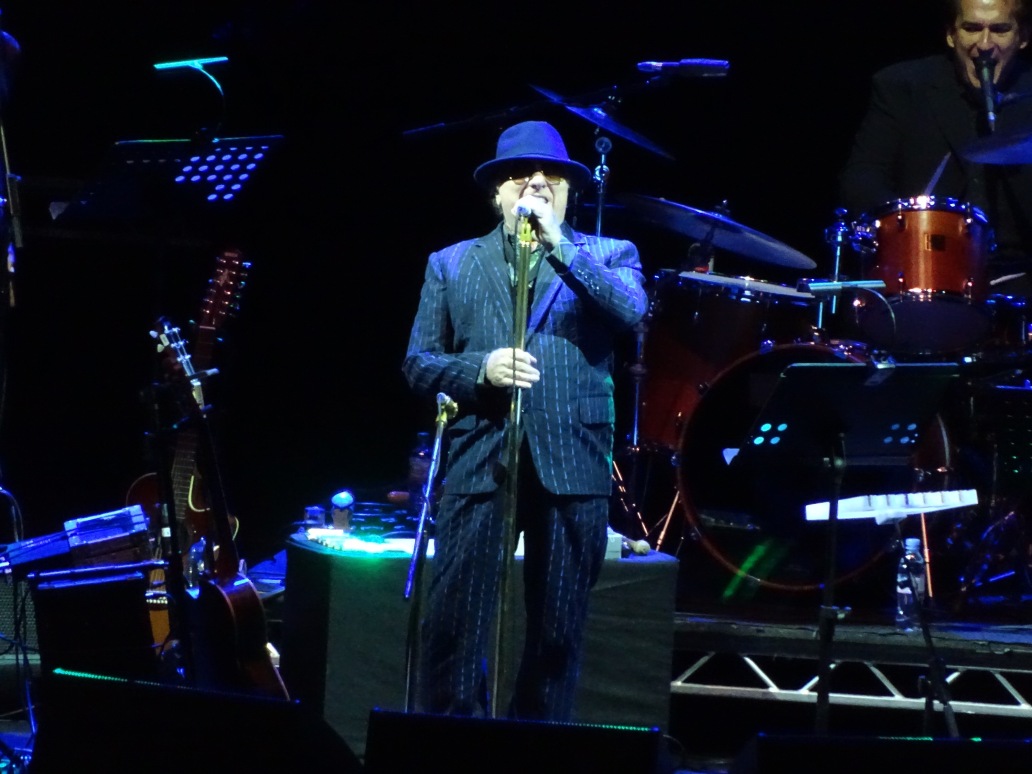 There are many reasons why it’s still worth watching Van Morrison in concert. Here are just five: Ah, I’m being mischievous. It was something of an odd bill, bringing together the Welsh Elvis with Van “The Man”, although the two did collaborate once before on Jones’ 1999 “Reload” album with “Sometimes We Cry”, a song written by Morrison.

But a word about Tom Jones here: to give him credit, Tom Jones’ new material, including songs from new album “Long Lost Suitcase” produced by Ethan Johns, sounded good last night, although I could have lived without the bluesed-up version of “Sex-Bomb” and the fact it took him just six minutes to mention his friendship with Elvis Presley. You can take the boy out of Vegas….

But the duets at the end of each set were a joy. 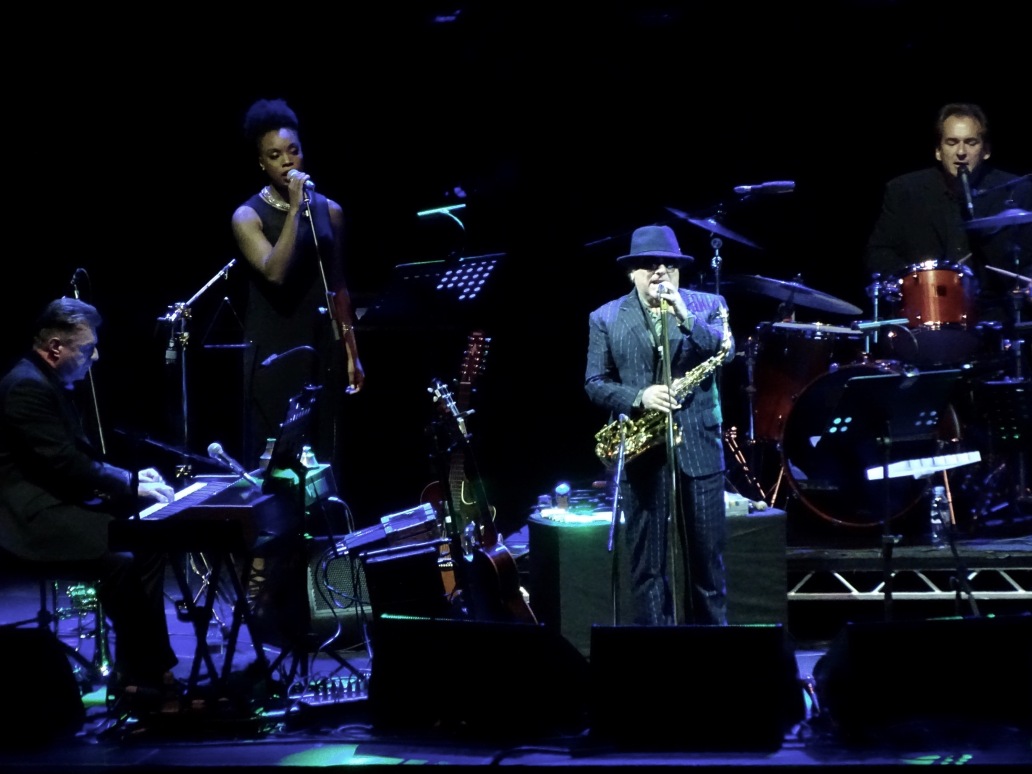 2. Van Morrison has still got it.

With a combined age (yes, let’s get it out of the way) of one hundred and forty five, Jones and Morrison might have been forgiven the odd cracked voice or rheumatic cough, yet none were forthcoming. True, there were no pelvic thrusts from Jones, or high kicks from Morrison, but then the latter never was great at high kicks, as this clip of his triumphant performance in Martin Scorsese’s “Last Waltz” will testify…

Morrison is more demurely dressed nowadays in his gangsta suit, dark sunglasses and a hat that Pharrell Williams would cast envious glances at.

Nevertheless, even if the combined age of Morrison and Jones is exactly the same as the whole of One Direction AND Simon Cowell, at least they have far more great music to show for it….

Morrison’s voice remains an extraordinary instrument – as great as ever – it was powerful, expressive and soulful. He sounded exactly as you’d expect Van Morrison to sound like, singing well and looking engaged, and having a good time, which for someone as famously grumpy as he, has to be a good thing. 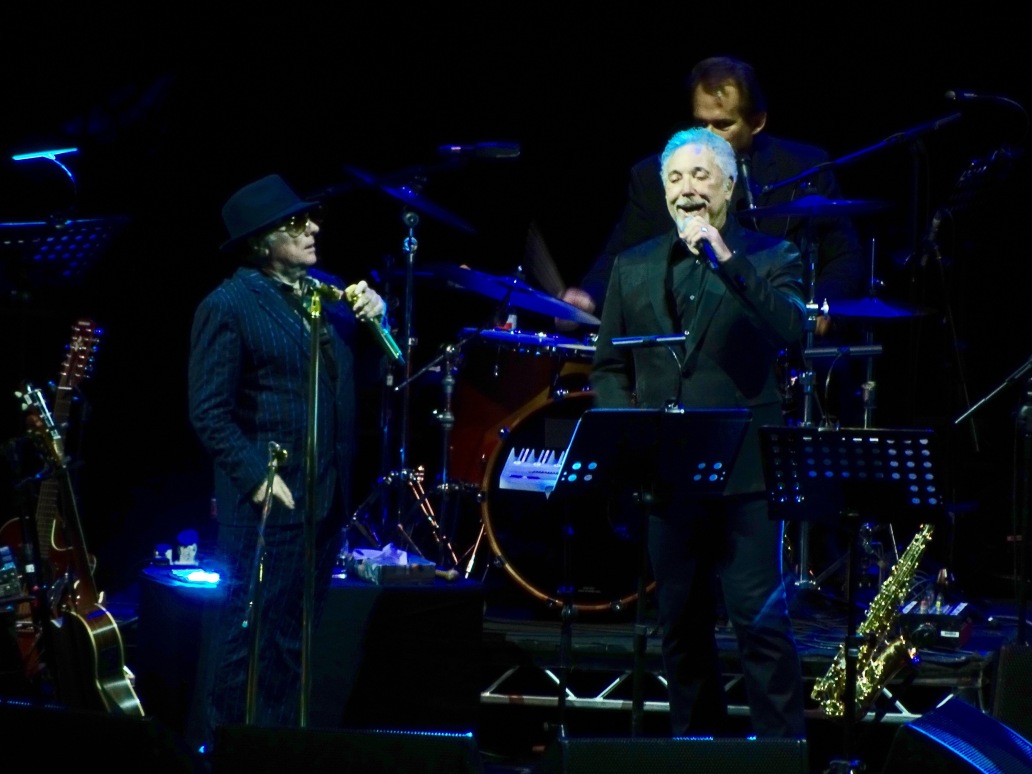 Alternating between what Morrison described as his “club set” and the one for bigger arenas “which pays the bills” his band slipped smoothly between jazz-inflected songs like “That Magic Time”, and the bouncy Sam Cooke sound-alike “Precious Time” with aplomb, equally at home with Jazz, Celtic soul, and blues. 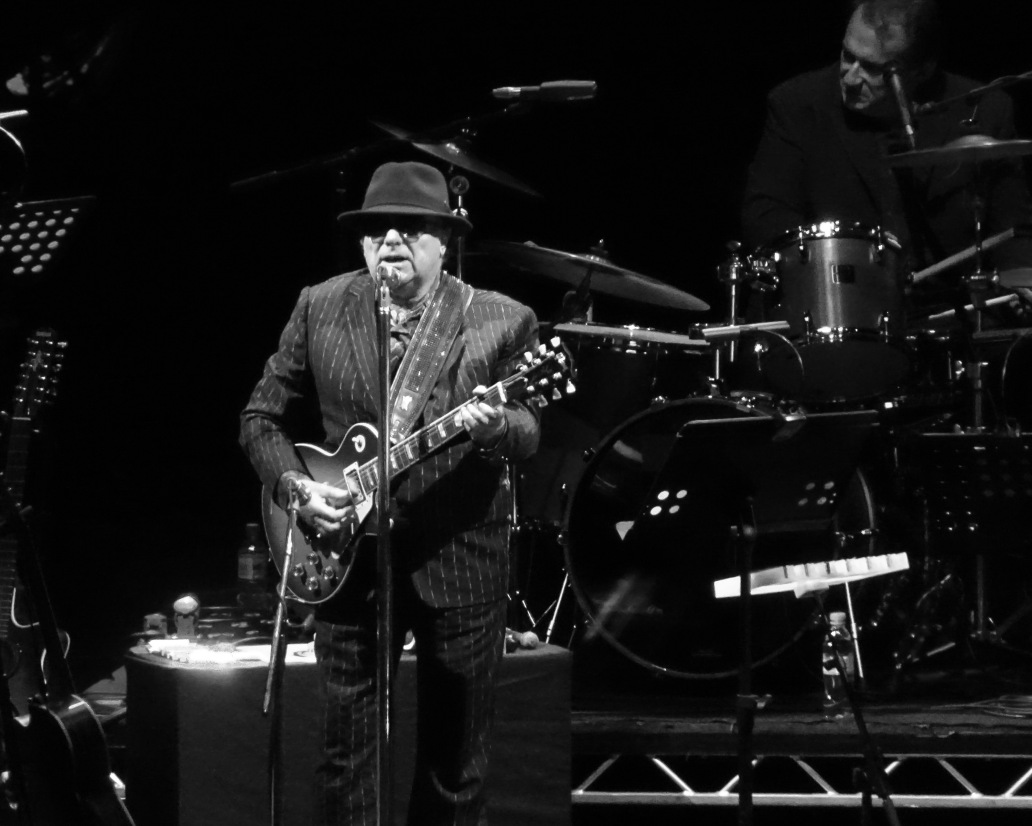 It’s very rare in rock n roll for an artist to produce a series of strong albums one after the other. Bowie did it in the seventies, Neil Young did it. There’s The Beatles and The Stones… Dylan has just released a box set of out-takes of his run of three epoch making LPs that included Bringing It All Back Home, Highway 61 and Blonde on Blonde.

Van Morrison had a great run too, one that kicked off with Astral Weeks and incorporated the likes of Moondance, St Dominic’s Preview, Tupelo Honey and Veedon Fleece. It’s fair to say that there’s sufficient great music in just those five albums mentioned that you could be forgiven in not truffling through the rest of his vast catalogue.

But if last night demonstrated anything, it was that there’s plenty to enjoy elsewhere, as not a single song came from those five albums. Nowhere was this better illustrated than on the final song, “I’m Not Feeling It Anymore” from 1991’s “Hymns To The Silence” album, an album so obscure that even the hippest hipsters haven’t heard it before you did. 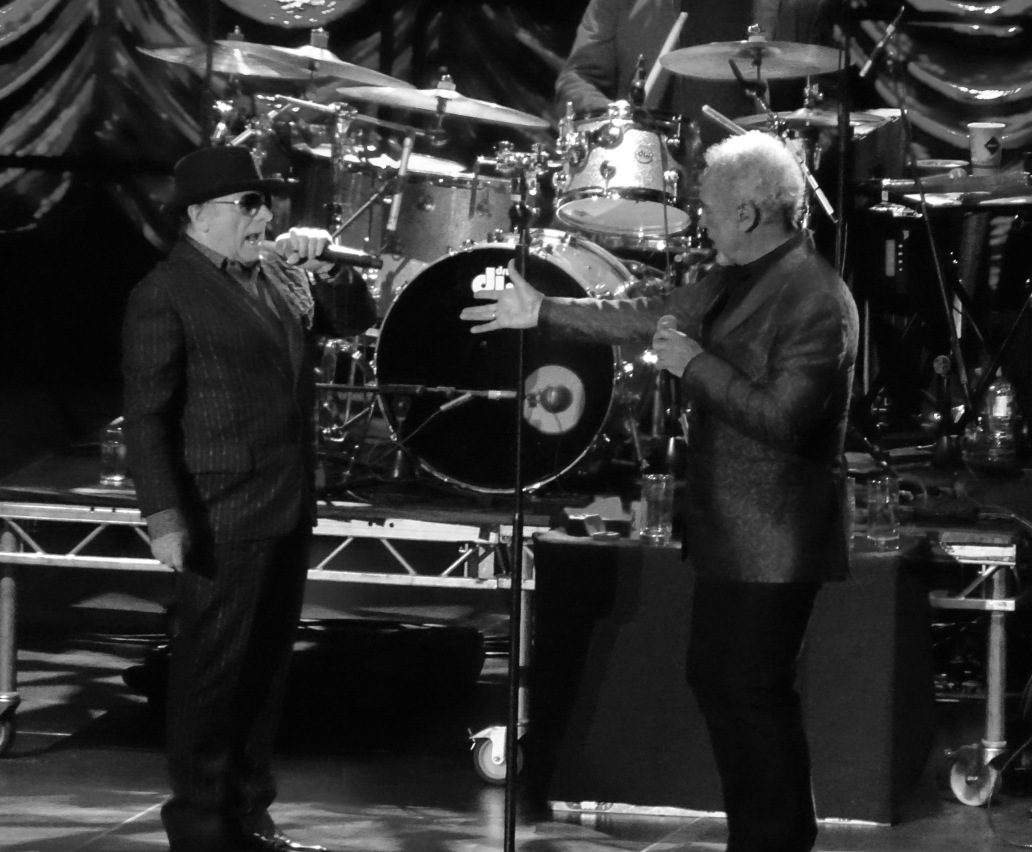 5. Van Morrison is one of the last great originators of the British Invasion.

Fifty years ago his band tore through great r’n’b songs like Gloria. Last night, the Northern Irishman’s take on blues songs like “Parchment Farm” (mixed with “Baby Please Don’t Go”) was extraordinary, he played harmonica, guitar and sax at various points and was equally adept with each.
If Van Morrison was just a great singer, he would still be up there with the greats. That he wrote (and is still writing) all those great songs is all the more impressive…see him while you still can. They don’t make ’em like that anymore…

Celtic Swing, Close Enough for Jazz, Sometimes I Feel Like a Motherless Child, Days Like This, Baby, Please Don’t Go / Parchment Farm, Playhouse, Precious Time, In the Afternoon / Ancient Highway / Country Fair, I Can’t Stop Loving You, Magic Time, It’s All in the Game / No Plan B / No Safety Net / Cry Cry Baby,Sticks & Stones,What am I living for , The Lonesome Road, I’m Not Feeling It Anymore

Burning Hell, Run On, Didn’t It Rain, ‘Til My Back Ain’t Got No Bone, Sexbomb, Tomorrow Night, Soul of a Man, Take My Love (I Want to Give It All to You), Don’t Knock, Raise a Ruckus, Elvis Presley Blues, Tower of Song, It’s not Unusual, Baby It’s Cold Outside.

With Van: What Am I Living for, Goodnight Irene, Sometimes We Cry, Strange Things Happening Every Day

Like Loading...
‹ A Degree in Record Collecting? Could you pass the qualifying paper?
Chaos and Beauty: The Story of Mercury Rev ›