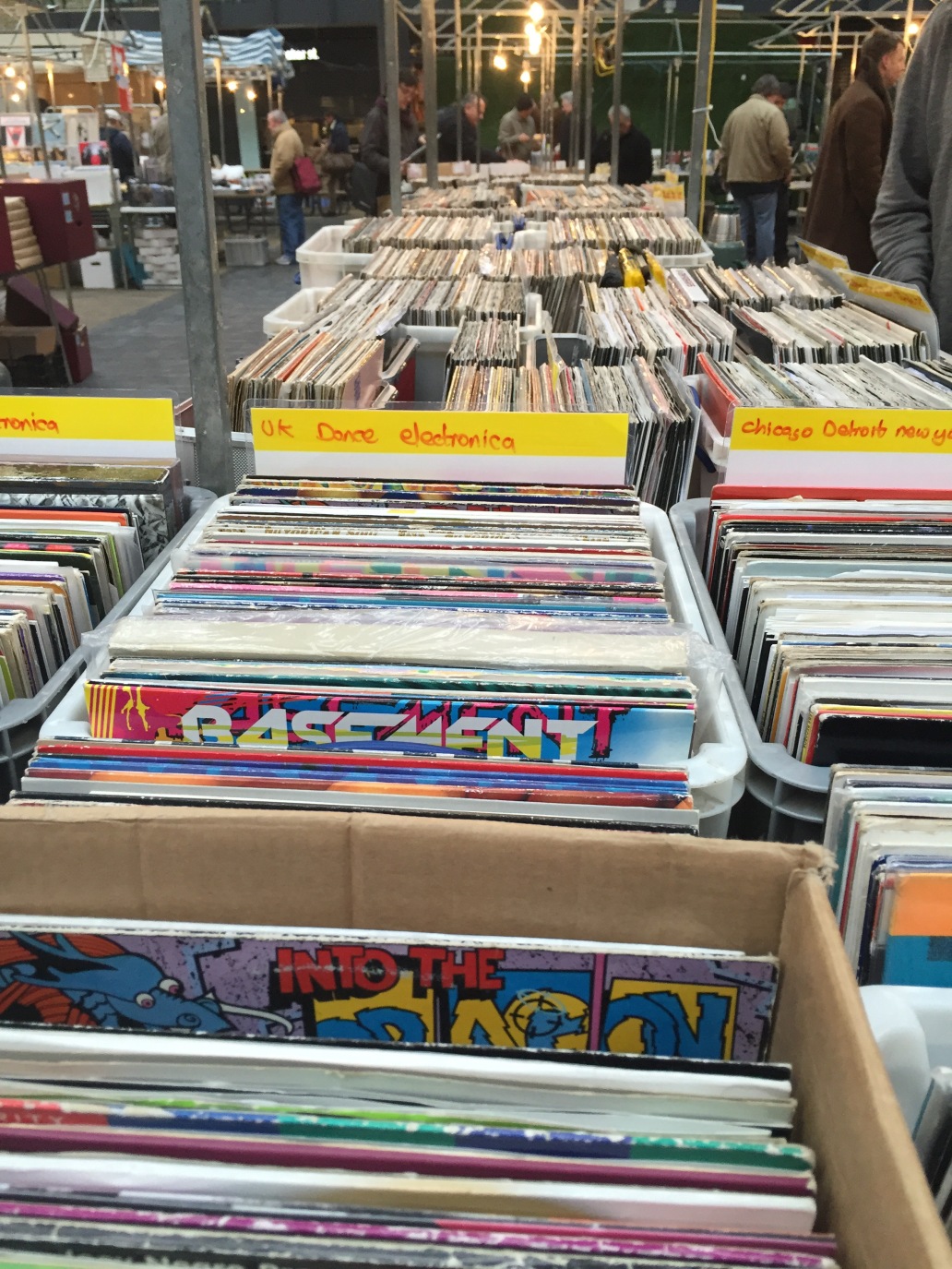 The Project: Is it possible to make a “Deluxe” Vinyl Box Set of Neil Young albums from the original vinyl rather than spending lots of money on re-issues? I am trying to find out…

The Story So Far: I have Zuma and Time Fades Away, but need two more albums to replicate the official “Series 5-8” Box Set. Once everything is found, the box set is going on eBay – at cost – for one lucky person to (hopefully) enjoy… But Time is Fading Away fast (see what I did there…).

In the same way that the slightly-wounded-antelope-filled plains of the Serengeti appeal greatly to hungry lions, so does the Spitalfields Record Fair in London appeal to the grizzle-faced record collecting fraternity. There’s the thrill of the chase, plenty of choice and a chance to separate the weak/cheap from the rest of the herd, if that’s not stretching the analogy a bit too far.

Mind you, it wasn’t exactly bursting with Ditch Trilogy Neil Young albums on the day I went looking for them…

With Zuma and Time Fades Away secured, I was half way there, with just two albums to complete the DIY Box Set, namely:

Having searched at one “most likely” stall for twenty minutes with no luck at all I was starting to feel a little grumpy. At the last fair, that stall had two copies of “On The Beach” buried away somewhere, but both appeared taken. Then, just as I was losing hope I finally found some Neil Young albums:

Then “Stars and Bars” and even “Trans”, then copies of “Harvest” and “After The Gold Rush”.

“Here’s every Neil Young album you aren’t looking for…” they were saying. I was half expecting copies of the still unreleased “Chrome Dreams” and “Homegrown” to pop up. I got the uncomfortable feeling if I turned my back the records would start laughing at me, so I bought “Stars…” and “Comes a Time” just to spite them (and because £5 was a good price).

I moved on, slightly shaken.

At another stall I found both albums, but “On The Beach” was £45 and “Tonight’s The Night” was £25. At that price it would have made more sense to buy the reissues. However, I had picked up my own copy of the latter for £15, so felt £25 was too steep. What’s more, the copy of “On The Beach” wasn’t even a first pressing.

You can easily tell an early pressing of “On The Beach” because it has a nice floral pattern on the inside of the LP, similar to the kind of material that garden furniture was made of in the seventies and eighties and, if you live in the sleepier parts of the Home Counties, the nineties. 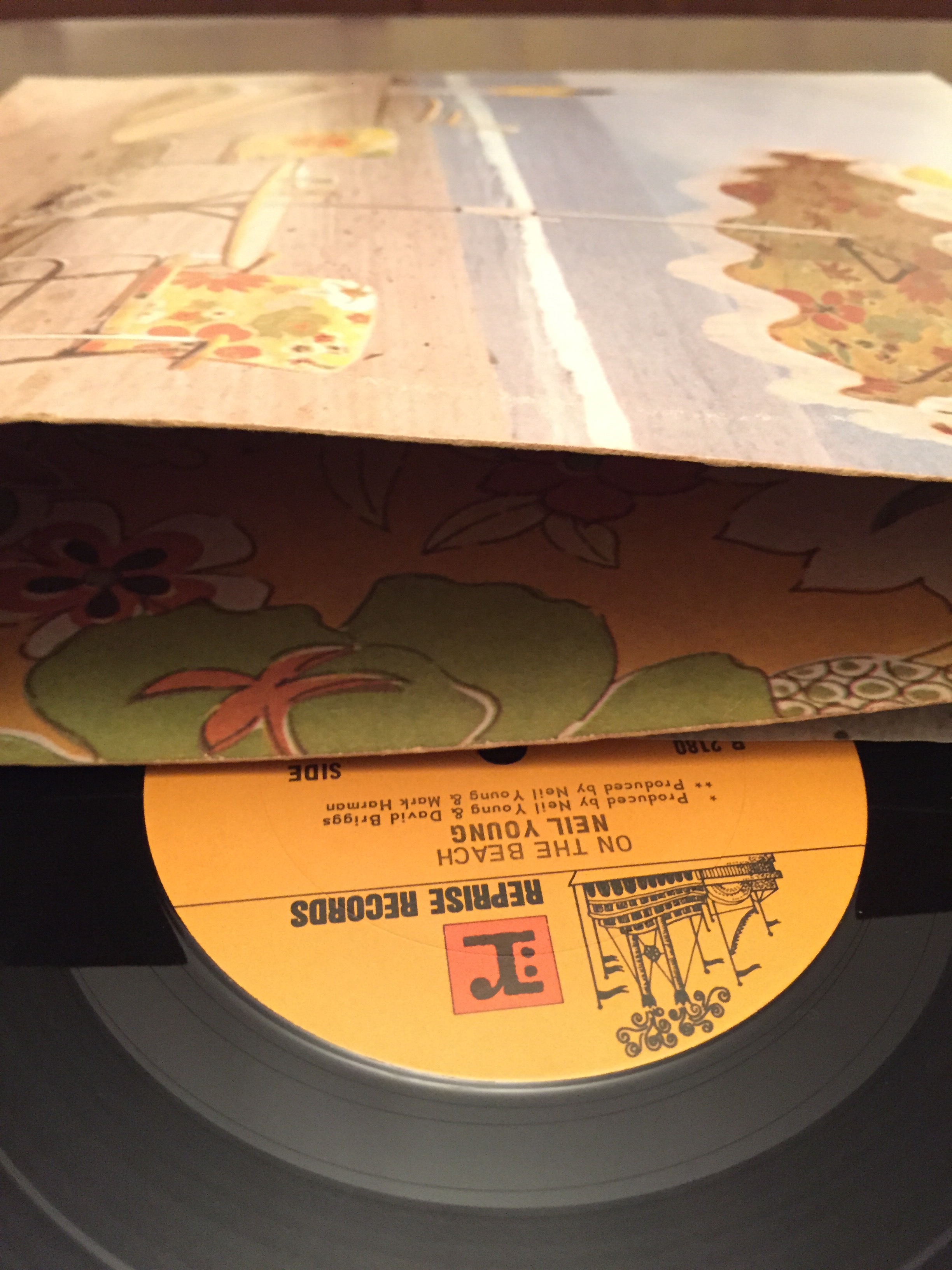 The sleeve of On The Beach. Note the patterned interior.

A vendor charging £45 for a later, plain-sleeved copy was rather chancing his arm I felt. It’s a bit like a car salesman trying to pass off a rusty, brown C-reg mini as brand new, or having someone tell you the current Drifters line up is the original one.

It was time to negotiate.

Record fairs are friendly places. The sort of all too rare gatherings of like minded souls where a beginner may attempt to barter without risking a punch in the mouth, especially given the variables around the price and condition of every item. However, you have to know your limits. I didn’t bother with “On The Beach”. If a vendor thinks a record is worth more than twice its *actual* value, he probably also believes in unicorns, goblins, that rich people pay tax and  Gary Barlow has talent, so it’s best to leave him to his delusions. On the other hand, this particular vendor had a very nice copy of “Tonight’s The Night” which a sensible offer might just make affordable.

It had the “Waterface” inscription on the run out groove of the LP but no insert. The original insert had a fake suicide note written by “Waterface”. All very strange. It was a UK pressing with a yellow label, not black as per the US pressings.

After a brief and friendly exchange I secured the LP for an acceptable £17.

I looked everywhere else, but there was no sign of another copy of “On The Beach”.

I drifted to a final stall, and slightly in desperation I asked a vendor if he had a copy of “On The Beach”?

My heart leapt. Not only did he have the album, but it was at a bargain price! I didn’t hold out much hope it would be a first pressing, but you never know!

There have been disappointments in history. Take the Trojans. They thought the Greeks had left their children some lovely toys, only to wake up in the morning to find their impregnable city burned to the ground.

Now I’ve had a few bitter, crushing disappointments in my life, including listening to The Killers’ second album, but few were as bitter and crushing as how I felt when I found this…..

This was surely the Road To Hell for any box set. I thought about it for a moment, but concluded it wouldn’t do to slip that in and hope for the best. My 100% eBay feedback would be on shaky ground…

Then I found another stall I had previously overlooked and this one had an entire Neil Young section. I said a silent prayer and dived in. Not literally, obviously. That would have been most unseemly.

Oh joy! This seller had what must have been the only other copies of On The Beach in the market that day. And he had two copies. Both early pressings with the garden-furniture-print inside, with original inner sleeves, one UK and one US, both on sale for £20 each. It was a fair price. I took a while, compared the two – there was little between them condition-wise, and plumped for the US version on the grounds that as a US artist the US pressing would likely sound marginally better.

the US pressing of Neil Young’s On The Beach

A quick round of negotiation secured the LP for £18: that was £35 spent on the day against an asking price of £45. A good morning’s work, and the box set was complete!

The complete Neil Young Box Set – with all the original albums

Total cost of the box set was as follows:

Compared to the £106.35 that the re-release is currently being offered for on Amazon, that’s a bargain. 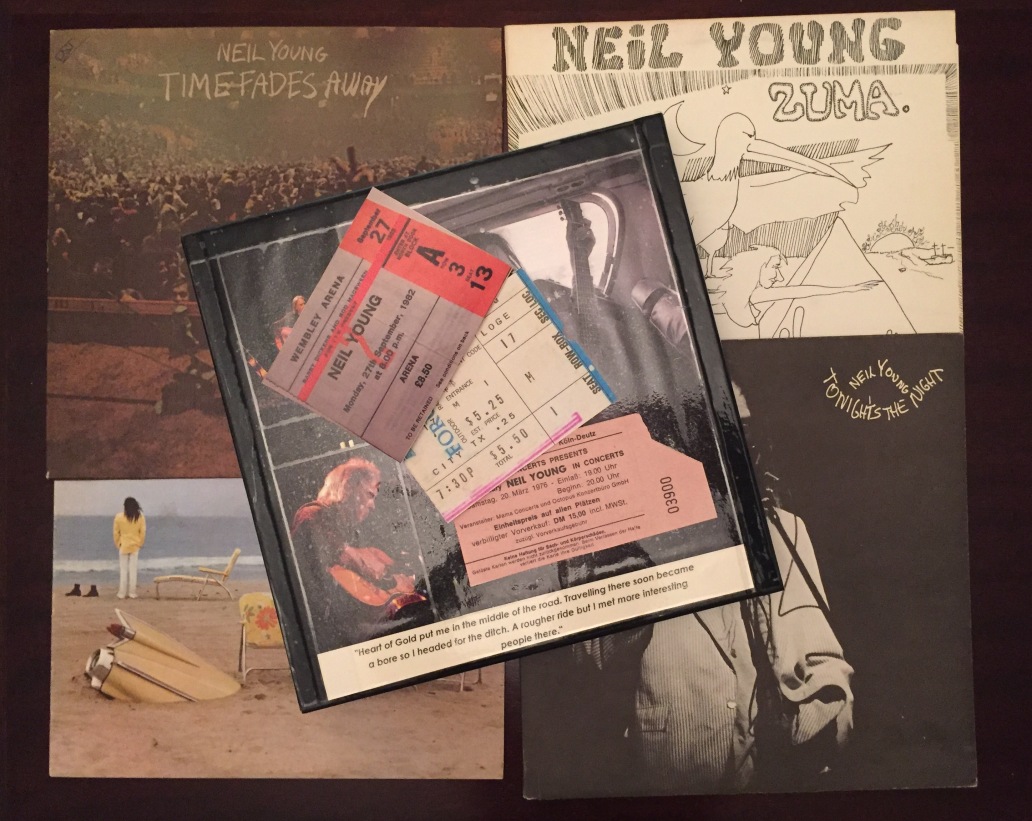 How much better is it to get really good sounding original copies of the albums, all pressed from the original stampers, all guaranteed analogue (because digital didn’t exist then) and all over forty years old, (thus being sixty years closer to being *actual antiques*) rather than buying mere replicas for nearly twice the price?

So now comes the hard work…

I already own copies of these albums. I’m slightly jealous of the copy of Zuma in the box set, because the previous owner of my own copy used that inner as a colouring book. But overall I have no need of the box set, so I’m now going to put the Neil Young Deluxe Vinyl Box Set: DIY Edition for sale on eBay.

If no-one buys it, I’m going to look a complete idiot.

Even more than usual, that is to say…

But surely there’s someone out there who’d rather have the original albums than replicas? Or someone who couldn’t afford the official box set but for whom now the price is affordable?

That’s a bargain for original copies of those four albums, all of which I have played and can confirm sound great…

You even get the exclusive liner notes, and – some might say crucially – some chocolate. 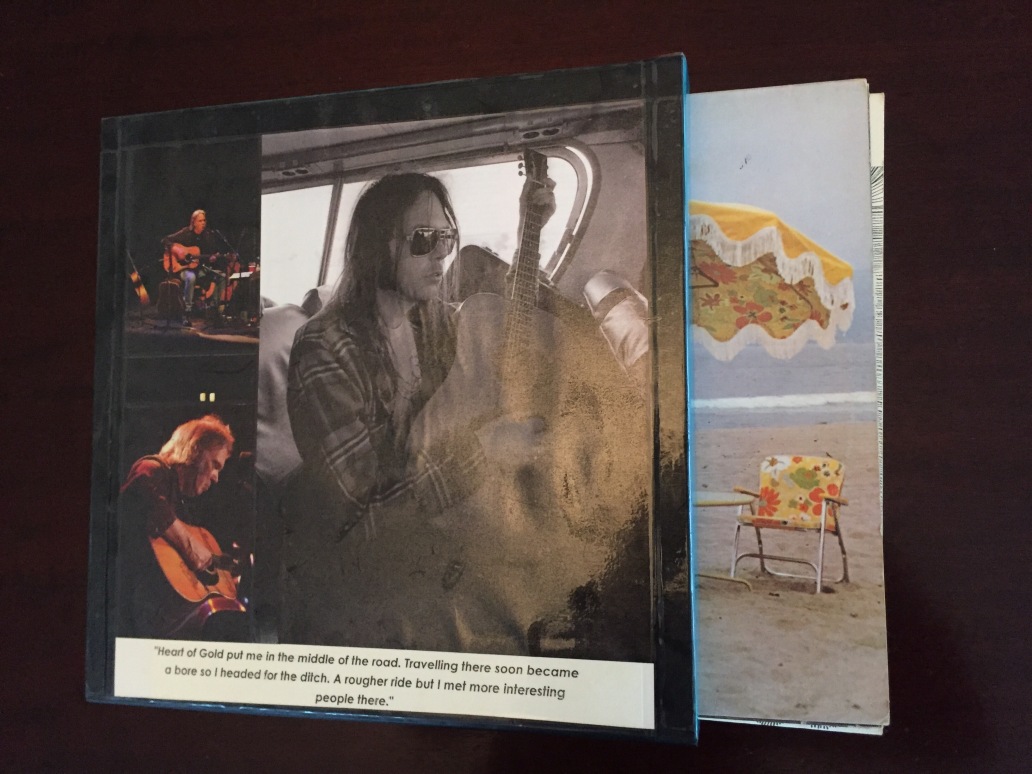 Here’s the link. I hope there’s someone out there who will love having the collection of albums wrapped in all that lovely tissue paper.