Home › Music › How To Buy Nick Drake On Vinyl

How To Buy Nick Drake On Vinyl

Chris Davidson was a bit pushy.

He was also not the tallest boy.

He wanted to join a band at school called The Perfumed Gardener.

Rehearsals were in the school hall at the not very rock n roll time of first thing in the morning, in order to avoid unwanted attention from killjoy schoolmasters.

But Master Davidson was out of luck.

The Perfumed Gardeners didn’t want him.

He could have joined Sex, Love and Society. Or Les Blues en Noir. I suspect the ideal fit might have been The Four Squares. Even if they became The Five Squares. Such was life and band names at the elite fee-paying school that was Marlborough College in 1965.

And why would The Four Squares have been ideal for this short, pop-loving, unfashionable specimen?

Because these are all traits that would never leave Chris Davidson, even when he later pursued a successful singing career and changed his name to Chris de Burgh.

De Burgh might have had a big guitar, but the band he wanted to join were a year older than him, and it wasn’t enough. He just didn’t have the right image.

What’s more, De Burgh’s pushiness got the back up of the leader of The Perfumed Gardener, a popular Marlborough sprinter who, as a result, rather cruelly wouldn’t let him join in.

The sprinter was enjoying his life at Marlborough. He was well-liked, a bit of a late developer, but passed his A levels and went on to Cambridge University.

He even went on to be House Captain by the time he left, and he possessed a sense of adventure, often hitch-hiking three hours to London overnight to watch Chris Farlowe and The Thunderbirds, Steve Winwood or The Moody Blues at The Marquee or The Flamingo in Wardour St, returning back in time for chapel.

He’d even write a song one day, called “Three Hours” about doing just that.

On his last day at school, as was customary for students who were leaving, he got spectacularly drunk and was found with a bottle of sweet white wine in hand, just outside the music block.

He was, it appeared, quite the lad.

And the name of this popular, outgoing, Chris De Burgh-baiting lad-athlete?

It’s odd that a man who was famously shy and uncomfortable onstage later in life began his days so full of confidence.

The story of Nick Drake is ultimately a sad and strange one. Although he signed to Island Records, writing and recording three incredible, beautiful albums, those records did not sell well in his lifetime. He became despondent. He withdrew from his friends and struggled with depression, a state of affairs that ended in November 1974, when his parents found him dead at their home, his having overdosed on antidepressants.

The music he left behind was rediscovered and reappraised over the next few decades to the extent his albums now regularly appear on “Best Album Ever” lists. In the U.K. interest in Drake was further boosted from a most unlikely source, when “Fruit Tree” was played over a scene in popular 1990’s Sunday night TV schmaltz-fest police drama “Heartbeat”. In the episode, Nick Berry’s character, a village policeman, lost his wife to Leukaemia in front a quarter of the TV watching nation, many of whom were either blubbing uncontrollably or wishing Shazam had been invented so they could find out what the record was that was playing over the scene.

As Drake’s reputation and the public’s love of his music has risen, so has the price of the earliest copies of his albums. First pressings of Drake’s LPs now regularly fetch £400-£500 for Five Leaves Left and upwards of £200-£300 for Bryter Later and Pink Moon.

Because the original tapes of Five Years Left are damaged. If you want to hear the best possible version of Drake’s first album, vinyl really is the closest you can get.

Which is bad news for vinyl-loving fans of Drake’s superb brand of folk rock.

First, there’s only three (ish) albums, right? Perfect for completists short of time. And yes, you’d be forgiven for thinking at those prices, perhaps that’s just as well.

But happily, decent copies of Drake’s albums can be found for much less than the bankruptcy-and-divorce-threatening territories that a first edition will engender.

For the vinyl geeks, here’s a guide to your choices if you want to build a Nick Drake Vinyl Collection (Warning: it’s going to get geeky from here):

Choice 1: A First Edition. (Also known as the “Millionaire’s Choice”.) 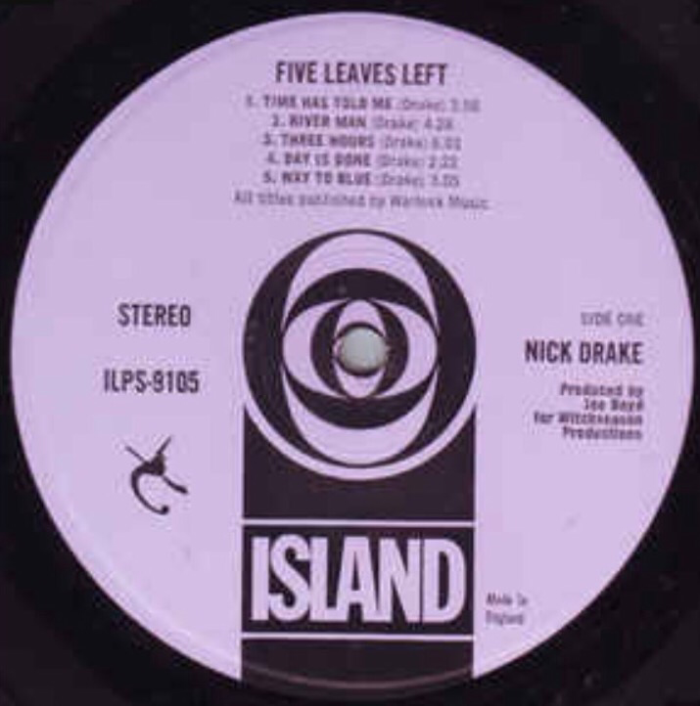 Pros: lovely solid label on FLL (see above), pink Island rim labels on BL and PM. Heavy vinyl. True scarcity especially in great condition (only circa 5,000 of each sold). Absolute clarity of sound, straight off the freshest stampers. Widely considered the best by those fortunate to have heard them, especially in the upper echelons of the audiophile world (i.e. people who post comments on the Steve Hoffman forum on the internet).

Cons: Divorce, bankruptcy, awkward conversations with bank managers. Constant vexation that children might play the thing on their Crosley turntables.

Pros: Excellent value – you can get all three for £46. Pink Moon is currently only £10.99 on Amazon (although I’m sure you’d go to your local record shop first). The “right” versions sound great. The best value for money.

Cons: Choose your version wisely. There are counterfeits out there which don’t sound so good. Other reissues (such as those by “Simply Vinyl”) are taken from digital sources and to some don’t do the album justice. The best sounding versions by all accounts are the 2012 Back To Black reissues.*

In 1986 a USA Box Set called Fruit Tree: The Complete Recorded Works was released housing all three albums, plus a further album of songs recorded by Nick Drake but not released in his lifetime.

Pros: Released on the US Hannibal label, these are excellent pressings from the original tapes. You also get an extra LP.

Cons: avoid the 1979 UK version – it squeezes the tracks onto 3 discs. Neither version comes with proper LP sleeves.

Choice 4: The Next Best Thing To A First Pressing Without Incurring The Threat Of Bankruptcy: The 1976 Island Blue and Yellow label re-releases. 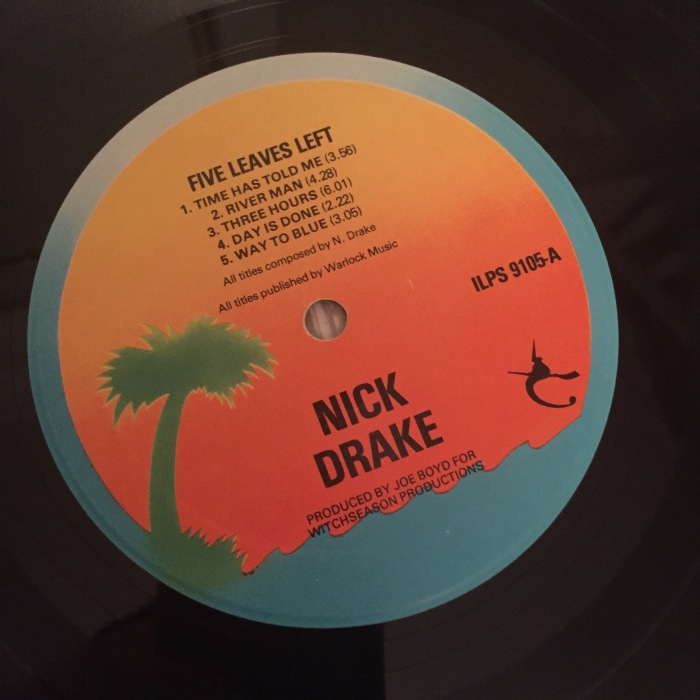 Pros: They can be found for a little over £30 each. More expensive than a new copy, but is definitely an all analogue pressing from the original source, and might have investment potential as first pressings become more difficult to find in tip top quality. Some of these second / third pressings of the albums still used the original stampers and so are as close as you can get to hearing a first pressing. The only difference for some is vinyl quality and thickness in post oil-crisis seventies Britain was not quite as good as it had been in the sixties and early seventies.

Cons: More expensive than a new copy, but perhaps the best option for those who balk at spending £400 on an album (i.e. Most of us).