With 1980’s Album of the Month Clubs such as Columbia House (USA) and The Britannia Music Club (UK) having gone the way of the Commodore 64, typewriter ribbons and Roland Rat you’d be forgiven for raising an eyebrow or three at the idea of a record subscription service revival.

However, no matter how many eyebrows you might raise, there are still plenty of people out there who are looking to resurrect the idea.

At first glance this all seems rather strange. Album of the month clubs were a way to build an album collection quickly, hopefully cheaply and easily, with punters often taking “recommendations” from the club itself based on nothing more than ticking either “pop”, “rock” or “classical” on a preference form.

With YouTube and Spotify using algorithms based on your listening habits, “discovering music” through a generalist, remote, non-personalised service seems all a bit, well, 1985. You might as well ask Roland Rat to recommend his favourite albums to you.

Furthermore, no physical product can be as cheap as digital streaming, so there are no “Buy Four Albums for £1” style offers. Without price as a weapon, what angle can a budding music-loving entrepreneur use to encourage people to take up a new subscription?

It’s worth looking at a few of these clubs to see how some have, in different ways, found a model to be relevant in the 21st Century.

To differentiate themselves in what might otherwise be a crowded marketplace, vinyl subscription services should have answers to the following questions:

Vinyl Me Please produces exclusive editions, often in coloured vinyl. This is a big tick in the box. There’s nothing quite like a potentially scarce record to catch the Magpie-like reflexes of the record collecting community. One recent album of the month was an exclusive reissue in grey vinyl of The National’s “Boxer”. To accompany the album was an exclusive 7″ single of two songs from the new album. As those old adverts used to say “This Is Not Available In The Shops!”

So far so brilliant.

The next month I was confronted with a dilemma. On offer was Notorious B.I.G.’s classic Ready To Die.

The issue I had with “Ready to Die” was the tracks “Me and My Bitch” and “#!*@ Me (interlude)”, the latter essentially a recording of Mr B.I.G. sh*gging his girlfriend whilst she describes him as a “fried-chicken-eating-gangster-mutha#!*@er“. I quickly realised if I was playing the track when my two young children popped into the room, I would feel relatively uncomfortable. My kids, on the other hand, would find it possibly hilarious, yet puzzling.

These are colourful phrases, and show a certain flair and imaginative use of the English language. I just think there are better ways to help kids with their English homework than teaching them phrases such as “Crack smoking, Oreo cookie eating, pickle juice drinking, fat greasy mutha”

At least let’s wait until they’re in their teens, eh?

So how does Vinyl Me Please cater for those of us who have got over our rebellious and misogynistic phase in life? 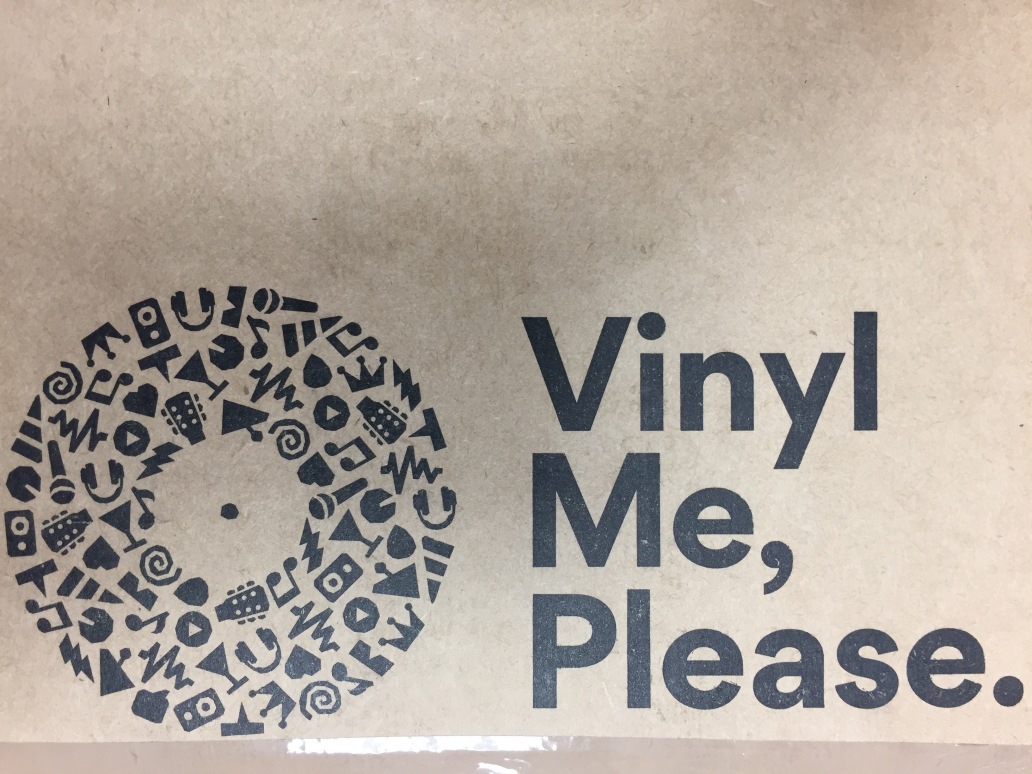 There’s no “cancellation” facility for long term subscribers (although there is a more expensive “Month-by-Month” option), but luckily, there is a “Swap” facility where VmP has a back catalogue of exclusive vinyl that subscribers may exchange for the album of the month.

As for the “club” aspect of Vinyl Me Please, this is fostered through a series of emails and forums. There’s a newsletter called “The Standard”, which is infinitely more interesting for music lovers than London’s free newspaper of the same name. There’s also a podcast and a Spotify playlist called “On Rotation”.

As for value for money, that’s rather in the eye of the beholder, but a three month package costs $36 per month to the UK (it’s less in the US), which is around £27 per month.

But, I hear you ask, what about that final piece in the jigsaw? The ludicrous cross-sell?

Vinyl Me Please like to bundle in a couple of extras to their monthly album. There’s an art print, designed to appeal to that small niche of The National Fans Who Like Limited Edition Vinyl and Art Prints.

And then there’s the cocktail recipe…

It’s a mystery to me why someone has decided the biggest problem with listening to records – the one grumble they believe unites people who listen to music on vinyl – is a lack of decent cocktail recipes.

I know a few record collectors and have never bumped into any of them in a cocktail bar. In the nicest possible way, it’s not their normal habitat. It would be like finding a parrot in the North Pole, or Mariah Carey at a book club. Never mind cocktail bars, half the record collectors I bump into at record fairs would find themselves placed firmly outside the velvet rope of a Yates’ Wine Lodge, what with their faint odour of charity shop dust, thermos flask boot-sale coffee and quiet despair. They’d probably start haggling with the bartender. “What’s your best price if I buy two?” “Oh come on mate, that Gin Martini has seen better days, eh?” “Can I pay you next time?”

I’m not saying this is a good thing or a bad thing, but it’s definitely a thing.

So is Vinyl Me Please treating record collectors as a Pygmalionesque experiment, playing the role of Henry Higgins to the scruffy, unsophisticated Eliza Dolittles of the record collecting community worldwide? Is it dragging us record collecting plebs into the Hallowed Halls of Hipsterism where everyone drinks cocktails, craft beer and listens to coloured vinyl?

And has had a wash…

And, more to the point, does anyone actually put a record on and mix themselves half a pint of the finest premium rocket fuel in order to get the full experience? Does that experience make listening to records so much better?

Well, there was only one way to find out….

I don’t know if you have ever tried to make a cocktail yourself. It’s generally more trouble than it’s worth.

By the time you have completed these various tasks still with no end in sight you are quite in need of a drink, and, what with the potential cost of all the various ingredients, a possible remortgage.

I once tried to do things properly and went to a cocktail-making class.

I stood in front of a huge multi-gallon basin of fresh ice and knocked a glass over, which promptly shattered all over the ice. Due to the difficulty in distinguishing ice from broken glass, and the potential damage broken glass might do to the throats of martini lovers everywhere, the bar owner had to immediately chuck away gallons of ice, which he did with a slightly hurt look on his face.

I called it a day there and then.

So now, I did what any self-respecting music blogger-about-town would do, and popped into the cocktail bar at Hawksmoor, chatted to the nice people behind the bar, and asked them to make me the Vinyl Me Please Cocktail of the Month (below).

They told me “The National + 29 Years” (not the snappiest name for a cocktail. Ian Fleming would have cut that out of his first draft, I suspect) was like a negroni but made with mescal.

Which, if you are into cocktails, might mean something to you.

It was very nice. The sweetness of the Aperol gave way to smoky mescal (hey, I don’t write album reviews, but I can review a cocktail) and the enthusiastic bar staff then suggested we make another with Campari (not so sweet) instead of Aperol to see which one tasted best. They were both beautifully made and smelled delicious, enhanced no doubt by the forty stirs around the single ice cube mandated by the recipe, not to mention the expressed orange swath.

Actually I couldn’t find an expressed orange swath, so I just got them to twist some orange peel over the drink.

See what I did there?

I left Hawksmoor significantly more cheerful (not to mention wobbly-legged) than I had arrived, but unsure as to whether listening to The National’s dark, asymmetrical passageways and late-night, empty-city-street mood, and slightly menacing but mostly isolated vibe (description copyright: Pitchfork Magazine’s review of “Boxer”) would have enhanced the experience…