Home › Indie › Tim Burgess of The Charlatans Telling Stories: “I Wanted My Book To Be Like Pulp Fiction…”

Tim Burgess of The Charlatans Telling Stories: “I Wanted My Book To Be Like Pulp Fiction…”

Burgess: “I enjoyed Dylan’s Chronicles…but I wanted my book to be more like Pulp Fiction…”

Reading extracts from his book, Burgess revealed snippets of life on the road with a rock band, which as most of us have long suspected appears to involve long and convoluted attempts to smuggle banned substances across borders on a tour bus, with “many a nook and cranny” for such things. On one occasion, such was the frenzy of micro-engineering and logistics in hiding The Charlatans’ drug paraphernalia inside a stereo system, that the band didn’t realise they had passed the border seventeen miles previously. On the Channel Tunnel.

The reading Burgess gave coupled with a swift flick through the book reveals that Burgess indeed has great stories to tell, and is a good (and funny) writer to boot. 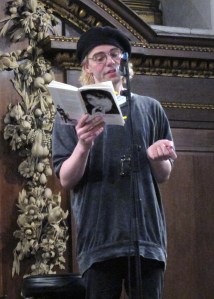 “…and lo, we doth took cocaine in unmentionable places..”

Following the reading Burgess was joined onstage by journalist Ben Marshall for a talk about some of the books highlights, including the story that I suspect the book will become known for: namely an incident where the band blow cocaine up each other’s er, behinds. As Marshall asked, at what point do you get so jaded with drug use that you revert to that!?

I asked Burgess whether he had read any other rock biographies and how did he think his book might compare to them?

He told me: “I’ve only read Chronicles by Bob Dylan and I really enjoyed it. I don’t know how mine compares – I wanted mine to be a bit more like Pulp Fiction! And Stand By Me…” 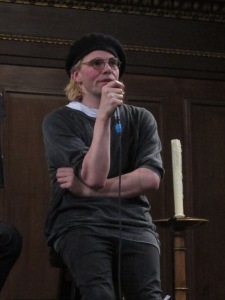 Q. Writing lyrics or writing the book? What was more poignant for you?

“Writing books you have to be more factual whereas writing lyrics you can be a bit more dreamy. I find writing lyrics easier than writing a book. I suppose I would though because I’ve been doing it for a long time: it’s completely out of my comfort zone writing a book but I like that as well.”

Q. Regarding the recent Guardian story suggesting Rob Collins possibly leaving the band (Collins died in a car crash in 1996): were there more good times with him or bad times?

A. With Rob? It was all good times, really. I don’t think he was really going to leave the band. I just think there was a moment where it had to be addressed whether he was going to be in the band or not because even though he was the star player it was his destructive nature that was coming to the front.

Q. What was the best album you think you wrote?

Q. Is there a difference to the performance you give when you are high on drugs compared with now?

A. I remember words a lot more…and sing in tune:  which is not always the most important thing about the performance – a performance can be made of lots of things, but I don’t know whether one is better than the other…there were great times (when high)…

Q. Being part of the Manchester scene in the nineties, and having Bez and Shaun Ryder doing reality TV: What do you make of that?

A. Just before Alan McGee stopped managing the Charlatans he said I should go on Celebrity Big Brother and that was his parting shot to me, and I said “No ****ing way!”.

Q. Can you ever imagine splitting The Charlatans up?

A. I can’t – no. I think the band are happy – I mean I don’t know how they are on a day to day level but generally they’re fine…

Q. How’s the health now of John Brookes (Brookes was diagnosed with a brain tumour in 2010)?

A. Really good now – I was in a rehearsal room with him yesterday and he seemed good, drumming away…

Q. You’ve got a nice back catalogue: Is there one favourite song you have, and one you just churn out for the fans?

A. I really like Senses because it’s really huge, sprawling…epic. I really like a song called Bird for the opposite reason – it’s the shortest song we ever wrote – probably the sweetest as well. Oh, and Telling Stories – the track. Bored? It’s never been like that. We did stop playing The Only One I Know because it felt like a karaoke version of ourselves. And then we brought it back and it sounded better – probably a wise move to give it a rest.

Finally, Burgess sang acoustic versions of Charlatans classics The Only One I Know and Impossible followed by two new songs. A great night!

I first heard The Charlatans on holiday in Kavos (classy, I know), on the Island of Corfu in 1990. It was late in the season, and I wasn’t much of a clubber, being more of a Guns n Roses fan, but the mouse-ridden hotel room was cheap, the sun was hot and the holidays reps only slightly irritating.

“The Only One I Know” was one of those songs the clubs played all night long. It was rocky enough for rock fans (that wah-wah guitar riff was crucial) and the beats and organ riff appealed to the clubbers – the perfect cross-over hit. Madchester had arrived…

Record #37: The Charlatans – The Only One I Know

My Top 50 Greatest Music Books Ever