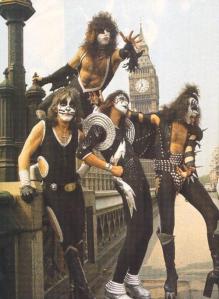 A laughable collection of has-beens that no-one takes seriously any more. But that’s enough about Parliament – here’s the Hottest Band in the World – KISS!

After the Kiss Animalized Uncensored Live video, I was keen to see more. This led me to the new video release Kiss – Exposed!.

This was packed with archive footage of the band, and set (apparently) at the band’s home. Yes, it appeared that like a comic book Morecambe and Wise, Kiss all lived together like one happy family.

Even the doorbell rang to the tune of Rock and Roll All Nite and the house was floor-to-ceiling carpeted with glamourous looking women. I didn’t realise it at the time but the band had hired the Playboy mansion for this bit.

The loose plot consisted of a nerdy reporter wanting to interview the band. This found him finding Paul Stanley in bed with six women all named Carol ( “I went caroling last night” said Paul apologetically delivering perhaps the world’s weakest punch line), and asking whether the video for “I Want it Loud” was “a bit fascist” to which Gene Simmons dead panned “it’s not facist, it’s one of the slowest things we’ve ever done…” This, it turned out, was the world’s second weakest punch line.

Better than the jokes was the archive footage of the band from the seventies: Simmons breathing fire resplendent in full “God of Thunder” make up and looking leaner than fillet steak. Ace Frehley’s guitar solo which resulted in the guitar turning into a rocket and flying up and offstage. Peter Criss singing “Beth” appallingly but with much charm and throwing flowers into the audience. Paul Stanley still prancing around like a hairier (but thinner) Spanish pony. Looking at this footage it was clear why, along with some great tunes, Kiss were special.

The final VHS I heard about was a Kiss feature film called The Phantom of the Park. Upon release, the VHS was advertised in Shades Records at the extraordinary price of £74.99. I eventually hired it from a video shop for £3 and found a fascinating yet extraordinarily bad feature film with acting that would be an insult to chairs to call wooden. I felt robbed spending £3, never mind £75…

Double live albums Kiss Alive and Alive II were huge commercial successes in the ’70s and both show the band at their best. The first also rather wonderfully features Stanley’s vodka and orange juice rap: it had clearly been going over well with the crowd for over a decade!

It’s easy to knock Kiss. Critics might point to the odd mediocre record (inevitable when you’ve been around for nearly 40 years), relentless fleecing of their fan base with licensed merchandise and plagiarism from originators like Alice Cooper, Bowie, New York Dolls etc.

When Kiss produced their own Kiss comic and added a little of their blood into the printing ink, Alice Cooper was asked if he would like to do the same. He wryly replied “Sure: I’d like to use all of Kiss’s blood in a comic book!”

However, like any band that has had ups and downs, none of that matters when I hear the car crash and opening chords of Detroit Rock City, or Deuce, or Black Diamond, or Cold Gin, or Love Gun, or Christine Sixteen, or Rocket Ride, or Strutter, or Shout it Out Loud, or, or…

Like Loading...
‹ Kiss…..And Things You Don’t See Anymore #3: Denim Jackets With Band Names on the Back
Every Record – The 50th Episode – And Best Bits So Far (and A Versatile Blogger Award) ›