I have very few regrets in life….

Perhaps I should have danced with that pretty brunette at the school disco when I was ten years old instead of looking horrified. On reflection I didn’t take enough care when using that scalpel when twelve, resulting in an unscheduled trip to A&E.  As a teenager that haircut was pretty bad, and I was probably slow to discover that the use of sarcasm wasn’t always a winning strategy to get people on your side.

Perhaps my biggest regret however was knowing about the three dates that Guns n Roses played in June 1987 at The Marquee Club in London’s Wardour Street and deciding that I wouldn’t go. For my generation, that’s like passing up the chance to see The Beatles at The Cavern Club. Three times.

It gets worse. I even had a money off voucher. Metal Hammer magazine had one that gave a pound off seeing either Tesla or Guns n Roses at The Marquee.

Like a foolhardy quiz show contestant deciding that the capital of Spain is b) Barcelona, I went to see Tesla.

Now: Tesla were great. And they were even better when they supported Def Leppard a few months later and I had a front row ticket. But Guns n Roses, in hindsight, were better. To use another Beatles analogy, I feel like Dick Rowe: the man at Decca who passed on The Beatles, saying “guitar bands are on their way out”. Damn.

Thank goodness for the front row ticket I got to see Guns n Roses support Aerosmith at Hammersmith Odeon just a few months later. Amazing seats. Great gig. Or so it would have been had it not been cancelled. Double Damn. That was the best gig I never went to. Read that again. Front Row. Hammersmith. Guns n Roses and Aerosmith. 1987.

To be fair, the Marquee gigs were prior to the release of Appetite For Destruction. I had heard Night Train on the Friday Rock Show and liked it, but I also liked Aerosmith’s new songs from Permanent Vacation. In 1987 (is that really 25 years ago?!) I was a huge Aerosmith fan, and GnR‘s sound was heavily influenced by those ’70s Aerosmith albums like Rocks, which were still relatively unknown in the UK. To me, GnR were the newest and best of a large number of similar American bands like Mötley Crüe, Ratt, Poison and Faster Pussycat. And as good as Appetite was, Aerosmith were resurgent and seemed to be “the real thing”…

In hindsight of course, Aerosmith’s ’80s and ’90s output was a pale shadow of their ’70s albums – and GnR’s Appetite… was streets ahead of even Permanent Vacation – released at around the same time.

In a wait almost as long as one of Axl’s stage appearances, it still took a year for Appetite For Destruction’s popularity to reach beyond the Kerrang! reading cognoscenti. By then, Sweet Child of Mine was a global hit and they were a lowly fifth on the bill at 1988’s Monsters of Rock at Castle Donington – and I wasn’t going to miss the chance to see them again…

(I’ll come to that show another time).

Axl Rose and Guns n Roses at The Hammersmith Apollo June 2006:
Taken on my Nokia 6230i: Hi tech stuff…

Fast forward nineteen years to June 2006. A Donington warm up show. Chinese Democracy has yet to be heard (officially anyway) and the wait has lasted longer than the entire career of The Beatles. I am at at the front of the Hammersmith Apollo crowd. It is 10.45pm. I have already sent a text to a friend living in London to get his spare room ready: I have no chance of catching my last train. Axl – the only original member of that line up still standing – was due on stage two hours ago. He’s almost as late in arriving as his countrymen were in the Second World War. The crowd are booing. So am I.

The show is a triumph. It was genuinely brilliant. Two thirds of Appetite… is played. Sebastian Bach of Skid Row joins Axl during the show. Bumblefoot’s guitar turns into a butterfly (or something)…

You could write a book about the odd things that have gone on around Guns n Roses. Indeed Slash wrote a very entertaining one. But there’s a reason why some bands reach legendary status. It’s because of their songs. And because they can still deliver a performance. Even if it’s two hours late… 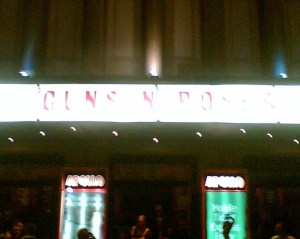 The sign outside Hammersmith Apollo that night. More quality photography from the Every Record studios…

Guns n Roses start their UK tour tonight – they’ll be onstage in Nottingham in about four hours. After midnight. Probably.

Like Loading...
‹ Every Record – The 50th Episode – And Best Bits So Far (and A Versatile Blogger Award)
UK wins Eurovision….because no other country has ever got close… ›