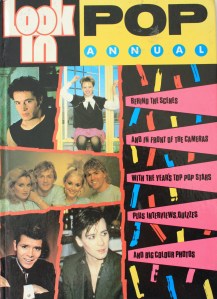 1982 was a big year in pop music. Madonna’s debut. The release of Michael Jackson’s Thriller. Ozzy munched a bat. But what was it really like?

In the UK the biggest selling single was Dexy’s Midnight Runners‘ Come On Eileen. The Human League had a huge hit with Don’t You Want Me. I particularly liked J. Geils Band’s Centerfold, Survivor’s Eye of The Tiger and a big hit at school was Musical Youth’s Pass The Dutchie. This was also the year Culture Club’s Boy George first appeared on Top of The Pops with Do You Really Want To Hurt Me prompting a hundred discussions about whether he was a girl or a boy…

Browsing through one of Leigh on Sea’s used bookstores a few weeks ago I stumbled across a rare piece of blogging treasure: The 1982 Look-in Pop Annual. Edited by none other than Neil Tennant (before he joined The Pet Shop Boys) the book is a fascinating (and frequently amusing) time-capsule of the early eighties pop scene. Let’s have a look: 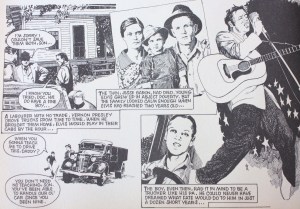 Perhaps the single greatest thing here is the “Pop Picture Strip” of the life of Elvis Presley, just five years after his death. Whilst not really rivalling Peter Guralnik’s Last Train to Memphis for breadth of content it does beat it for sheer brevity and number of pictures – telling the story of the rise of Elvis in just eight pages. Brilliantly, the author manages to project the story onto an educational backdrop of the war in Korea and The Suez Crisis, an approach that recent issues of modern equivalent Top of the Pops Magazine have, I feel, neglected (sample recent TOTP Magazine headline: Rita Ora Exclusive – “I can just about make scrambled eggs”. I’m not joking).

The somewhat highbrow tone continues with an article on Electro Pop. “For many months now” states the article (months!) “the pop charts have been buzzing with synthesisers and thumping to computerised drums. Is this some kind of electronic revolution?”

It’s a serious piece, telling of the rise of the Moog in 1964, how The Monkees were pioneers in 1967, followed by Roxy Music and Kraftwerk. (Contrast with this recent Top of The Pops Magazine headline: “The Wanted – Number Twos and Blocked Loos: Eeeew!”).

More amusing are quotes from Gary Numan: “To be honest, I’m not that good a player at all” (insert your own joke here) and Depeche Mode’s Dave Gahan: “I don’t think people who come to see us now think of us as a synthesiser band” (Sorry Dave: I’ll be honest – I still do). Even better is the comment that “Depeche Mode has allowed Synthesiser music to lose its doom and gloom tag” (Really? I have seen recently bereaved Norwegian Death Metal bands with happier songs and faces than Depeche Mode). Of course in 1982 Depeche Mode had just released Just Can’t Get Enough and the rather chirpier Vince Clarke had only recently departed…

Following my posts on old rock stars’ jobs it is sobering to see that I wasn’t the first to write an article on the subject: Look-in had beaten me to it by thirty years. In addition, they also had some great quotes. Who knew Paul Weller wanted to be a private detective?! Or that Suggs used to be a decorator? Or that Nick Heyward wanted to drive a tractor (give it time, Nick – you will one day). 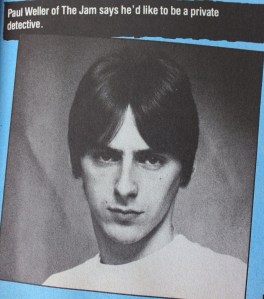 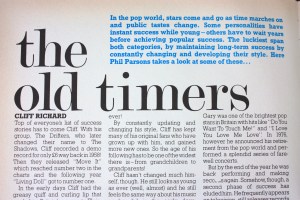 The Old-timers piece also explained that Elton John’s career highlight so far was a duet with Miss Piggy:

Adam Ant meanwhile paid tribute to Paul McCartney calling him the “best bass player in the world” which is possibly damning McCartney with faint praise and slightly ignores the whole “best songwriter” title but we’ll let it go. “I had the first three solo McCartney albums and learned every single bass line off them” Ant trumpeted.

Pop on TV is given a retrospective with the Old Grey Whistle Test coming in for some severe stick from Neil Tennant’s viperish quill as he describes it as “Greyer than ever” and “it was pretty boring in 1971 and that hasn’t changed much either!”. Miaaoooww… 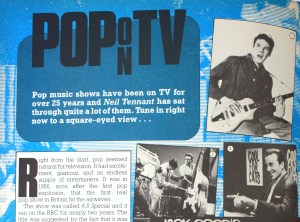 Next up are 1982 rock star’s homes. Adam Ant (who later gets six pages to himself – a sign of star status) is described as living in a two room flat near Regents Park decorated by two designers from The Royal College of Art with “blue satin chairs and silvery green walls with matching velvet curtains”. Yum. Elton John lives in a country mansion which according to the article was built by King Henry VIII (by hand presumably) that he paid £380,000 for (bargain!) It stands in 37 acres and has six bedrooms and its own cinema.

Meanwhile Eddie Tudorpole lives in a squat, the three members of Bananarama share a council flat in Holborn and Buster Bloodvessel of Bad Manners lives in Stoke Newington. With his mum.

And what about an in-depth look at the industry and how a record becomes a hit? We follow Altered Images attempts to climb the charts with “See Those Eyes”. Singer and part time Gregory’s Girl Claire Grogan reveals she gets her lyrical inspiration from AA Milne’s Now We Are Six. Hmmm. I wonder why they never won an Ivor Novello award…. When “See Those Eyes” just misses out on the top ten, bass player Tony McDaid is quoted as saying “It got the most critical acclaim we’ve had but who wants that? We’d rather it sold more!” Good to see artistic integrity was alive and kicking…

Finally there’s a Look-in Pop Panel where ten lucky readers get to ask Gary Numan and Cheryl Baker from Bucks Fizz what it is like to be a pop star. Gary reveals he likes a new band called Huang Chung (probably Wang Chung?) and that his nickname at school was Wally. Which shows that perhaps not every article was entirely highbrow….

Perhaps the best way to look at 1982, however is through that year’s chart sensations: Haircut 100. I’ll show you a picture – because every picture tells a story, don’t it? 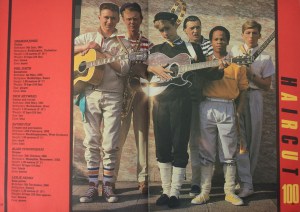 Like Loading...
‹ Is This The Hard Rock Cafe’s Greatest Treasure?
﻿Ray Davies is Something Else – Live at Southend on Sea ›