Rock On! Magazine featured some of the UK’s most exciting journalism and analysis. A good example of this is the story the 1980 Annual carried of Rick Parfitt‘s Jeans.

An entire page and a half is devoted to Rick Parfitt’s favourite choice of leg hiders. Oh yes – this is top drawer stuff. Difficult to understand how this article hasn’t appeared in more rock interview anthologies alongside Lennon’s interview with Jann Wenner when he left The Beatles. “I’ve got around eight pairs” reveals Parfitt, sending shock waves across the world. “One for gigs and the other seven for knocking around in.”

This is not all however. (Brace yourself – this is earth-shattering stuff) “Virtually all my jeans are second hand. Wherever we go we generally get offered jeans.” At this point I wondered if the word “jeans” was being used as a proxy for the word “cocaine”.

But what, I hear you breathlessly ask, would happen if they don’t fit? Don’t fret – Rick reveals the answer. “I take them round to my Aunty’s. She knows exactly how I like them and does them up a treat for me.”

On the back of this article I believe Rock On! was granted entry into the Smithsonian Institution.

Moving on, Britain was still class obsessed in 1979. So You Wanna Be A Rock N Roll Star gives advice to budding rock stars and looks at the background of existing stars. “Working class or middle to upper class; it seems to make little difference” noting that Genesis and Chris Squire of Yes were public schoolboys whereas “Bryan Ferry is the son of a miner, Jim Morrison was the son of a US Navy Rear Admiral, Alice Cooper‘s father was a preacher and Iggy Pop‘s parents are teachers”. Wannabes are encouraged to get a job, “boring as it may be” with the wonderful role model Keith Moon being cited as having had an inspiring “23 different jobs before he was 17!” 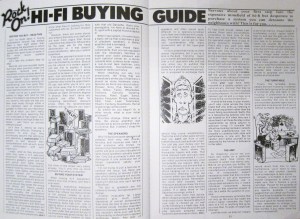 The HiFi buyers guide is good. Having the right HiFi was worthy of a two page article but perhaps Rowan Atkinson, Mel Smith and Griff Rhys Jones from Not The Nine O Clock News best summed up the trepidation people felt about buying a stereo in the seventies.

“Apparently” says the article, “some people are now investing in a stereo cassette deck in preference to the trusty turntable” which is described as a “false economy” not inaccurately, as history will show us, notwithstanding that UK cassette sales trebled in 2012 (mainly due to one band releasing a cassette single). The minimum outlay for a bona fide HiFi in 1978? £250, “if you don’t want to throw away good money”.

A review of 1978 highlights the successes of buzz bands The Boomtown Rats, The Stranglers, The Clash and The Buzzcocks, with The Jam “getting some long overdue success”. Whereas The Sex Pistols now enjoy legendary status, in 1978 they appeared to be as fashionable as one of Arthur Scargill‘s older suits. The punk heroes of ’78 had to be Sham 69, notable for having “none of the pretentious aggro”. It is fair to say Sham 69 are now the Andrew Ridgely to The Sex Pistols’ George Michael. Ian Dury is forecast to have a bright future however, and is set to break the USA. “You heard it here first” trumpets Rock On!

Just to show how much the world has changed there had been a huge rock comeback in ’78. Yes – David Bowie (described as one of the rock world’s “Dinosaurs”) had a “predictably triumphant return” playing Earl’s Court. Not only that, but Bob Dylan played his first UK shows for nine years.

Cozy. Very secure about his manhoood.

Perhaps the best is saved until last with a feature on Star’s Cars. Thrill to the sight of Cozy Powell’s Ferrari GT4 (Whoooo!) Steve Jones’ BMW (Woooaahh!) and Midge Ure‘s Vauxhall (eh?) “made before they invented strikes”… 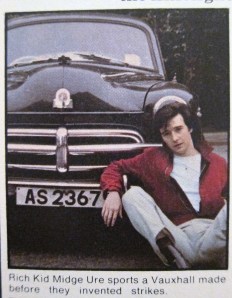 Midge. Very secure about his manhood.

Like Loading...
‹ Rock On! Annual 1980. Definitely Not Sexist. Even If You’re A Bird.
David Lee Roth’s Just Like Paradise is 25 Years Old Today. How Old Does That Make You Feel? ›

I found these beauties languishing in two different record shops today, and just felt sorry for them, all alone like that. I felt had to give them a good home #gooddeedfortheday
My local record shop has these two first press originals in beautiful condition. Guess how much...
I’ll tell you what, Uptown Records in Spalding, Lincs (in new premises since last year) is the most incredibly well stocked shop. Just an extraordinary, friendly, tip top record shop.
One of Lincolnshire’s best kept secrets, Spalding’s Uptown Vinyl Records. An absolute treasure trove...
Behold! My gurning face, surrounded by the lovely hosts of Podrophenia on Ship Full of Bombs, Ian Pile, Dave Collins plus producer Ian Pope. Great fun doing the show, which is now on Podbean
I caught this T-shirt from a canon fired by either Geddy, Alex or Neil on Rush’s S&L tour. I’ll be wearing it in honour of Neil Peart tomorrow. Heavy rock may just have lost its GOAT.