Home › Rock Music › Pink Floyd, Dark Side Of The Moon and The Wizard of Oz

Pink Floyd, Dark Side Of The Moon and The Wizard of Oz 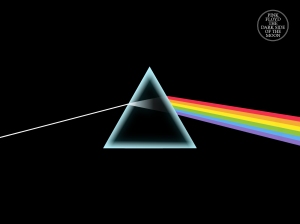 The concept for ‘Dark Side of the Moon’ centred around the big sources of stress that people face in their lives. Travel, Money, Madness, Mortality, getting the lids off jam jars when you have wet hands, the price of Ticketmaster booking fees. Not all these ideas made it through to the final album.

It was Roger Waters‘ first album as sole lyricist, but he only sang on the last two songs, with Gilmour taking on most of the lead vocals. Rick Wright stepped up on songwriting duties, with ‘The Great Gig In The Sky‘ and ‘Us And Them‘.

The iconic cover was just one of several ideas Storm Thorgerson had – with a rejected photographic treatment of Marvel Comics’ Silver Surfer at a beach perhaps being one of Rock’s Great Lost Ideas.

I’ll let other people comment on the social impact of this fine record. The more compelling question we can ask is “Should I really watch The Wizard of Oz and play ‘Dark Side of the Moon’ at the same time?”

Although history is quiet on where this idea first took hold, the concept that some of the words and pictures kind of went together when playing Dark Side of the Moon and watching The Wizard of Oz was first discussed on-line in 1994. There were certainly many instances of a kind of synchronicity. It was almost as if The Dark Side of the Moon had been deliberately composed with The Wizard of Oz in mind….Spooky.

So let’s have a look at this rather strange phenomenon. Even the instructions are the subject of some debate: Do you start the album at the first roar of the MGM lion, or the last? Dark Side of The Rainbow-ists (for there are such beings – I think most of them like Lord of the Rings and Star-Trek too) disagree. If in doubt, turn on the DVD and press pause at the second MGM lion roar. Then drop the needle on your copy of Dark Side of The Moon, and release the DVD pause button as it begins… 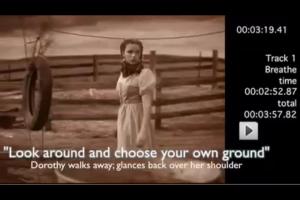 “Look Around” say the lyrics to Breathe:
So what does Dorothy do at that very moment?

As Breathe begins, there are a few notable coincidences. Gasp in amazement as Dorothy looks around at exactly the same moment that Gilmour sings the words “Look around and choose your own ground“. 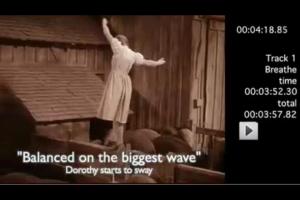 …”Balanced on the biggest wave” comes in whilst Dorothy balances on the pig sty – and as the song continues with …”towards an early grave” she falls in…technically that’s not a grave she’s fallen into of course, it’s a pig sty – unless you consider those pigs are being fattened up for the table… 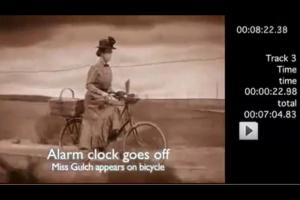 The chiming of bells (bicycle bells?) ring through as Miss Gultch arrives by bicycle. They stop as soon as she dismounts. Weird. Surely the band were watching the film and getting all this to match up? 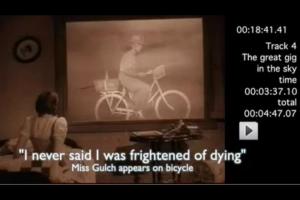 The Great Gig in the Sky not only lasts the exact time that the house is in the air, but some of the talk-over bits link nicely….

Dorothy runs away to Professor Marvell during Time, and he talks her into going back home as “Home, home again” in Time is sung.

Then Toto jumps through Dorothy’s window just as Gilmour sings “Waiting for something to show you the way“… it really is extraordinary. Sort of. I mean, Gilmour didn’t sing “Dorothy’s dog jumps through a window” which might have settled the debate once and for all, but even still that’s pretty strange right?

The Great Gig In The Sky then amazingly coincides with the Tornado scene – and the song and tornado end in perfect synchronicity. 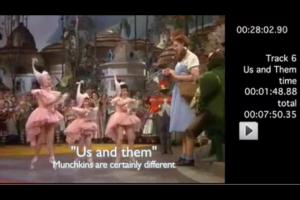 The Munchkins “dance” to Us and Them…

Not yet convinced? The Muchkins dance beautifully…(and sort of in time)… 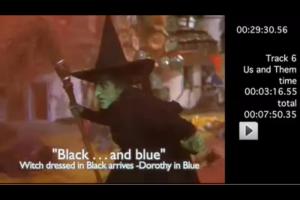 Black and Blue / and Who knows which is (witch) and who is who…?

…and as Us and Them continues with “Black ….(witch appears)…and Blue (colour of Dorothy’s dress)..and who knows which (witch?) is which and who is who…”

As Brain Damage kicks in we have the Scarecrow scene singing “If I only had a Brain“. C’mon – that’s a big coincidence…although not having a brain is different to having brain damage, as anyone who has noticed the difference between Wayne Rooney (no brain) and Top Gear’s Richard Hammond (had brain injury) will attest… 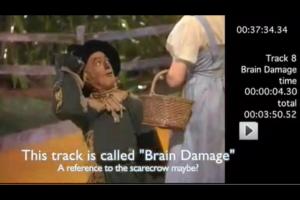 I guess I should lay my cards on the table. I don’t believe for one minute that Roger Waters had The Wizard of Oz in mind when he wrote the lyrics to Dark Side of the Moon. The biggest elephant in the room being the many moments where the words do not match the visuals in any way shape or form. But it’s still fun to spot all the times that they do match. And I dare say if your senses are heightened by (ahem) some external stimulus, I can well imagine this would be a mind blowing experience. It is less so watching the thing on YouTube stone cold sober, although DSotM is perhaps the weaker for not having either Somewhere Over The Rainbow or If I Only Had A Brain tucked away somewhere on side 2…

For those who don’t have a copy of either Dark Side of the Moon or The Wizard of Oz, then happily there are these helpful YouTubers who have had a go at replicating the experience. Not as atmospheric peering at your tablet or computer screen as it is lowering the lights in your room whilst listening to a deep, boomingly loud stereo system and a fifty inch TV set, but each to their own.

Here’s a clip with some commentary – which is where the screen shots have been taken from.

Tags: Dark Side of the Moon, Dark Side of The Rainbow, Dave Gilmour, Great Gig In The Sky, Pink Floyd, Roger Waters, Wizard of Oz, YouTube