Home › Rock Music › Bowie’s Artwork: Exclusive Interview With The Man Behind The Concept

Bowie’s Artwork: Exclusive Interview With The Man Behind The Concept

On the release of David Bowie’s new album “The Next Day”, Every Record Tells A Story is delighted to publish an exclusive interview with the man behind the artwork of this excellent album, 54 year old painter and decorator Reg Minty.

We met up with Reg at a run down pub in Grimsby, where he had been drinking bottles of K Cider since 11am.

“I feel really honoured to have been chosen by Bowie” he admitted, “I’m a painter by trade, but mainly houses and the like, so I thought there might have been a mix up when Bowie’s office called to ask me to submit something. I had been working on creosoting my brother’s fence and had become a bit preoccupied – when I suddenly realised it was the day I had to submit the Bowie thing. I panicked really. I had typed the album title on a post-it note that had been stuck on the fridge to remind me about it, and as I was running out of time I just put the note on top of an old album cover to keep it flat and took a photo.

“I’m not the best at cropping photos, and I half expected they would do it for me to be honest. Anyway, I sent it off and didn’t hear any more – I thought perhaps they had seen it for the Word for Windows and Ariel font bodge job that it is. You could have knocked me over with a feather when some marketing guy from New York rang me and said they wanted to use it. He was rabbiting on about post modern irony and some such, but I was just glad for the money. Do you want another cider?”

“Anyway, I thought we’re on to something here, so I sent off some other ideas, and they want to use more of them for the singles.”

“Since the artwork was revealed, my phone’s been ringing off the hook with other record companies wanting to see if I can do something for them along the same lines. At first I was worried that I wouldn’t have time to do my normal jobs – there’s a house down the road I am pencilled in to do next week – but actually the album stuff only takes five minutes. I’ve had calls from Primal Scream, More Light…

“My spelling was never the greatest, but no-one’s picked up on it yet. I think they’re all too stoned to notice”

…The Flaming Lips‘ The Terror… 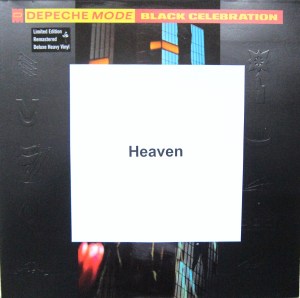 “I thought about a more gloomy typeface here, but I think it works well”

We discussed the impact of Reg’s work. “I think Bowie’s office think that people’s first reaction is that people will notice how an iconic album cover has been adapted to make something new and striking. To be honest most people’s first reaction to me has been to say either “I could have done that”, “How much did they pay you for that?” or “I wish I’d thought of it”.

“But they didn’t did they?”

Reg then spoke of future plans to collaborate with Bowie. “I read somewhere that he does his lyrics by cutting up phrases on bits of paper and mixing them around. It’s something to do with Wlliam Burroughs, whoever he is, so I have been cutting up bits of newspapers, glueing them on bits of paper and sending them off. My only mistake was sending one in to Bowie’s office without warning them. I think they thought it was a ransom demand or threatening letter and I got a visit from the police and now they won’t answer my calls….”

Coming soon: The Bowie Vinyl Challenge: How much would it cost to buy a full set of Bowie’s classic albums in their original vinyl?