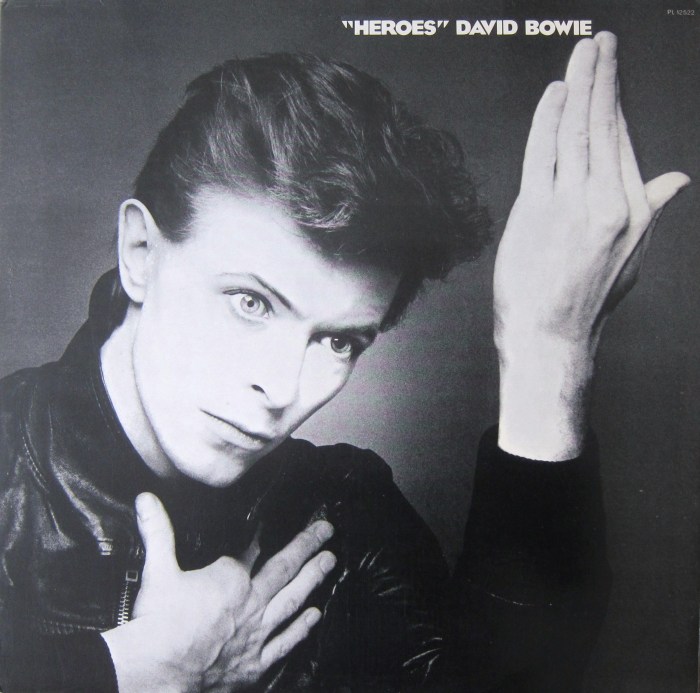 Looks odd without that big white bit of paper stuck over it now doesn’t it?

The story so far: I have made a bet that I can buy a full set of Bowie‘s albums (in their original vinyl versions – and in excellent condition with all the inserts) from The Man Who Sold The World to Scary Monsters (and Super Creeps). That’s fourteen albums in fourteen days. Total budget: £100. The loser has a heavy penalty: to buy drinks – and wear a Westlife T-shirt for a day. After a few days I have seven albums, having spent around £65. But there are quite a few gaps in the collection – and time is running out. I now have four days left.

For people who believe happiness is contained within thin vinyl discs, London is a good place to be. Despite HMV‘s troubles, vinyl lovers can still find a number of independent record shops to spend their hours of leisure merrily flicking through reams of old Barry Manilow and Cliff Richard albums in the (usually) vain hope that something decent will be hidden in between.

In order to track down inexpensive copies of Bowie’s back catalogue I decided I would need to spread the net wide. I started at Flashback, on the Essex Road in Islington. 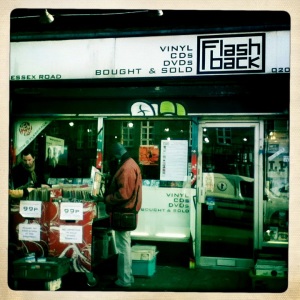 Flashback is the Beyonce of record shops – it looks great and has a well-stocked basement. They had plenty of copies of “Pin Ups“, albeit the cheapest was £5.99 – not too bad. I held off – for now. Also in stock was a nice copy of “David Live!” for £15 – again I waited.

I then moved on to Haggle Vinyl, just up the road.

This had more stock, but was more expensive. Original copies of “Ziggy Stardust” (£35), “Aladdin Sane” (£25) and “Pin Ups” (£19) were all present. Perhaps the local cashed-up Islington residents are unafraid of “confident” pricing, but I thought £19 for Pin Ups rather toppy – especially as it was £6 down the road. “How do I tell how much things are?” I asked innocently, noticing one copy of Pin Ups with no obvious price marked. This was an error. The owner was as charming as I am knowledgeable about the Russian inter-war fishing industry. After a brief one-way discussion about what had happened when the printer delivered some faulty stickers and what my question ought to be with that knowledge, rather than the simple question I had actually asked, I saw the ghost of what might happen to me if I developed too unhealthy an interest in old vinyl. I made my excuses and left. The best summary of my experience is perhaps contained in the sign below which is in the shop:

Berwick St in Soho has a few record shops, however, so I continued undaunted, but with slightly lower expectations. Perhaps it is not profitable for London’s record shops to sell vinyl for £5? There also appeared to have been a run on Bowie records since the news of his forthcoming album, making my task more difficult. Overnight, a mint copy of “Low” I had been tracking made over £25 on eBay. Perhaps most extraordinary was a mint copy of “Heroes” that I had tracked that fetched an unbelievable £125 on eBay. £125! For Heroes? It’s not that rare! This is irrational buyer behaviour, presumably prompted by the use of the cover in Bowie’s latest record. Unbelievable (another one went for £65). My timing was awful. This was not looking good…

So I visited The Music And Video Exchange…

…and across Oxford St to On The Beat 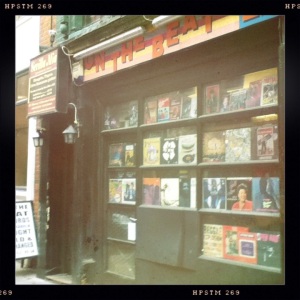 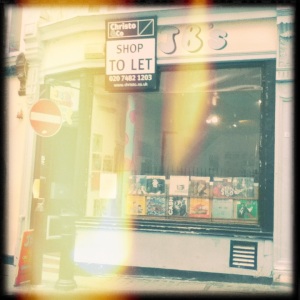 Hipstamatic: How to take a decent photo – and ruin it…

Of these, Reckless Records oozed class with the best quality (cleanest and most complete and collectible) items. “Low” (with insert and stickered sleeve) was £15, (take that eBay!) “Hunky Dory” £25, TMWSTW £20 and Stage £15. All too expensive for my self imposed budget, but they were all in fantastic condition. A Heroes picture disc was £12 and Live! was £20 for a first pressing with inner sleeves. It was – like a high class brothel (I imagine, he said quickly) – the sort of shop where you could spend inordinate amounts of money and still exit with a smile on your face.

The Music And Video exchange stood out for a) sticking with the word Video and b) the honest pricing of the first Tin Machine album (mint, with inner sleeve) of £3. Harsh but fair, given everything else was £20.

Aside from the bet, I was pretty reluctant to buy “David Live!” for the twenty quid that people seemed to want for it. The main reason for this was that, shorn of the visuals of the “Diamond Dogs” show, it is more an interesting document rather than a great rock n roll live album (although it does have nice versions of “All The Young Dudes”, “Here Today Gone Tomorrow” and “Rock n Roll With Me”).

To enjoy the album properly – and to put it into context – you really need to watch ‘Cracked Actor’, a superb hour long documentary produced by Alan Yentob which covered the Diamond Dogs tour and which was broadcast on 26 January 1975. Yentob persuaded Tony DeFries, Bowie’s manager, to allow filming because “it would be an exploration of a significant, serious artist in his new, American setting – and David agreed to grant him an interview.” It features some mesmerising performances from Bowie, including his singing Major Tom from a chair which is elevated above the heads of the crowd by a cherry picker and which looks magical. Bowie has shed his Ziggy and Aladdin Sane personas and appears to be somewhere in between Ziggy and his Thin White Duke character, which wouldn’t properly formulate itself until “Station To Station”. During an interview Bowie drinks from a carton of milk and compares his adventure in the USA to a fly in the carton, soaking up what is around him. It’s a fascinating snapshot of Bowie who was famously living on a diet of milk, red peppers….and cocaine. The Diamond Dogs tour had jettisoned The Spiders From Mars in favour of a more considered and theatrical show. In that context, “David Live!” is a nice document – but it needs the visuals.

Of Bowie’s live albums perhaps the best are the 1976 Nassau Coliseum recording that was in the recent “Station To Station” re-issue, or the Santa Monica ’72 album, the latter of which features the Spiders. The mark of a true Bowie fan used to be whether you had a copy of this Santa Monica bootleg. Although recorded from a radio show in 1972, it was finally released officially in 2008, so it wasn’t an album I had to track down for the bet.

I also found a bootleg of Bowie’s 50th birthday show (“Live At 50” – guest starring Robert Smith, Dave Grohl, Frank Black and Lou Reed) and rehearsals for the Serious Moonlight tour which featured Stevie Ray Vaughan on guitar. Vaughan played on the “Lets Dance” album, but did not tour – pulling out after these rehearsals apparently at the behest of his management who wanted him to be a star in his own right. He released his debut album “Texas Flood” in 1983 – the same year as these rehearsals. This is an unusual bootleg, in that it is listenable. Indeed it sounds great, with a real variety of 31 songs across the whole of Bowie’s career to that point. Bowie appears to forget the words to Life on Mars which is pretty funny, and changes the opening lyrics to Station to Station although Stevie Ray Vaughan is somewhat buried within the constraints of being in someone else’s band – save for a blistering “White Light White Heat”. Worth looking for online…

The live album I already had was “Stage”, which is good – and manages the trick of turning the ambient grooves of “Low” into arena rock. I saw a number of these in yellow vinyl for around £20, if you have the budget.

Overall however it was clear that Record Shops were not going to solve my problem of buying Bowie’s albums inexpensively. Next step? The record fair at London’s Spitalfields Market, which was on Friday – the day before my deadline. Time was running out if I was going to win the bet…