On the day that the last Orchestrator of British Sea Power (via the Falklands conflict) was buried, it was fitting that British Sea Power (the band) marked the occasion by laying unnecessary waste to a Shepherd’s Bush Empire that was minding its own business and retreating into an exclusion zone with a stunning live show last night.

First, a word about the support act. I have seen a few decent support acts in my time. But I have never seen the headline act be their own support band. Nice touch, boys. They popped onstage for a low key set of deep cuts before the main act. It was like an appetiser of lobster surprise before having a main course of lobster. But in a good, “I like lobster” sort of way. Decent metaphor, that, I’m sure you’ll agree.

After this amuse bouche came Toy – a London band whose debut album has done well and whose lead singer reminded me of Placebo’s Brian Molko looks-wise. Their debut album was decent enough, but they sound better live, and they earned a warm response from the packed crowd.

British Sea Power are based in Brighton which is (for those who may not know) a very nice seaside town in England, although three of their crew come from Cumbria, which also has seaside towns like Brighton, only colder. British Sea Power first came to my attention when they played Southend on Sea (another seaside town of medium temperature) whilst supporting The Manic Street Preachers in 2010. They had just released their third album “Do You Like Rock Music” and had one of the most unusual merchandise stalls I have ever witnessed, featuring tea towels, mugs and posters of sea birds.

One track, “Canvey Island” (ref. “Southend on Sea” for climate and geographical features of Canvey) stood out as it told of the town a few miles from where I live that suffered a flood in 1953, in which many people died. In the meantime I made a mental note of the Arcade Fire-like stadium-indie tunes which got Pitchfork a bit hot under the collar – they accused the band of sounding like U2, which as all good hipsters know is an inexcusable crime.

At the time, the band featured on The Culture Show playing a secret gig on Canvey itself, a clip of which is below.

Now supporting their sixth album “Machineries Of Joy”, their merchandise remains as entertaining as ever, and the music just as good. Front-men Yan and Hamilton swap instruments and lead vocal duties during a set with as many twists and turns as a twisty-turny thing. 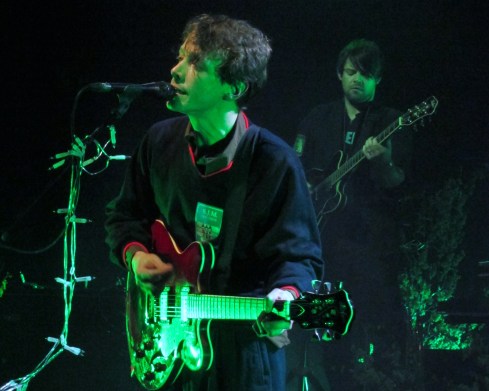 They kicked off with the one-two-three hit of Remember Me, Apologies To Insect Life (during which we were treated to out first taste of BSP’s rock n roll black bear) and new song K-Hole. On a stage bedecked with more fauna than the upper lip of Doug Henning, the band launched into a powerful “No Lucifer”, prompting “Easy Easy” football-style chanting from Shepherd’s Bush Empire. 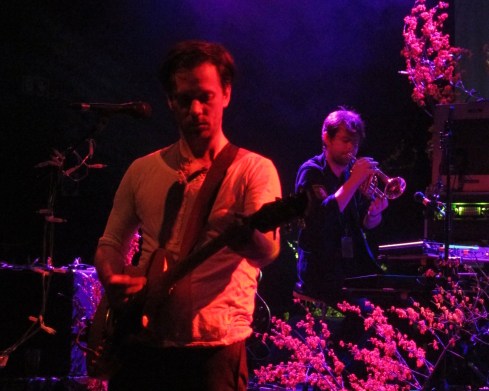 The title track of new album “Machineries of Joy” won approval from the audience who further warmed up with anthem Waving Flags (Isn’t “You are / Astronomical / Fans of alcohol / So welcome in” one of the most crowd friendly opening lyrics of all time?) At this point the first mosh pits opened up, only for the reflective and quite beautiful “Great Skua” to bring everyone back down to earth – or were we just soaring in the sky? British Sea Power showed here – and on more than one occasion – their ability to change direction and take their audience with them. “Please Stand Up” then got the crowd dancing and the set peaked with “St Louis“, assisted by a polar bear to gee along some frenzied mosh pit action. 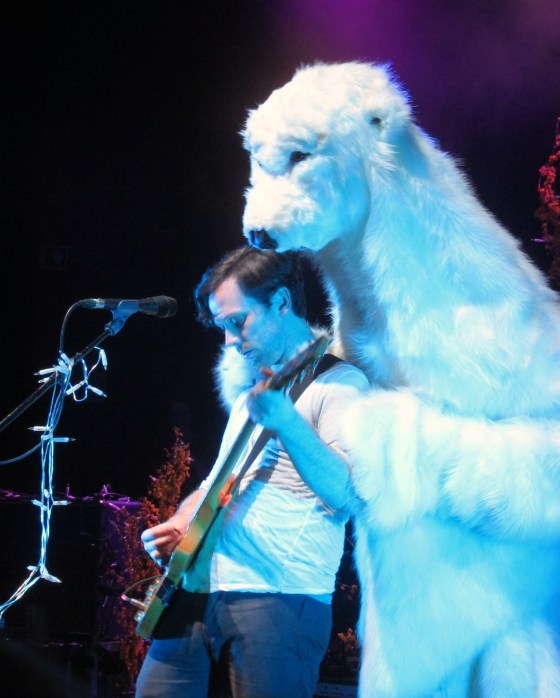 The double hit of “Carrion” and “All In It” then led to chaotic onstage scenes of both bears wrestling with the band gloriously before the encores.

British Sea Power remain something of a cult band, but their live shows suggest that, six albums into their career, they have one of the most compelling live shows around.

British Sea Power will perform their soundtrack live to a screening of the film “From The Sea To The Land Beyond” headlining at Sundance London Film and Music Festival on Sunday 28 April at Indig02. 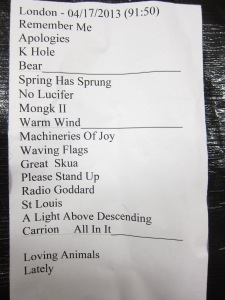