A Few Words on Jeff Hannemann and Slayer 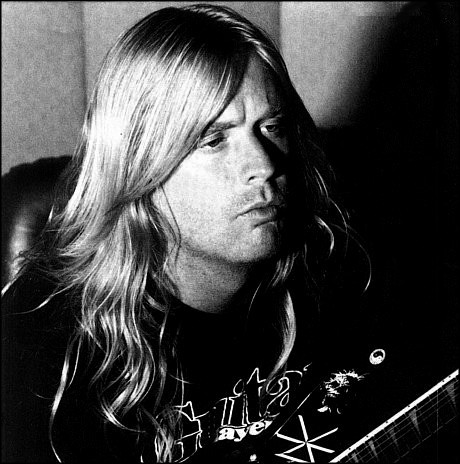 I was sorry to learn of the passing of Jeff Hannemann, Slayer guitarist, who died on 2 May 2013.

Hannemann, alongside fellow Slayer members – guitarist Kerry King, monster drummer Dave Lombardo and bass player / singer Tom Araya produced a game-changing record “Reign In Blood” which, thanks to its crystal clear production (by Rick Rubin) and incredible blend of precision and chaos still sounds as fresh today as it did in 1986 when it was first released.

That year, Slayer even managed some radio airplay – not from the controversial Reign In Blood, but when their cover of Iron Butterfly’s In-A-Gadda-Da-Vida appeared on the Less Than Zero soundtrack. I bought both albums on cassette to play on my Walkman. Those were the days…

I know that Slayer don’t appeal to everyone. Can a fan of Radiohead or Joni Mitchell really enjoy the bludgeon riffola of Slayer? Slayer is tribal. It is, for all it’s virtuosity, basic. There is beauty in its brutality. And it’s not for every day. But every now and then, perhaps when I have been listening to one too many Elbow and Jake Bugg albums, I just want to violently break those records over my knee (NB. I never actually do this) whilst shouting to no-one in particular “Turn off this tasteful, beautifully crafted tomfoolery…” (yes, I would use a word like “tomfoolery” – I am a man of great passion) “…and play some REAL music”. Sometimes, I don’t want to hear Django Django (pretty much most of the time actually). Or Belle and Sebastian (even though they are wonderful). Sometimes I don’t want to hear Pitchfork’s iPod, I want to hear Captain Caveman’s iPod.

Hannemann’s guitar work was described as “tooth extracting” in 1988, such was its ferocity. It’s a great description – you can almost visualise the drill when you hear some of those lead breaks…

You will already know that alongside Metallica, Anthrax and Megadeth, Slayer formed the “big four” so-called thrash metal bands who shook things up in the rock world in the mid-eighties. Slayer were the most extreme of those four. In time honoured rock tradition, they played faster and heavier than their peers and those who went before, just like Led Zep, Sabbath and Deep Purple did in the sixties and early seventies, and Judas Priest did in the mid seventies. The New Wave of British Heavy Metal led by Iron Maiden did it again in the early eighties. When I heard Maiden and Priest, it never occurred to me that anything could be louder, heavier or faster.

It occurred to Slayer however. It is testament to Slayer’s “Reign In Blood” than twenty seven years later, no other band has beaten it for sheer unadulterated ferocity and heaviness, although plenty have tried. The game stopped with Slayer. They won.

Jeff said about “Reign in Blood” in 1988 “You can’t really top “Reign In Blood”. What do you do? Go faster? How can you? In fact, on the last tour we were playing so fast that after the first three numbers everything just blurred”.

Follow up LP “South of Heaven” couldn’t compete for pace, so the band slowed things down. But only a bit. The album was reportedly banned in at least two states.

Said Hannemann, “We haven’t changed or compromised to get airplay. We still do what we want.”

Their live shows were legendary and the band had a great relationship with its fans: when questioned about their fanaticism, Hannemann was relaxed. “One guy…jumped onstage, grabbed my guitar…and started to sing the words right in my face…so I just hit him. And if things ever did get too far out of control we could always hide behind Kerry’s armband full of nails.”

Jeff Hannemann had been recovering from an illness caused by a spider bite during which he nearly lost an arm, according to Slayer’s website. The band had been touring with a substitute guitarist, and had been hoping to welcome Hannemann back later this year. He was just 49 years old.

Like Loading...
‹ A Visit To Chess Records…And When Muddy Waters Met The Rolling Stones
Look Out For… John Grant ›