A Look At The Haunting And Sensitive Poetry of… Whitesnake

Whitesnake. Fronted by David Coverdale, and best known for their eighties videos featuring Coverdale’s then-girlfriend, the actress Tawny Kitaen who fetchingly writhed on Coverdale’s car whilst risking catching her death of cold by not wearing very much. All shaggy flowing perms and pouting lips – and that was just the band.

And yet… before all that eighties nonsense Coverdale wrote some of the most haunting and sensitive ballads and mid-tempo blues numbers of the seventies and eighties.

I know it may come as a surprise to some, but the author of such classic feminist anthems as “Slide It In” and “Lie Down…I Think I Love You” also had a sensitive side.

Whitesnake was formed from the ashes of Deep Purple as a vehicle for Coverdale, who has the sort of pipes that England used to produce all the time (see Steve Marriott, Paul Rogers, Robert Plant).

Here are some highlights of the history of Whitesnake, according to the pages of Rock n Roll comics. First David Coverdale had a vision… 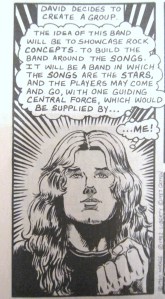 ….although he occasionally fell out with band members…

…so he did something about it….

…and then planned to take America by storm…

Only for the bass player to have an accident onstage…. 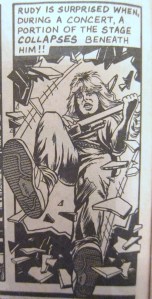 …in a Spinal Tap-esque moment…

What a brilliant (and key) moment to capture. Strangely, there is no mention of this incident anywhere else apart from in this comic book…

But we were talking about sensitive blues songs… “Don’t Break My Heart Again” and “Lonely Days, Lonely Nights” spoke of a man done wrong in the finest tradition of the blues. Both appeared on the mildly less sensitively-named LP “Come And Get It” – perhaps a high point for the blues era band. “Come And Get It” featured three ex-Deep Purple players including Coverdale himself plus the sublime organ playing of the late ivory-tinkler Jon Lord and drummer Ian Paice. Tasteful blues guitar came from longtime ‘Snakers Bernie Marsden and Micky Moody.

“Every day if my life it seems / trouble’s knocking on my door” he mourned… “Time and again I sing your song / but I’ve been running on empty far too long / I’ve travelled every highway and they all keep coming back to you / But don’t break my heart again / like you did before / I couldn’t take any more.”

OK, so it isn’t exactly Leonard Cohen, but it’s a great blues song.

On “Lonely Days, Lonely Nights” Coverdale admits “Women and Whisky are my only friends”. “One gives me strength and one just pretends” he adds enigmatically. I could imagine John Lee Hooker coming up with that line.

However, a listen to the faster-paced songs on that record quickly reveal the source of Coverdale’s woes, and perhaps those of Whitesnake also.

Whilst Coverdale is not (as far as I know) a problem drinker, his songs take on the character of an alcoholic abusive husband. All they need do is to dress themselves in a white string vest, and the picture would be complete. Essentially, Coverdale spends the whole album singing of womanising and carousing, and then sobering up and soul-searching, then relapsing. The dynamic of the album is like watching a man fall apart in front of you due to the damaging effects of alcohol dependency.

We open with “Come and Get It”, where Coverdale – all well-filled trousers and bravado – peacocks before some “lucky” lady. “Hot Stuff” follows and is a manic drunken confession of a man who “walks around at midnight / just looking for some hot stuff”, which I assume is more than a late night kebab with chilli sauce.

Then comes the hangover. The aforementioned “Don’t Break My Heart…” and “Lonely Days…” show a vulnerable and repentant man – doubtless with a sore head.

But then descends the red mist again. Next song up is “Wine, Women and Song“. Coverdale is once again hoyed up and playing to the gallery against the sound of a boogie woogie piano. “I ain’t an educated man / as all you Fleet Street preachers know” he sings, ” if I can make you smile / then I’ll raise my glass / and if you don’t like it / baby you can kiss my ass” he continues, before (you imagine) toppling head-first onto someone else’s table and upsetting all their drinks like Doctor Emmett Brown in Back To The Future 3.

Then…another hangover. “I’m a Child of Babylon” he pleads – i.e. it’s not my fault, it’s my parents. Hmmm.

Having found solace, out he goes again on the pull…

In “Would I lie To You” Coverdale pleads to a girl he has just met to spend the night, assuring her plaintively of his honest intentions. For four minutes twenty five seconds it’s all going rather well, until five seconds before the end of the song when he lets the mask slip: “Would I lie to you – just to get in your pants?” he enquires, all innocent. And then the red mist takes over again:” Heh, I think so..” he cackles like Russell Brand on a night out. Oh dear. Where’s his AA buddy?

But then comes the remorseful haunting poetry again. “All I have is yours / and all I ask of you / is give me love ’til the day I die”. It’s a bit pathetic really, after all that stuff about being a big swinging you-know-what…

Of course, I didn’t think about any of this when I first heard this album in 1986, aged 16. When he sang “Wine, Women and Song” I thought that made him a sophisticate (he drinks wine!) rather than the caricature of a drunkard that the song portrays. And it rocks like billy-o. What a great record this is!

I thought it would be hard (ooerrr) to write about Whitesnake (even the name is a double entendre). How do you ignore the innate sexism of “Lie Down… I Think I Love You?” (charmingly introduced in the live album “Live In The Heart Of The City” with “Hopefully this is something your tarts will say to you tonight”)? Actually, you can’t (although it’s a belter of a rock n roll song) – and that’s something you have to deal with. But there’s plenty of good stuff in Whitesnake’s oeuvre that isn’t crass and overly gynaecological. Does that excuse the rest? You could argue it’s rock n roll – it’s supposed to be subversive and rebellious, it’s a bit “Nuts” magazine, a bit of fun. But I think it has harmed Whitesnake’s career, and its like has undermined the hard rock genre. Which is a pity, if that doesn’t make me sound a bit pompous. Which it probably does.

I loved Whitesnake’s music in my teenage years and I can hear in the early albums shades of Deep Purple, and (in, say, “Love To Keep You Warm” from the Trouble album) Bad Company meets CCR. Seventies blues rock. As British as roast beef, in its own way. From the mid eighties (and the excellent Slide It In album) Whitesnake moved into Arena Rock, and to greater commercial success. I think they lost something in that transition, but the for the ten thousand people who are packing out Wembley Arena tomorrow, that’s not something Coverdale will need to worry about.

Whitesnake and Journey play Wembley Arena on 29th May 2013