Whilst we are on the subject of Dr Feelgood, (as we were yesterday) let’s also mention an exhibition that is currently running on Canvey Island that has been curated by the band’s manager Chris Fenwick.

The exhibition is the finishing post to an event to be held on Weds 26th June, when Chris Fenwick will be giving a guided tour of Dr Feelgood’s Canvey Island starting at The Lobster Smack and finishing at The Canvey Club, where Chris will be telling tales from the road. If you have seen the excellent Dr Feelgood documentary Oil City Confidential, you will have an idea of what is planned. 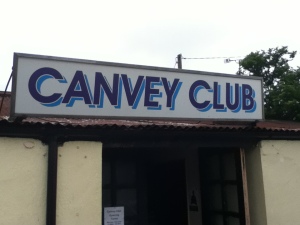 Set in a local pub, the only video screens are of the horse racing playing in the background and the audio experience is just the chatter of the locals having a pint and regretful mutterings about having backed the wrong nag. The sight of anything resembling Gucci was at a premium on the afternoon I popped my head around the door. Like the band, this exhibition has no need for frippery and pretension. There’s no gift shop filled with postcards and expensive limited edition prints. Instead, you can buy a book or LP / CD from behind the bar.

But around the walls is the most comprehensive collection of Dr Feelgood posters, press cuttings and memorabilia you will find anywhere on the planet. Behind some glass cases where (presumably) used to sit some trophies from the local darts team, are also some rare treasures. The Toby Mugs of the band that feature in the poster that promoted their album Let It Roll. Dr Feelgood cigarette papers (from where the band took their name). A bust of late singer Lee Brilleaux. Brilleaux’s harmonica. A part of the band’s old gigging PA system named “Terry the Triumph”. 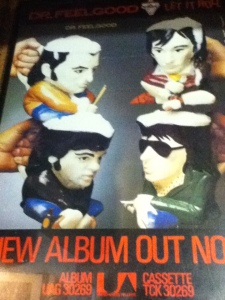 It’s not exactly a Kansai Yamamoto designed Bowie costume. But it’s a great idea that pub owners would do well to replicate – a visit would make for a fun and atmospheric night for Dr Feelgood fans – and I’m sure we can all think of pubs and bars with a musical connection with other bands that would benefit from doing something similar.

If you think about it, where better to have a rich and comprehensive tribute to the so-called “pub rock” movement…than in a pub?

The Dr Feelgood exhibition is on until the end of July at The Canvey Club, Canvey Island. See website for details of the Chris Fenwick Canvey Island Walk.