With Black Sabbath’s album out tomorrow, it is time to dust off your black cloak, wizard’s hat and faded copy of Alistair Crowley‘s Big Book of Magic (Vol. 1: Card Tricks), throw them in the bin, and make some space for some new Sabbath vinyl in your collection.

Sabbath have always courted controversy, from the anti-Vietnam sentiments of “War Pigs” to Bill Ward’s horrendous red tights on the cover of Sabotage. 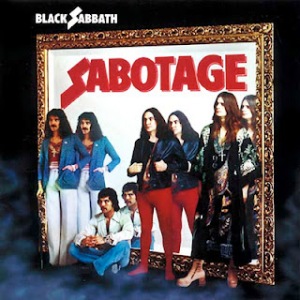 The new album has been produced by Rick Rubin, the man responsible for classic metal albums such as Slayer’s Reign In Blood, Danzig’s self titled debut and Northern Star, the 1999 solo album by Melanie C.

The reunion is a Big Deal for many, because aside from a brief reunion and live album in 1997, this is the first time the original line up have recorded together since the epoch-making run of eight albums that Ozzy, Tony, Geezer, Beaky, Mick and Titch recorded in the seventies.

After those heady years with Ozzy, Black Sabbath tried a few other singers: (Deep Breath) Ian Gillan, Ronnie James Dio, Glenn Hughes, Ray Gillen, Tony Martin, old Uncle Tom Cobley and all. In fact, this means Black Sabbath has had the same number of singers as the Sugababes, although perhaps unsurprisingly never the same individual (I heard Ian Gillan failed the audition because the other girls were jealous of his lovely hair).

When Gillan joined the band they toured with a set of Stonehenge, which caused problems later parodied in Spinal Tap. Sabbath manager Don Arden wrote the dimensions down for the set manufacturers in metres, but should have written it down in feet. As a result the set was 45 ft high instead of 15 ft high and it wouldn’t fit on any stage the band were due to play. True story.

Sadly, this time around drummer Bill Ward will not be rejoining the band. Ward blamed the business deal he was offered whereas Ozzy told Mojo Magazine they had questions as to whether Bill was in good enough shape to play for an hour and a half.

Ozzy continued less subtly, “You know them yellow f- stick on memo notes? He had them all over his f- drums. I was like What the f- that for Bill? He said “I can’t remember what I’m doing”. I go How are you going to remember out of those 500,000 bits of paper stuck all over your kit, which one you’re looking at Bill? “I’ll know” Ah great.” Thus Bill Ward is the first musician to have left the band not for “musical differences” but for “Post-It Note Differences”. In true tabloid fashion, let’s call the controversy “Post-It Notegate…”

Iommi more recently suggested his (Iommi’s) January 2012 diagnosis of lymphoma made him reluctant to delay any reunion whilst business matters were concluded.

Instead, Brad Wilk the former drummer from Rage Against The Machine plays. The new album perhaps misses Ward’s jazzy fills, but I suspect the live shows might have a bit more power. There seems little chance, sadly, of Ozzy rapping over a cover of Killing In The Name Of…

In the meantime, for those looking to truffle through the Sabbath back catalogue, it is difficult to go wrong with the first five or six LPs, and of those, “Paranoid”, “Master of Reality” and “Sabbath Bloody Sabbath” are the pick.

If you are a vinyl enthusiast, Paranoid was released on the Vertigo label – recognisable by the distinctive psychedelic swirl. The first pressings have a “large swirl” on the label. 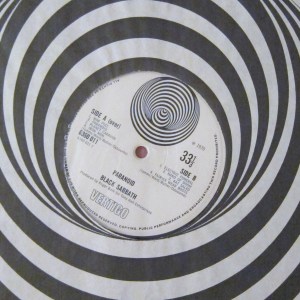 Later ones have a smaller swirl and the word “Vertigo” directly underneath:

The Master of Reality album comes in a card “box” sleeve with the lyrics on the back and early copies came with a poster of the band also. The box is a bit fragile and weedy, like the quiet one in The Wanted. Rather like the rock stars of 1972, it’s becoming increasingly tricky to find one in good condition and with few creases or blemishes – but they do still exist.

Sabbath Bloody Sabbath came in a gatefold sleeve originally with a lyric-clad inner sleeve so look out for one of those, as there are plenty of later non-gatefold versions.

Opening track “End of the Beginning” begins like the classic track “Black Sabbath” – you half expect to hear Ozzy singing “What is this I see before me?”. It’s a decent eight minute tune that might have slotted neatly on the first album. Next up is “God Is Dead” which clocks in at nearly nine minutes. You can hear that below. It builds…

“Loner” is decent, but no Sweet Leaf, albeit Iommi’s solo is excellent. “Zeitgeist” is a Planet Caravan-esque Sabbath ballad – the sort of stuff they did so well on those early records. Lovely.

“Age of Reason” has a riff that’s as unrelenting as Heather McCartney, then “Live Forever” gallops along like a young Shetland pony that has eaten a good oaty meal – there’s also some nice interplay between Iommi and Ozzy. “Damaged Soul” then plods moodily for a while before making you sit bolt upright thinking “that’s Ozzy on the harmonica!” No sooner have you recovered from this nod to “The Wizard” from the debut album, Iommi then peels off the bluesiest couple of solos you’d ever wish to hear, at which point the pace picks up to round off a great song – probably the highlight of the album. “Dear Father” ends things nicely.

Overall, it’s a better record than we had any right to expect, even if it lacks the killer punch of an “Into The Void” or a “Sabbath Bloody Sabbath“. But then, if this turns out to be the “classic” Sabbath’s last album, it’s a far better send off for Ozzy, Geezer and Iommi than “Never Say Die” was.

And if that has whetted your appetite, let me tell you it is currently streaming on iTunes so you can get a sneak preview…

Black Sabbath are touring the UK in December. 13 is out tomorrow.

Like Loading...
‹ New Dr Feelgood Exhibition Hits Canvey Island
Beelzebub Had A Devil For A Sideboard and Other Misheard Lyrics ›