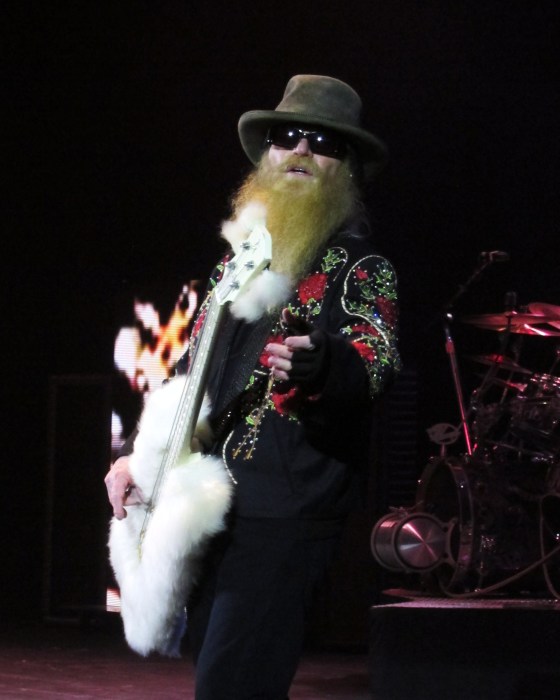 For some people ZZ Top are seen as something fun that happened in the eighties, like the Sinclair ZX81, perms, Rubik’s Cubes and the threat of nuclear annihilation. Those synth-guitar albums “Eliminator“, “Afterburner” and “Recycler” (the latter actually released in 1990) produced some of MTV’s most memorable videos featuring legions of girls, three guys, two beards (and a drummer called Frank Beard without a beard – which everyone thinks is very funny, but then Billy Gibbons didn’t walk around with a monkey on his shoulder did he?) and one car with a magic silver keyring. 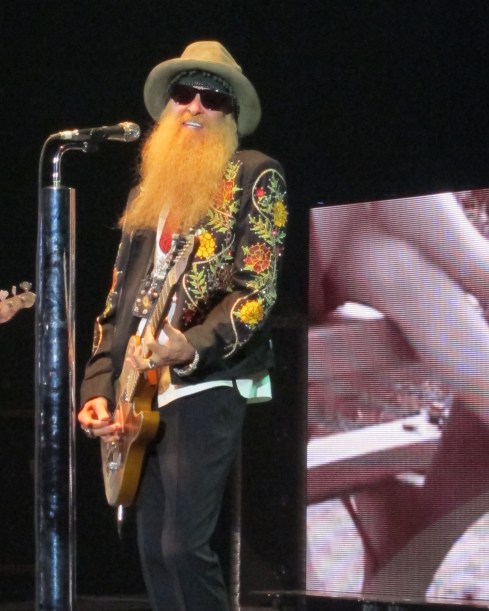 And, for many people, that was that. The nineties arrived to the sound of Nevermind, and ZZ Top dropped off the radar never to be heard from again, unless you play the DVD of Back To The Future 3.

Not true of course. To my mind, and to their many fans around the world, ZZ Top have never gone anywhere, and in Billy Gibbons, have one of the greatest guitarists of all time. 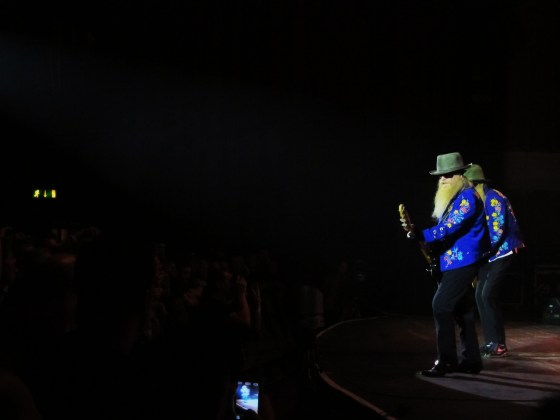 Not only was Eliminator the first record I ever bought, I even had one of those ZZ Top keyrings. The tragedy of that was that I didn’t own a car at the time. It just had my front door key on it. Yet despite such slavish devotion, the fact is that I last saw ZZ Top in concert nearly 27 years ago: at Wembley Arena in 1986, a lamentable state of affairs, and one I redressed at last night’s Hammersmith Apollo show. 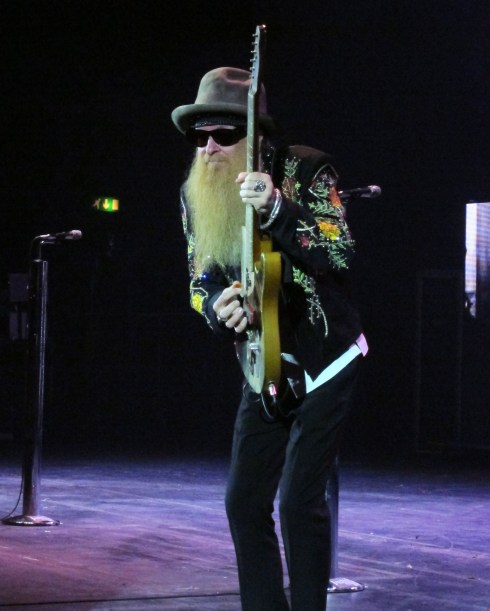 ZZ Top were formed in 1969, when guitarist Billy Gibbons asked American Blues members Dusty Hill and Frank Beard to join him in a new band. All three grew up listening to an amalgam of late night Nashville and Mexican radio, plus the British Invasion blues of Clapton, Beck, Page and Peter Green. ZZ Top supported The Rolling Stones in ’72, and – uniquely – has had the same line up for 44 years (try to name another band that can say that). In Billy Gibbons they feature a guitar genius, whose signature style of play – flashy blues licks with clever use of pinch harmonics- is immediately recognisable. I have previously said that I would give my right arm to play guitar like Billy Gibbons, something that would present all manner of practical problems. Don’t just take my word for it, though. Jimi Hendrix said that Gibbons was a favourite. 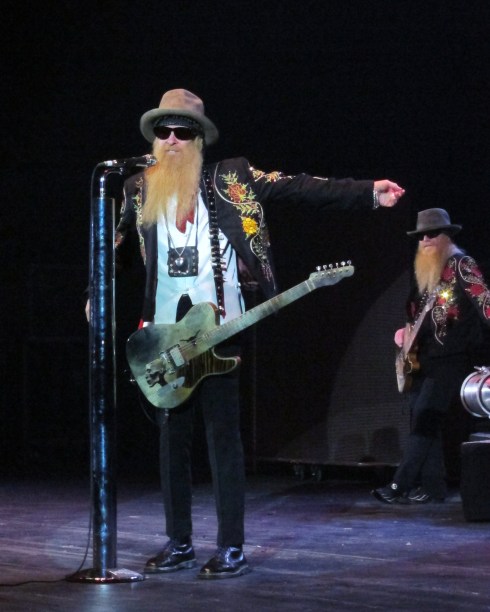 Billy Gibbons may be old enough to have supported Jimi Hendrix in a former band, yet he is modern enough to have appeared on Queens of the Stone Age’s Lullabies To Paralyse album. He plays a guitar almost as legendary as himself, a ’58 Gibson Les Paul called “Pearly Gates”.

Prior to 1983’s Eliminator, the band produced some classic blues and boogie records that I would happily play all day long, the pick of which were ’73’s “Tres Hombres”, ’74’s “Fandango!” and ’79’s “Deguello”. 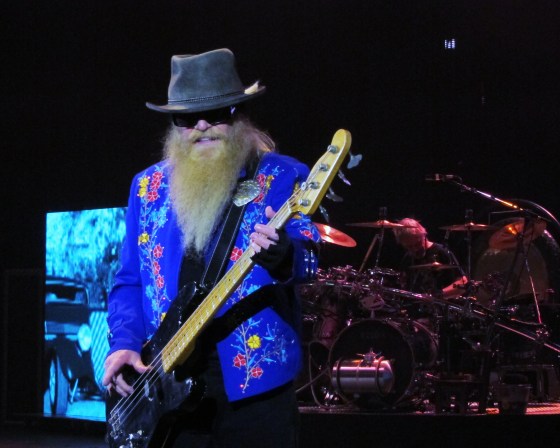 To bring those of you who may have lost touch with that ‘lil old band from Texas (a phrase every writer is legally obliged to use at least once when referring to ZZ Top), there have been five albums since Recycler:

At last night’s show we heard some new tunes, some very old tunes, and some of those eighties hits: something for everyone. ZZ Top came onstage after a brief film introduced the band members (“This film is rated ZZ” said the legend across the screen). 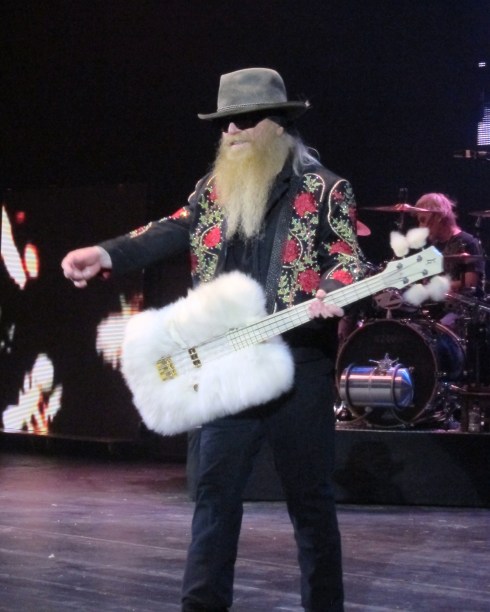 I didn’t appreciate what an extraordinary factor the beards are until last night. As Hill and Gibbons walked onstage (with matching garish jackets) it was almost like observing a couple of cartoon characters, unchanged from those MTV videos. To emphasise the point, opening number was “Got Me Under Pressure” which gave way to two favourites from Tres Hombres, “Waitin’ For The Bus” and “Jesus Just Left Chicago”. Wonderful stuff. Before we could catch our breath, along came “Gimme All Your Lovin’” played with gusto as Dusty Hill and Billy Gibbons shimmied and even sashayed their way in unison across the stage like a couple of elderly, bearded crabs at a dressage event. The original video played in unison just to remind us what a huge hit this was. 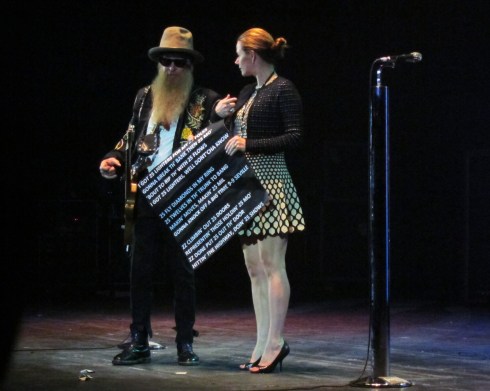 He then held up some lyrics explaining that he had recently forgotten the words to (first single from the La Futura album) “Gotsta Get Paid“, so made up some new ones “that were better” and is using those ones now.

Other new songs included “Flyin’ High”, “Heartache In Blue” and an excellent “Chartreuse” in between which we heard Hendrix’s “Foxy Lady”.

The set concluded all too quickly with “Sharp Dressed Man”, “Legs”, a quick costume change (new jackets) and some pre-Eliminator classics for an encore, Tube Snake Boogie, La Grange (with Sloppy Drunk / Bar-B-Q) and Tush. 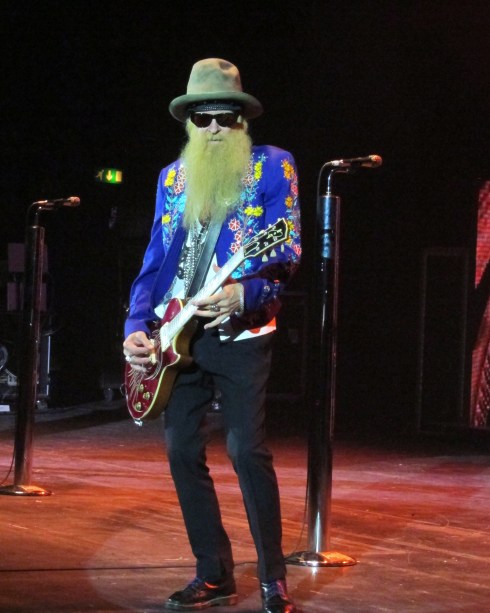 It was a real treat to see ZZ Top at Hammersmith last night. In 1986 they had a heck of a flash stage show (they disappeared in a puff of smoke leaving behind spinning guitars), but rather than magic tricks, my overriding memory of last night is of two bearded men (and their drummer) just smiling and having fun playing the blues. Which is what it’s all about, right?

PS. A word about the support act: The Ben Miller Band. These guys were apparently thrown in at the last minute: (said Gibbons, “They didn’t realise you needed passports. We asked them if they had been to Europe before, they said “We haven’t even been in a plane before!”) The Missouri band warmed up, nay, won over the ZZ Top crowd with some excellent country blues. They even threw in a cover of House of the Rising Sun, resembling two country punks and their uncle. Imagine if the Dukes of Hazard had been into skating and Black Flag, not cars. Yet they sound like a bluegrass Seasick Steve. 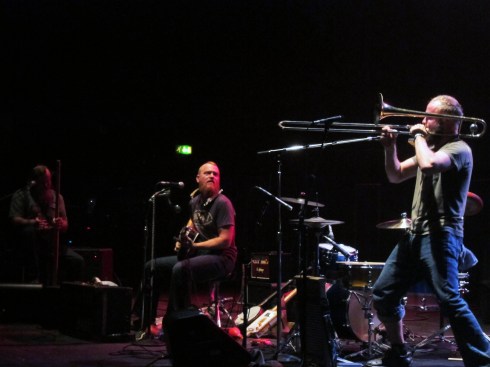 Drummer Scott spent time between playing his kit and playing a myriad of other controversial instruments including a trombone, a wash board, electric spoons (both plugged into a wah wah pedal and effects board) and a mandolin, depending upon the requirements of the song. Bass player Ben played a wash tub bass, naturally. They were quite brilliant.

ZZ Top are on tour across Europe now. Support is by The Ben Miller Band. And in the merchandise store, you can still buy one of those magic ZZ Top key-rings – and some “cheap sunglasses” – each for a “mere” £15.