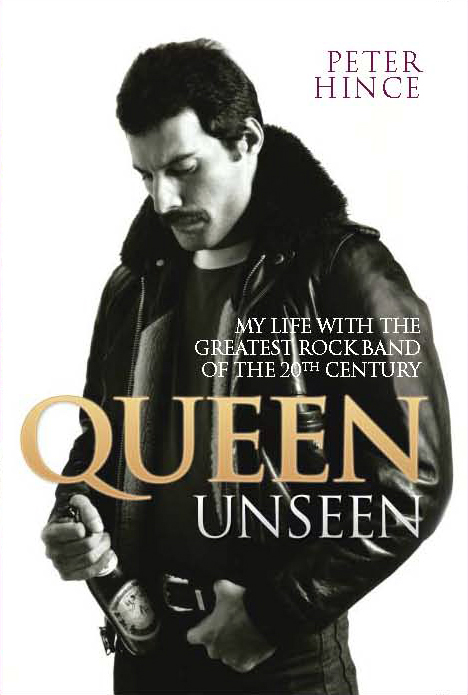 Peter Hince was Freddie Mercury‘s roadie and has written a book of his experiences called Queen Unseen. It’s an entertaining first hand account, especially considering a roadie wrote it: it isn’t written in crayon which is a good start.

Apparently it took three years for Peter Hince to finish his first book. Which is a long time for the first Harry Potter, but then there are some tricky words in there… (OK that’s enough Roadie jokes)

In all seriousness, this is a good read and you will learn plenty about life on the road with Britain’s most flamboyant rockers, Queen. Here are ten things I learned from the book that I hope will encourage you to check it out:

1. Any soft toys thrown onstage by the audience at Queen gigs were blown up with pyrotechnic powder by the Road Crew. Quite why people threw teddy bears at Queen is unexplained. You don’t see that at, say, Queens of the Stone Age gigs.

2. After a show in New York, the backstage entertainment included female mud-wrestling and dwarves with moustaches in leather clad shorts serving the drinks. Just a normal day at the office…

3. The story that a party in New Orleans featured dwarves circulating amongst the guests with bowls of cocaine strapped to their heads is a fabrication. Shame.

5. Approaching Stevie Nicks to say she owes you $20 “because the last Fleetwood Mac album was crap” does not go down well.

6. When in a sushi restaurant in Japan, there is a polite ritual of being given a small handkerchief sized towel, either hot or cold and sometimes delicately perfumed. However, “it is not the done thing to use them for your armpits in a restaurant.” Which explains a lot about the looks I got from the staff at Wagamamas last time I went there…

7. If you ever want to throw a TV out if a window, “make sure you have the set switched on and attached to a long extension cable. This way when it hits the deck it will give off a bigger and better bang” although Hince warns “this is not recommended if aiming for the swimming pool”.

8. Brian May was less of a drinker than Eddie Van Halen, so after the two met at a hotel in Portland, Oregon in 1982 and tried to keep up with each other at the bar, Brian spent the rest of the night throwing up. Those crazy rocket scientists, eh?

9. When Queen were working in Wessex studios they were next door to The Sex Pistols who were doing their early recordings. Although generally quiet pleasant sort of blokes, one afternoon, Sid Vicious stumbled in worse for wear and asked Freddie “Have you succeeded in bringing ballet to the masses yet?” (A reference to a quote Fred had made in the media). Recalls Hince: “Fred casually got up, walked over to him and quipped “Aren’t you Sidney Ferocious or something?”, took him by the collar and threw him out”.

10. Queen’s tour manager, Gerry Stickells had been Jimi Hendrix’s roadie and once told Hendrix that the Blue Boar service station on the old A1 was a place that all the bands stopped at.

Says Hince: “Hendrix sauntered into the transport cafe, guitar in hand, expecting to jam with other musicians….He didn’t get a jam: he got a fry-up with brown sauce and some very strange looks from lorry drivers”.

Queen Unseen: My Life With The Greatest Rock Band of the 20th Century by Peter Hince is released in paperback on 30th June 2013

Like Loading...
‹ 44 Years And Counting: ZZ Top Live At Hammersmith Apollo
An Analysis of The Lyrics to ZZ Top’s Ten Foot Pole ›