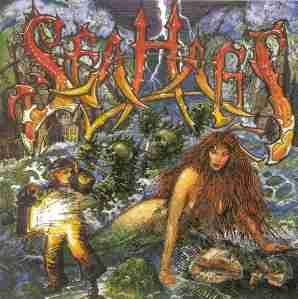 Naming a band is a thorny problem. There must be plenty of bands whose fate was sealed the moment they gave themselves a name. Would The High Numbers done as well if they hadn’t become The Who? Would Kiss have become an arena-filling behemoth if they had stuck to Wicked Lester?

But it doesn’t seem to be that easy – without hindsight. Even The Beatles took criticism in their early years for having a daft name. * Which brings us to the third album in “Rock’s Greatest “Lost” Albums of the Eighties”: Sea Hags – by Sea Hags.

Based purely on the name, this was a band that was perhaps destined never to sell out arenas. The phrase “Sea Hags” might conjure up a Greek myth, and not the sort of Greek myth such as “their economy will be okay”. I mean one of those Sirens-calling-sailors-to-their-doom-with-their-wonderful-singing variety – only to be revealed as ancient horrors, which you may not know is where the producers of TV show The Voice got the idea from. As a name for a band? I’m not so sure.

In 1989, Sea Hags released a near perfect debut album of Guns n Roses style “Sleaze Rock“, as this short-lived genre became known. I bought the album – on cassette – on the day of release and thought it was brilliant.

The Sea Hags album was very much in the style of the first Guns n Roses album and as it happens was produced by Appetite for Destruction producer Mike Clink shortly after he finished the latter record. Sea Hags is perhaps not quite as urgent sounding as Appetite For Destruction, perhaps less punk-influenced, and thus didn’t propel Sea Hags to such dizzy heights – but “Sea Hags” still has a strong claim as a “lost” classic nevertheless.

Opening track “Half The Way Valley” might have graced GnR’s debut album without weakening it, appropriating the riff from Led Zeppelin’s Rock n Roll to good effect.

“Too Much T-Bone” is not as I first thought the first protest song about Hawksmoor Restaurant, but has a great riff. “Someday” is as close as this band got to a ballad, which is to say not very close. The stand out track for me however was “Three’s A Charm” which managed to combine a bored, sneering vocal with (for once) an urgent punk rock riff. A cousin perhaps of Guns n Roses’ “It’s So Easy”, and every bit as good, despite being over as soon as it begins.

Sea Hags were formed in San Francisco in Christmas 1984 by frontman Ron Yocom, and bassist Chris Schlosshardt. “One night we were tripping on acid and decided that we wanted to form a band playing Yardbirds style hard rock” said Yocom in a 1989 interview. “I was staying with Chris at his father’s house in Santa Rosa, it was two or three in the morning and we took Chris’ dad’s big old Cadillac and drove out into the fog. The two of us sat talking for hours about the essence of music and how…bands don’t seem to be putting as much feeling into their songs as our heroes like Led Zeppelin, The Rolling Stones and The Beatles once did. We felt it was kind of a duty of ours to put this right.”

“We didn’t even have a pen with us”, said Schlosshardt, “so we went back to my place and we wrote down the riff to “Bunkbed Creek”.

The band got a break when Metallica’s Kirk Hammett produced a four track demo in March 1986. “Kirk even played lead guitar on “Love Kills”. It was real cool” said Yocom. The track later became “Under The Night Stars” on the debut album. They signed to Chrysalis Records in December 1987.

The release of the debut album and tour was postponed apparently due to Yocom and Schlosshardt’s drug habits. The band did tour the UK after the album’s release in support of The Georgia Satellites, but disbanded in 1990 and sadly Schlosshardt died in 1991 of either pneumonia (Wikipedia) or a heroin overdose (several other internet sources). The drummer, Adam Maples became Guns n Roses’ drummer for a brief period before Matt Sorum stepped in.

It is a shame Sea Hags demonstrated not so much an appetite for destruction as an appetite for self-destruction. For a minute there, they looked like they might be a really exciting band. Malcolm Dome, writing a live review in 1989 said “Sea Hags have got it all. They are gonna be huge.” He was right about one thing. Too bad he was wrong about the other.

* One theory I have is that a band should test how the band name sounds when they say “Wembley Stadium, will you please welcome….(insert name of band here)!” If you try this now with “Coldplay” and then with “Yeti Lane”, you’ll understand that the latter will never sell out a stadium, no matter how good their records might be.

Read the other posts in this series of Greatest Lost Albums of the Eighties: