Another Look At The Top of the Pops Annual 1978 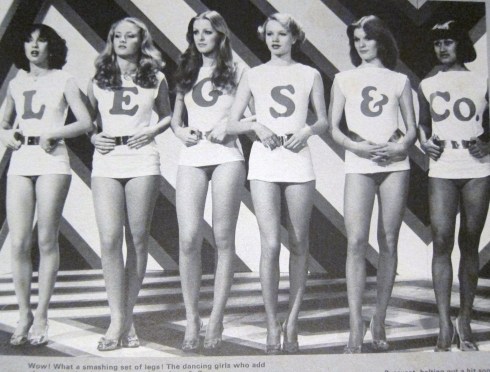 Like the sad, drippy mess revealed to the world by Janet Ellis in the Blue Peter Garden (and I don’t mean her daughter Sophie Ellis Bextor) the 1978 Top of the Pops Annual is a fascinating time capsule of life in the seventies. 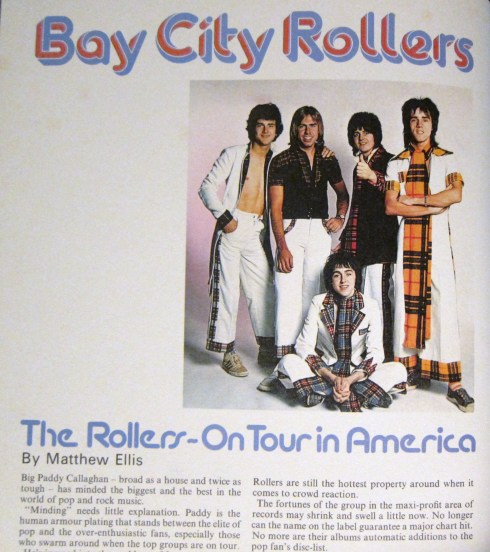 I expected to see Blondie, The Undertones and The Clash. Instead, featured acts include Paul Nicholas, The Bay City Rollers and David Essex. Pretty much sums up the Top of the Pops experience in a nutshell, that. I distinctly remember as a teenager tuning in when Iron Maiden had hit the top five, knowing that the TOTP producers would be unable to ignore such a high chart placing and would be duty bound to broadcast the song. They were well ahead of me of course. A twenty second snippet was played in a “chart-round up” section, whilst Sinitta or whoever would get the full three minutes and thirty seconds of mind-numbing hi-NRG electro pop despite the fact their song had fallen from number sixteen to number twenty three in the previous week.

So the annual is very much like the show – refusing to be bound by the shackles of good taste. It also has some great stories of life at the top of the pop charts:

The David Essex story (by Pauline McLeod, Pop Music Columnist, “Daily Mirror”) reveals a slightly bizarre approach to David Essex’s security. “Gone are the days” she laments “when David would leave a theatre dressed as a policeman or a plumber or be carried off in a freight container”. I have a picture of a large crane outside the Doncaster Gaumont after a David Essex gig ostentatiously carrying a shipping container out of the backstage area whilst a thousand teenage girls stand somehow un-distracted outside the stage door waiting for their idol… 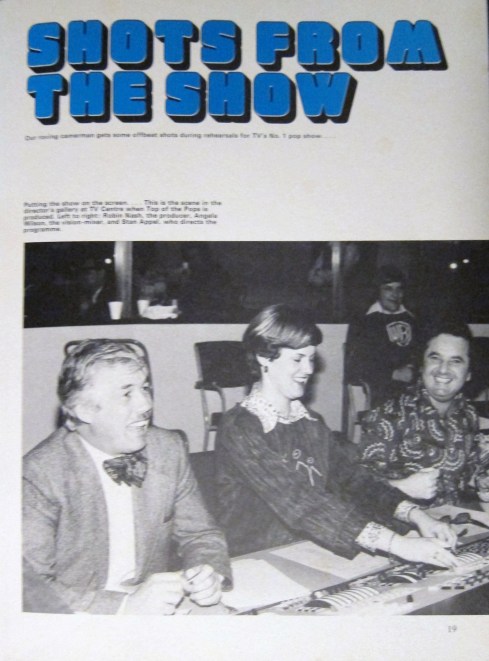 Next up is “Shots from the Show” which is notable for the attire if the people who ran TOTP. No wonder the rock bands didn’t get played much. The producer looks like his throat is being attacked by a rather oversized gaudy moth, but closer inspection reveals this to be a somewhat unpleasant bow tie. The caterpillar settled on his upper lip is, when further examined, a moustache.

If ever two things were ever not meant to go together it is rock n roll and bow ties. 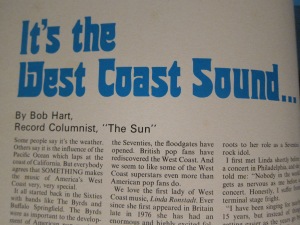 An article by Bob Hart, Record Columnist, “The Sun”, on the West Coast sound (USA, rather than Cornwall – four pages on the hotbed of rock n roll that was Cornwall in the 1970’s might be a bit much) reveals that The Eagles started their careers as Linda Ronstadt‘s backing band. It also puts forward a new name to look out for: “My own favourite of the West Coast ladies is the bubbling freckle faced Bonnie Raitt. She writes superb songs…and by the end of the seventies could be challenging Linda (Ronstadt) and Joni (Mitchell) for the top spot”. 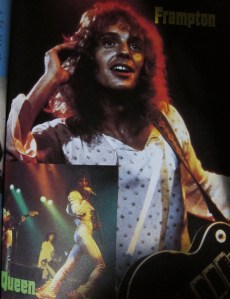 “I can’t hear you!” shouts Frampton to both members of his audience…

Hart also speculates as to who will be the biggest star of the seventies. Will it be Elton John (probably, he thinks) or Springsteen – who will only be a contender if he can “free himself of his legal shackles”. This was when The Boss was in dispute with his record company during the making of The Promise. The other three contenders are Bob Marley, Freddie Mercury and…..Peter Frampton? Which just goes to show how Frampton’s career rocketed upwards…and then back down again. “He looks a million dollars, which is roughly what he earns in a good quarter” says Bob Hart.

There’s also a nice quote from Freddie Mercury who explains some bruises on his neck: “Two girls outside the hotel decided to claim my scarf as a souvenir. Unfortunately they ignored the fact it was wrapped around my neck at the time. I’m sure Her Majesty doesn’t have to suffer that sort of indignity. But then, she hasn’t got anything in the charts at the moment, has she?” 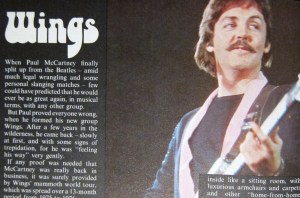 Other Earth shattering revelations include a Wings tour exclusive: They went with “two enormous articulated trucks full of electronic equipment, speakers, amplifiers, lights and musical instruments”. Wow, fancy that. And there was I thinking they’d leave all that behind. 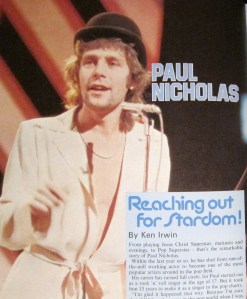 The lovely Vince Pinner from “Just Good Friends” had an interesting pop career under the stage name of “Paul Nicholas”.

After a deep intellectual portrait of that tortured young artist Paul Nicholas (he tells us the worst thing about playing Jesus Christ is “wanting to scratch my nose” whilst on the cross) we are treated to a treatise on song writing by Bernie Taupin. “I just don’t know how everything has happened” he says. “I’m a lazy writer. I can’t spell to save my life. And my handwriting is so bad that…only my wife can understand it”. Hope for us all there.

Finally comes “This is our Top Ten…say the Deejays” an article that lists the TOTP presenters’ favourite records. Notably, only “Kid” Jensen lists The Beatles, Stones, Dylan and Hendrix. Both Blackburn and Edmonds like Chicago’s “If You Leave Me Now” and have lists blander than scampi and chips. No wonder I grew up never having heard Led Zeppelin…. 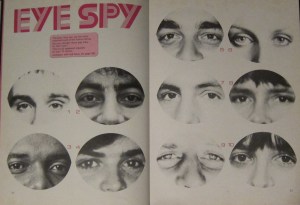 I’ll leave you with a quiz – can you guess the stars from their eyes?

* If I can summon the enthusiasm