Home › Indie › Everything You Need To Know About Cassette Store Day

Everything You Need To Know About Cassette Store Day 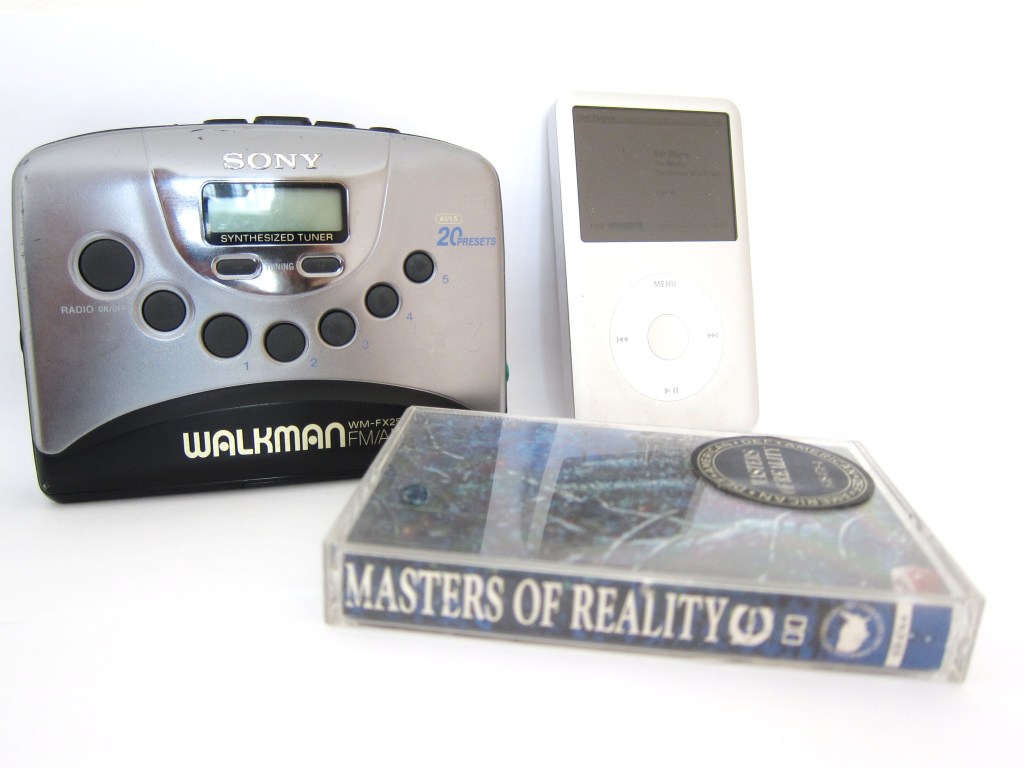 Ancient technology.
The iPod classic (right) next to one of those new fangled cassette players.

“Music sounds great on cassette. I have a big collection of original albums on cassette from artists like Dylan , The Rolling Stones, The Byrds, MC5 & Suicide. I also have great compilation tapes I made to play on Primal Scream tours. Cassette is a cool medium to listen to music on. Warm and fat. Good bottom end. Yeah! X” – Bobby Gillespie 2013

When I first saw there was to be a Cassette Store day in 2013 I had the following reactions:

But it’s true. Just like vinyl, sales of cassettes and cassette singles in particular have sky-rocketed in the last twelve months – in fact in the latter case they have trebled. Hurrah!

Sadly, a closer look at the figures show a slightly less rosy picture than vinyl. Sales did indeed treble in 2012, but total sales of cassette singles, for example were 604 units, of which 480 were for one single – Feeder’s “Borders”. Total cassette album sales in 2012 were 3,823, which is so few that it is less than the number of people who attended Leyton Orient’s last home game, and only 3,229 more than the first week sales of Johnny Borrell’s new album.

To be fair, this is more copies than were sold in the UK on the minidisc format, which managed 270 sales last year (presumably all to the same psychiatric unit) but that’s about all that can be said for a format that, were it a racehorse, would have been turned into Pritt-Stick some time ago.

Or so we thought….

Well, when someone like Bobby Gillespie tells you that cassettes are cool (see quote at the top of the page), you have to sit up and take notice don’t you? Having said that, this is wisdom received from a man who apparently ingested so many illegal substances that he probably still thinks either a) it’s still 1989 or b) that cassettes are the latest technology. There’s a brilliant story about Primal Scream told by journalist James Brown where he heard members of Primal Scream discussing whether to get Vietnamese, Chinese or Indian. When asked if a burger would be okay, the band members exclaimed, “It’s heroin we’re discussing, not food!”

Long term readers will know that I am one of the UK’s leading “experts” on cassettes*, having appeared on the BBC4 show Pop Charts Britannia making a fool of myself trying to tape the charts on an unfeasibly sized boom-box.

So: 7th September will be the inaugural Cassette Store Day 2013. These aren’t actually new shops – they are using the same sort of record stores that participate in Record Store Day in a sensible use of the Earth’s resources. It’s the same idea as Record Store Day – new and exclusive releases only available in Independent Record Stores for cassette enthusiasts, hipsters, nerdlings and cheapskates (the latter assumes these releases will be keenly priced as is promised). Bands supporting the day include Flaming Lips, Suicidal Tendencies, Deerhunter, Haim, Efterklang, Animal Collective and (as they used to say on K-Tel ads) many, many more. There’s a full list here on this link to Cassette Store Day’s Website. Record Stores such as Rough Trade East are supporting the day with live music (details here).

All of this is, of course, tremendously exciting……

But there was a nagging doubt in the back of my mind. Is a cassette revival a good thing? Or is this just an idea that is nice in theory, but less wonderful in practice? Didn’t the iPod just take the advantage of cassettes (portability), and then take away all the disadvantages (i.e. not carrying your entire music collection with you, skipping tracks, having rechargeable batteries, making playlists)?

Cassettes were wonderful because they had a certain romance, but that wasn’t always in the shop-bought product – it was in the romantic gesture of a mix-tape, taping off the radio, making a collection of tracks for a road trip, or in swapping music with friends by post or in the playground. Cassettes were DIY products. And what about sound quality?

Well, I had a few doubts, so what was required was a Scientific Cassette Test. I dug out my old Walkman and a cassette, and dug out some sonic testing equipment. The latter didn’t work, so instead, through the medium of my ears I compared the results with my iPod. The result? Although there was noticeable hiss when I started the tape, once the music began, actually the (nearly 25 year old) tape sounded… just great. No hiss once the music began. Warm and fat? It was certainly no worse than the MP3 file. It took me back to listening to music on holiday on the beach or by the pool.  The physical product is still fun. I’m not sure it is going to be able to claw back market share from MP3 players – that boat has sailed, and I prefer vinyl. But as something fun?

In the meantime, here’s a trailer for an interesting looking documentary about the cassette tape by two guys called Zack Taylor and Seth Smoot who raised the money for this on Kickstarter:

“No longer the inadequate, younger sibling of vinyl and CD, the humble cassette has been making a resurgence. International Cassette Store Day 2013 is a celebration of a physical product that is accessible, fun, cheap and still going strong in the turbulent current musical climate.”  Quote from the organisers of Cassette Store Day on their website.

* There is of course no such thing.