The Day I Appeared In An AC/DC Video 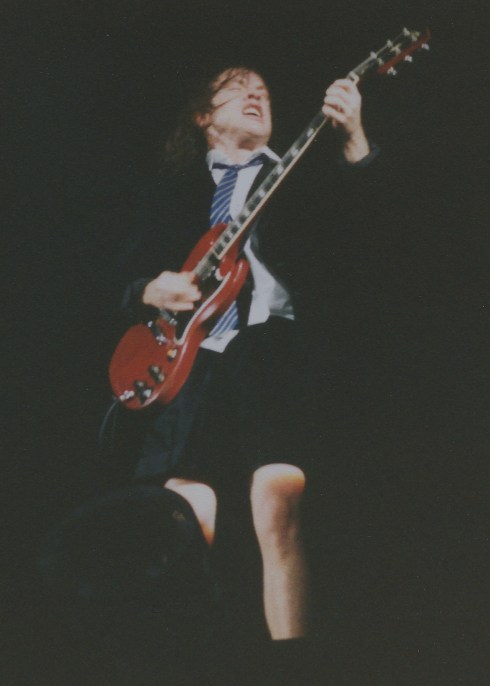 Ask a teenager now if they would stay up all night to watch TV on the off chance of seeing one of their favourite bands’ music videos and you’ll probably get as baffled a look as the one that Wayne Rooney might give you were you to ask him a tricky question such as “What day is it?”

In 1986, seeing a rock music video on British TV was as rare as seeing a hen’s dentist. Now, nearly thirty years later, YouTube has made British TV’s recalcitrant attitude to playing rock music somewhat redundant. This is great, yet rather galling. I spent hours recording highlights from “No Limits”, “The Tube” “The Word” and “The Chart Show” onto videotape, timing the release and re-application of the “pause” button with a mixture of precision and clairvoyance – a skill that only a child of the eighties will ever fully appreciate – sitting through interminable hours of Stock, Aitken and Waterman videos just to capture two minutes or so of AC/DC or twenty seconds of Metallica.

“The Chart Show” was only worth tuning into every three weeks as it alternated a Rock chart with a Dance and Indie chart.

It’s hard not to feel delighted for today’s teenagers who can access just about any video on YouTube so easily without sitting through Rick Astley’s latest single. Well, perhaps “delighted” is the wrong word. I just hope they don’t all choke on their iPhones.

All of which explains why I had to wait a long time to see the one video that I actually appeared in. When I say “a long time”, I’m not kidding: it was a Seventeen Year wait. It was so long, My Bloody Valentine released two albums and flared trousers went in, then out, and then back into fashion whilst I was waiting. Although filmed in 1988, it wasn’t until 2005 that I discovered it was available – on the “Family Jewels” DVD which I ordered on Amazon.* I poured myself a glass, settled down and turned on the DVD player…. 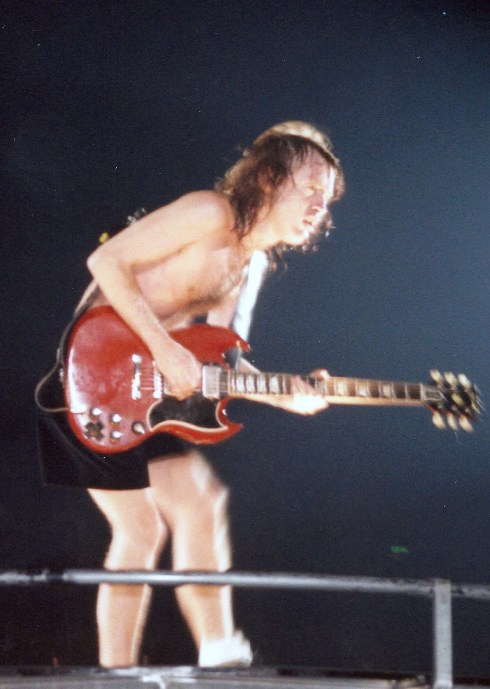 But we are getting ahead of ourselves here. “How..” I hear you say “did you get to appear in an AC/DC video?

Twenty five years ago in March 1988 AC/DC played Wembley Arena in support of their Blow Up Your Video album. You may remember the one: It featured Angus dressed as a schoolboy on the cover. Not narrowing it down? OK, “Heatseeker” was the lead single, and “That’s The Way I Wanna Rock n Roll” the follow up. At the front of the queue someone handed me a flyer. It read: “Want to appear in an AC/DC video? 10am Sunday morning, Wembley Arena”. That was tomorrow. I was going to see the band for the second time anyway. Not seeing one of my favourite bands for free was as likely as John Prescott passing up a free pie and chips. I was 17 years old, so would obviously have had a packed weekend ahead of me, but after a call to my secretary** I managed to free up some time, cancelling some “hanging around with friends” or possibly “going to the video rental shop“.

I mused over the role I might play in the video. A young roadie perhaps? Maybe there would be some attractive girls there? Then I remembered this was an AC/DC video. I’d be in a crowd scene, whilst the band played onstage – just like the previous fifteen videos. And attractive girls? Well – there might always be a first time in an AC/DC video, but I wasn’t going to hold my breath. They weren’t that kind of band.

Sure enough, as we were let into the UK’s leading cavern of bad acoustics – or Wembley Arena as it is otherwise known – it was clear that I, and the two hundred or so others in the queue were to be members of the crowd.

But there was an unexpected twist to this video. Not in a “Sixth Sense”, “he’s already dead” kind of twist, but as they let us in, the film crew handed out what is now a very special bit of memorabilia for me: a lifesize cardboard replica of Angus Young‘s Gibson SG guitar.

We were to be in the crowd as the band played second single “That’s The Way I Wanna Rock n Roll” onstage. I had a front row position. The director told the audience to bang their heads and generally jump up and down. A bit self-conscious about head banging on TV in case my mum (or worse, my friends) should see me making a fool of myself on Top of the Pops, I told myself that just waving the cardboard guitar around would suffice. The band came onstage and mimed to the song a few times as the cameras joined them on stage and zoomed into the crowd’s faces. Then – because the cardboard guitars were only printed on one side – we were asked to turn our guitars around as the cameras then filmed from behind the crowd. That’s the magic of Hollywood, folks.

After filming, Brian Johnson and Angus Young stayed behind for a while to chat with fans and sign the cardboard guitars. I got mine signed by Angus before I was ushered out by the venue staff.

I kept the guitar safe by travelling on tube and train an hour an a half back home, no doubt catching a few strange looks from people wandering why anyone would be carrying a cardboard replica of a guitar. I left it carefully at home and then travelled back on the train to watch the evening’s gig.

I couldn’t wait to see myself waving in the video and tuned in to Top of the Pops when the single charted. Sadly, this was the most ill-judged display of optimism and over-confidence since Goliath looked at the boy David, turned around, shook his backside whilst blowing a raspberry and said “Let’s be having you, sling-boy!”

There was more chance of a library being named after George W Bush than TOTP playing an AC/DC video***, and that was that…my chance of seeing myself on TV had gone.

Having shelled out fifteen quid on the DVD, I wondered what I would look like as an eighteen year old on TV. I pressed “play”.

The video wasn’t terrible… The plot, such that it is, consists of a bunch of kids who want to go to an AC/DC show, and Angus appears magically out of a poster with a bit of camera trickery and goes on to play a show, taking the kids with him. Being the days before CGI, this “magic poster” was clearly an expensive special effect. I believe it was first seen in Buster Keaton films – when it was achieved by throwing a dummy off a building, stopping the camera, laying an actor on the floor in place of the dummy, restarting the camera and letting the actor get up and dust himself down.

That was about it, plot-wise. But no worries – I wasn’t expecting Citizen Kane. I was more interested in the crowd shots. There my eighteen year old self would be, front and centre.

I watched, entranced, as the kids in the video all appeared in front of the Birmingham N.E.C. waiting to see the AC/DC show.

It was at this point that I started to worry. The N.E.C? The band came onstage. At the N.E.C. The crowd were going wild. At the N.E.C. It was all at the N.E.C. In Birmingham. Where was all the Wembley Arena footage? I had waited seventeen years…for this? Where was my stupid face?

For seventeen years I had laboured under the impression I was in an AC/DC video, and it turned out I had been left on the cutting room floor. I couldn’t believe it.

Ah well, I reflected. Perhaps it was just as well. I never had a great look at eighteen. But I still had that cardboard guitar, signed by Angus Young…

* If I had spoken of having a DVD from Amazon in 1988 people would have thought I had a tropical disease.

*** Or so you’d think, anyway. Who says Americans have no sense of irony…?

*** I did a bit of internet research into this: it turned out that there had been another similar shoot at the N.E.C. a few days earlier – it looks like this footage was preferred.

Oh, and yes – the photos on this page are from a later tour….