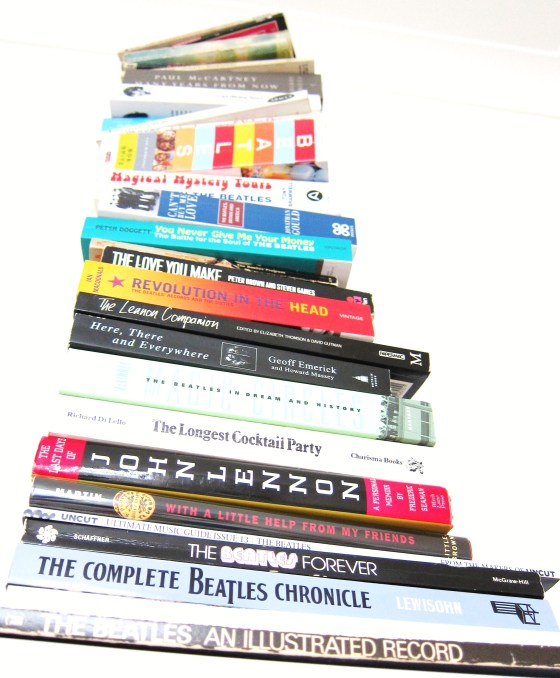 Want to know which are the best Beatles Books?

With the release of the first part of Mark Lewisohn‘s trilogy of books on the Beatles “Tune In” I thought it might be worthwhile taking a look at the plethora of Beatles Books out there to try to make sense of it all. I have already read far more books about the fab four than is healthy. I’m beginning to pluck obscure facts out of the air. Paul McCartney’s middle name? * Not a problem. The name of the club where Paul first met Linda? ** Easy. Who was playing a live set at the time?*** Child’s play. Of course, this is also extremely sad, and means I run the risk of turning into the most frightful bore at parties. It’s not a skill to publicise too heavily.

Does the world really need another book about The Beatles?

The answer to this question is of course “Yes” – especially if the author in question is perhaps the world’s foremost Beatles expert, Mark Lewisohn, a man whose knowledge of The Beatles is what the inventor of the word “Encyclopaedic” had in mind when he came up with it. His previous books “The Complete Beatles Live” and “Complete Beatles Recording Sessions” are already the go-to books for facts and figures, detailing in diary fashion what happened to The Beatles on just about every single day of the sixties. That attention to detail is the books’ strength and also their weakness, as they are better suited to dipping in and out of rather than reading from cover to cover. That’s why the trilogy is welcome. We get all the comprehensiveness that is Lewisohn’s trademark, only with a more reader-friendly writing style.

Another reason why more Beatles books is a generally good thing is that the quality of said books is improving as the years go by.

But how do we separate the wheat from the chaff? Or, the “Piggies” from the “Day In The Life”? I hear you cry. **** Never fear, and worry not. Not only am I going to give you a top ten list, but on a new permanent feature of the Every Record Tells A Story site I am also going to chuck in a list of other noteworthy Beatles-related reads – because let’s face it – no-one is going to agree on a top ten list, but if I include thirty, then the chances are your favourite is going to be in there somewhere. If it isn’t, then I congratulate you on finding a hidden gem, or chide you for wasting your time on something obviously sub-standard.

Completists and enthusiasts can read the full list of Greatest Beatles Books by clicking on this fab link, but for those otherwise reasonable folk who might feel that even ten books about the Fab Four might be nine too many, here’s a top ten which I hope will inspire you to read a little deeper into this most fascinating tale of how four young men from Liverpool became even more famous than Ken Dodd‘s Diddy Men. Split into different parts of The Beatles’ lives and careers (to justify why you need more than one book), here’s the Top Ten Greatest Beatles Books:

The One About The Songs:

Revolution In The Head, Ian McDonald

A classic of its kind, McDonald dissects every Beatles tune, providing a personal view of every one, and in many cases the background to each.

The One That Was The First Really Comprehensive Life Story of The Band:

The first attempt at a full career biography that really achieved a level of comprehensiveness befitting the band. A classic, written a decade after the band split and released less than a year after Lennon’s murder.

The One About Paul:

Many Years From Now, Barry Miles

This book was written with the full cooperation of Paul McCartney, so has the advantages and disadvantages of being “official”. What is of particular interest is reading how Paul developed his interests in the counter culture through the Indica Gallery and bookshop. We learn that it was McCartney rather than Lennon who initially showed more interest in the various causes and movements of sixties popular culture.

Magical Mystery Tours: My Life With The Beatles, Tony Bramwell

A childhood friend of George, Tony Bramwell got the job of Roadie to The Beatles by offering to carry George’s guitar into a hall so he could get in for free. His book is both highly detailed, appears factually strong and is page-turningly readable.

The One About The Recording Of The Beatles’ Records:

Here, There and Everywhere: My Life Recording the Music of The Beatles, Geoff Emerick

Geoff’s account of his time as an EMI engineer – during which he was effectively George Martin’s right hand man – is very readable, often funny and occasionally scathing (especially of George Harrison’s early prowess and George Martin’s claims to the credit for some of The Beatles’ best studio moments).

The One About The Apple Years:

Consistently amusing account of the last days of Apple by the”House Hippie”. The Beatles are a mere side attraction compared with the arrivals of Allen Klein, Magic Alex…and Hells Angels.

The One With The Interview John Gave After He Quit The Beatles:

Just a brilliant explosion of John Lennon‘s thoughts and feelings as he looks back on his time with The Beatles. Endlessly quotable – this is the moment Lennon lifted the veil and gave a shocking and honest account of his life.

The One About John’s Days In New York:

Beginning with the story of his own arrest with threatening behaviour from New York City cops, Frederic Seaman – who for a time was Lennon’s assistant in New York – gives a serious account of his time with Lennon. An insight into Ono’s protection of Lennon and the level of (often justified) paranoia and suspicion prevailing over the period. Interestingly, Alex Constantine (in his book “The Covert War Against Rock” – see main feature) alleges that Seaman was part of a project to destabilise Lennon. Either way – it’s a very interesting account.

The One About How And Why The Beatles Broke Up:

You Never Give Me Your Money, Peter Doggett

Doggett achieved something extraordinary with this book – fresh perspective on how and why the Beatles split up in an entertaining and readable account of the last year of The Beatles – and the tangles between John, Paul and Allen Klein.

The One You Don’t Want To Drop On Your Foot:

I think everyone else can put their pens down now. Lewisohn’s got it covered, with fresh perspectives and sources. The first part of the trilogy spans over 1700 pages and only gets to 1962. Let’s hope we (and Lewisohn!) all live long enough to read parts two and three…!

So there’s the Top Ten Best Books About The Beatles for you. For the big Beatles fans out there, there’s an extended version in the Best Beatles Books page on the site – and do let me know if you think I have missed out your favourite.

Mark Lewisohn’s unexpurgated version of Tune In is out now.

Like Loading...
‹ Poll Results Are In! Rock Is Sexist, The Videos Are Terrible, But We Love The Singers…
The Top Ten Greatest Double Live Albums ›