Home › Indie › Are You A Music Obsessive? Check This Scientific Test: Plus A 2013 Mixtape

Are You A Music Obsessive? Check This Scientific Test: Plus A 2013 Mixtape 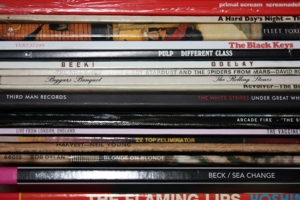 How much of a music fan are you? You may be pretty keen, but just how keen? I remember many years ago someone called Danny Baker’s radio show to say he had regularly sorted through Paul McCartney’s bins and pulled out a Christmas card from one of the other Beatles. What was interesting about that, aside from the sheer gumption and mild insanity of the man, was that McCartney had thrown the card out even before Christmas Day, suggesting perhaps that relations were frosty with the sender at that point in time…
Clearly I don’t condone such behaviour, but what you may not know is that there is now a way of measuring and monitoring your interest in music. Until now, we have had to make do with being reassured by reading of other people’s obsessions. “I might be a bit over the top” I think to myself whilst scrolling through my 200GB iTunes collection “but I am no way as bad as that guy…”.
The good news is that things have moved forward. I recently discovered * a little known but properly scientifically researched ** way to measure a person’s obsession in music which covers every level of fandom from “Not at all interested” to “Sad obsessed music blogger”, to “they’re in my hotel room, please call security”.
I’m glad I don’t know any of the music bloggers: they must be soooo dull. *Eric Morecambe look to camera*
I thought you might be interested in the research. The deranged fan scale is known as the Mills Scale. Interestingly, each unit of measurement of deranged fandom is known as a “Heather”.
Here’s the Mills Scale and the various measurements: Remember, this is highly scientific…

a) Toenail
b) Half eaten sandwich
c) Cigarette end

any of which odious articles may once have belonged to star in question and which are now kept under pillow. If female, writes own first name alongside surname of favourite pop star “just to see what it would look like”. Friends have started moving sharp objects out of the way “just in case”. Tweets ludicrously over-the-top death threats to newspaper columnists who make mildly negative comments.

So there you have it. Let’s hope the Mills Scale helps people recognise whether they need to seek help…
On a completely unrelated matter, one of my friends, who may or may not score quite highly on the Mills Scale, (but who does not – as far as I know – own any toenails that once belonged to a musician) made a mixtape containing his favourite tracks of 2013 for a dozen or so people, including me. It was beautifully put together.
I know 2013 was, oh, ages ago and everyone is moving on to all the new 2014 stuff, but sometimes it is worth taking a breath, pausing, and reflecting on life. This is one of those times.
I shan’t risk embarrassing him by publicly naming him, especially as he’s gone on holiday and doesn’t know I’m writing this, but it was so good, I thought I would share it with readers of Every Record Tells A Story by recreating it on a Spotify playlist.
I say “a mixtape”; it was actually a four-CD musical odyssey crafted with precision over a five week period, complete with liner notes and with serious consideration given to the flow of tracks. Each CD was given a theme, including a “late night” chilled selection, a more danceable collection, a “riffs, beeps and beats” series and the one on the playlist below which has the theme of “Boys and Girls With Guitars”. I think Kevin Shields of My Bloody Valentine will have agonised less over his last album.
All this leads me to the conclusion that my friend is either a genius, or has a) a brilliant obsession with new music and b) far too much time on his hands. Let’s go with “Genius” in the absence of evidence to the contrary.
I can take no credit for the way this has been put together, but can’t think of a better way to sample a huge selection of some of last year’s best tunes, particularly those that are a little off the beaten track, so I hope you will subscribe to the playlist and enjoy. Note however that because of Spotify not quite having everything, there are two missing tracks: London Grammar’s Wasting My Young Years should come in after British Sea Power and Michael Head and the Red Elastic Band’s *** “New by Street” should come in after Vampire Weekend. My friend won’t approve, as it might spoil the carefully chosen flow of his playlist, but I think it works anyway. I defy anyone to listen to this a couple of times and not want to investigate some of these bands further.
Please enjoy – and remember, there’s always someone more obsessed than you…****

Playlist: 2013 – Girls and Boys With Guitars

Like Loading...
‹ Michael Katon, a UK Tour, Two Letters and a Special Cat
In Praise of Muddy Waters – Live At Newport ›