The Best Records of 2014 so far #3: Elbow – The Take Off And Landing Of Everything

Guy Garvey of Elbow at The Isle of Wight Festival

You probably want to know about Elbow’s latest release, so here’s a review:

Well, you didn’t think I was talking about the new album did you? When there’s a new beer, Elbow’s “Charge”, to be tasted? 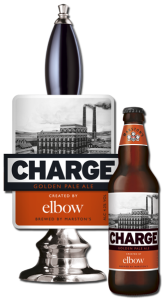 In an inspired piece of marketing, fans of beer and indie music (and that’s the entire population of the world, right?) were able to sample both beer and album prior to the official 10th March launch for a couple of days at selected pubs up and down the country.

Which is why I found myself in a pub on a Thursday lunchtime. A dirty job, and all purely in the interests of research, honest…

Formed in Bury in 1990, Elbow released their Mercury Prize nominated debut album eleven years later in 2001 – and since then has slowly become something of a national treasure in the UK, yet not exactly a household name anywhere else. It has got to the point that, according to recent research* 38% of Olympic gold medal montages now feature anthem “On A Day Like This” (with the rest featuring Shed Seven’s “Going For Gold”).

This may be due to a decision the band made after the success of the brilliant, Mercury Prize winning album “The Seldom Seen Kid” in 2008. According to Garvey, Elbow sat down together and discussed whether the next album should be deliberately more commercial. They decided against it. The result was the slightly underwhelming (for my tastes) “Build A Rocket Boys” released in 2011. Although the album may have lacked a bit of fizz and bite, the accompanying beer was tasty, and in any event it was good that the band didn’t start watering down what was special about them at the first sniff of a pot of gold.

But if the last album failed to ignite my interest, then my patience has been rewarded with new album “The Take Off And Landing Of Everything”, which has achieved an unprecedented double of being a great album and beer. Lead single “New York Morning” with its line “Oh my giddy aunt New York can talk / It’s the modern Rome / and folk are nice to Yoko” has elicited a touching acknowledgement from Yoko Ono, who appeared pleased with the reference. “Charge” sounds like early Genesis (in a good way – and I’m not sure I ever thought I would ever write that sentence), and “My Sad Captains” is an immediate and uplifting anthem to drinking chums which is going to go down a storm when Elbow play a sell-out O2 Arena in May.

“The Take Off And Landing Of Everything” is a really strong album (I haven’t even mentioned the fantastic title track) and Guy Garvey’s voice is amazing live, as I can testify having seen the band at the Isle of Wight festival a couple of years ago. Take a listen to “New York Morning” here: