“So Now You Know” is the second track to be revealed from The Horrors’ fourth album “Luminous” which is out on May 5th. Whilst the first preview from the album “I See You” was a seven and a half minute epic awash with atmospheric synth work from Tom Cowan alongside singer Faris Badawan’s trademark vocals, “So Now You Know” feels more like a natural successor to “Still Life” – the hit single from previous Horrors album “Skying”. There’s even a hint of a guitar sound from Bowie’s “Heroes” in there. 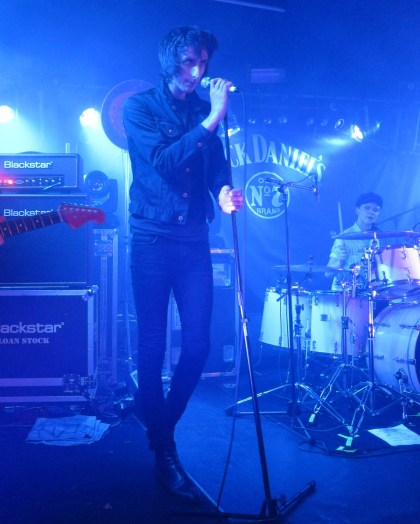 The Horrors emerged from Southend on Sea in 2005 and are now one of the UK’s most distinctive bands. Much of this is down to the mix of strong personalities within the band. These include Josh Heyward, whose sonic wizardry is generated from a guitar effects board larger and more diverse than the list of people who want to smack Justin Bieber in the face.* Heyward is an interesting and highly original guitar player, taking his cue, perhaps, from My Bloody Valentine’s love of harnessing sound through a myriad of effects pedals.

Meanwhile, “Bez on a Bass” (my description) Rhys Webb’s rhythms suggest a love of Madchester bands, and adds bounce to the mix. With the aforementioned Tom Cowan’s keyboard flourishes – which carry sounds associated with the sort of eighties bands that wore a lot of black eye make up back in the day – and former St Martins College student Faris Badawan’s distinctive snarl and stage presence, you have the start of a decent band. Compare those descriptions to your average band (“the cute one”, “the quiet one”, “the one in the hat”) and you can see why The Horrors have a good deal more about them than most. That they can write some decent songs (enough for “Skying” to win an NME Award for best album) is all grist to the mill.

“Skying” was one of my favourite albums of the last few years, blending as it did Heyward’s expansive riffs with that danceable rhythm section. Both new songs are an evolution of that sound, with perhaps the atmospherics coming more to the fore. Hey, you don’t need me to explain it – you can listen to both tracks here:

The band will sign all pre-orders of Luminous bought via their website, which is nice of them. There’s a deluxe copy of the LP in heavyweight vinyl and gatefold sleeve, alongside the usual standard CD and vinyl formats. All pre-orders come with an instant download of “I See You”.

* Legal note: Every Record Tells A Story does not condone violence or smacking people in the face – even Bieber. Unless you are carrying a comically large fish, Monty Python-style – in which case go right ahead.

Tags: Faris Badawan, I See You, Josh Heyward, Luminous, So Now You Know, The Horrors, YouTube