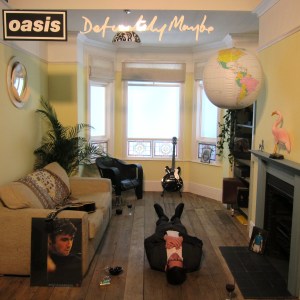 On my way to Chasing The Sun: Oasis 1993-1997, a new exhibition in Shoreditch, I attempted to picture what might be in store.

Might the visitor enter somehow slowly walking down a hall, faster than a cannonball? Preserved carefully under a glass case, perhaps the visitor might examine the sight of one of the Gallagher brothers’ monobrows. Elsewhere, perhaps that famous Union Jack dress that Liam wore at The Brits. (Oh, hang on – that wasn’t him was it?). Bowie’s exhibition last year famously displayed his “coke spoon”. Might the Oasis version have a “coke shovel”?

Alas none of these artefacts were on display, but instead there is Noel’s Union Jack Epiphone Sheraton from the (What’s The Story) Morning Glory tour, Liam’s splendid white parka coat worn at Glastonbury, and Alan White’s less splendid drum kit.

Best of all, however is a full sized replica of the room that featured on the cover of Definitely Maybe. The cover was shot in the front room of rhythm guitarist Paul “Bonehead” Arthurs’ home at the time, and the band famously filled it with references to their favourite things, including Burt Bacharach, photos of footballers George Best and Rodney Marsh plus er, a pink flamingo. What is neat about this is that you can come with four of your friends, sit yourselves in the same positions as the band and recreate the cover art. 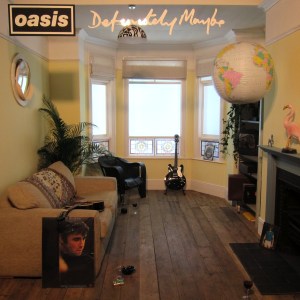 Yes, of course I did. But you’re not seeing the photos…

Principally, however, this is a photographic exhibition, featuring early and iconic photos taken by a number of photographers, including Kevin Cummins, Paul Slattery, Jill Furminovsky, Tom Sheehan and Jamie Fry.

Alongside some memorable images (The band resembling tourists on their first and rather ill-fated first trip to New York, Liam walking around San Francisco, the Gallagher’s at Maine Road, around Manchester and at Glastonbury and Knebworth) are each photographer’s memories of working with the band. As Paul Slattery says, “In 2008 I published my book of Oasis photographs “Oasis – A Year On The Road”. In retrospect I think I should have called it “Oasis – How Did I Survive A Year On The Road?”” 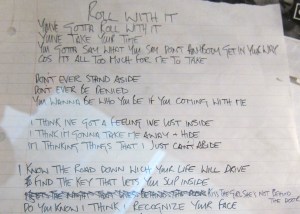 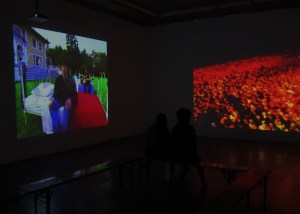 It’s an evocative exhibition, and takes the visitor back in time twenty years. The photos are great and entry is free. The downside? It’s only open until the 22nd of May, so be quick.

Curated by renowned photographer Lawrence Watson, Chasing The Sun 1993-1997 debuted in London in 2014, attracting over 40,000 visitors in 10 days and receiving plaudits from press and fans alike. The exhibition then toured to Tokyo, and now, with the Manchester edition, the show comes home to where the story of Oasis began.

The Manchester incarnation of the exhibition has been extended making it bigger and better than ever before, with additional rare and iconic content artefacts and photographs. It also features a life-size recreation of the front room in which the iconic artwork for ‘Definitely Maybe’ was photographed and a display featuring many of the original props.

The exhibition will be open daily from noon to 7pm, with the exception on Sundays when doors will close at 6pm. Admission free. More information: https://Oasis.lnk.to/exhibition