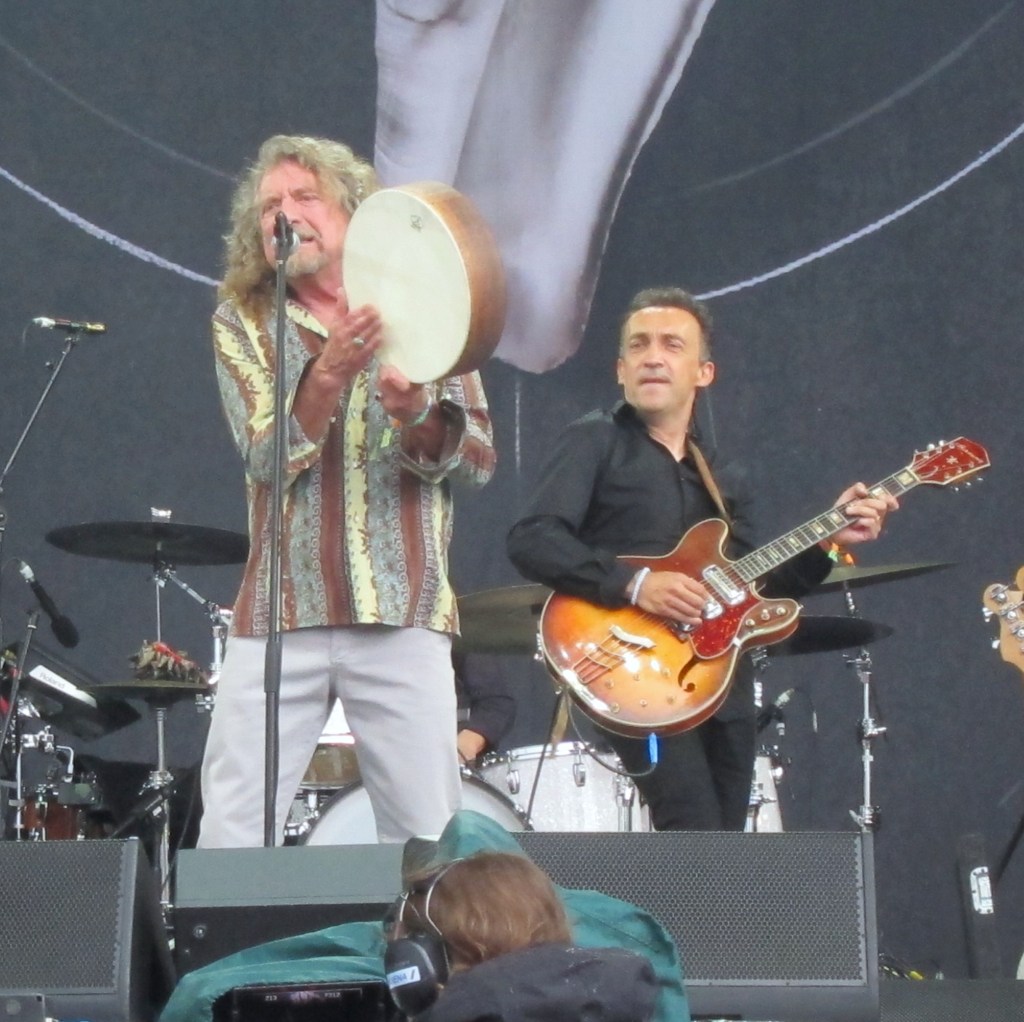 It’s possibly the nearest we’ll ever get to seeing Led Zeppelin play Glastonbury.

Greeting the crowd with “Welcome to a sojourn of Country and Eastern music” Robert Plant appeared relaxed in a trademark loose shirt. 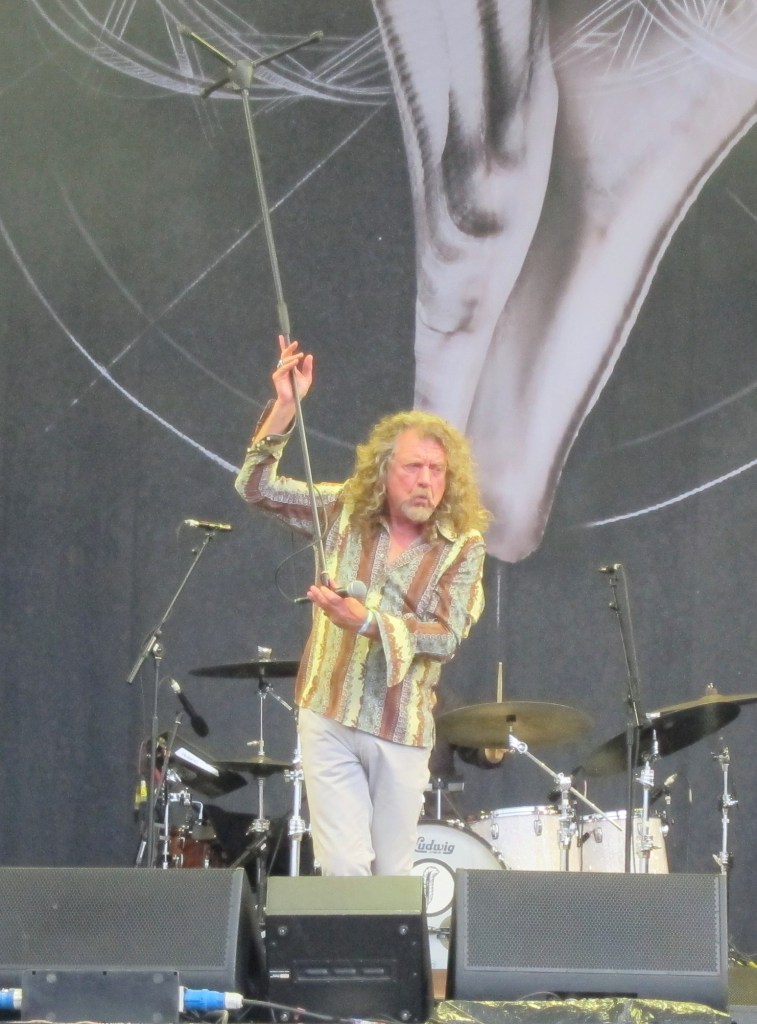 The Led Zeppelin songs Plant rolled out for his Pyramid Stage Glastonbury performance included “Babe I’m Gonna Leave You”, “Black Dog”, “What Is and What Should Never Be”, “Going To California”, “Whole Lotta Love” and “Rock n Roll”. It nearly brought a tear to the eye. 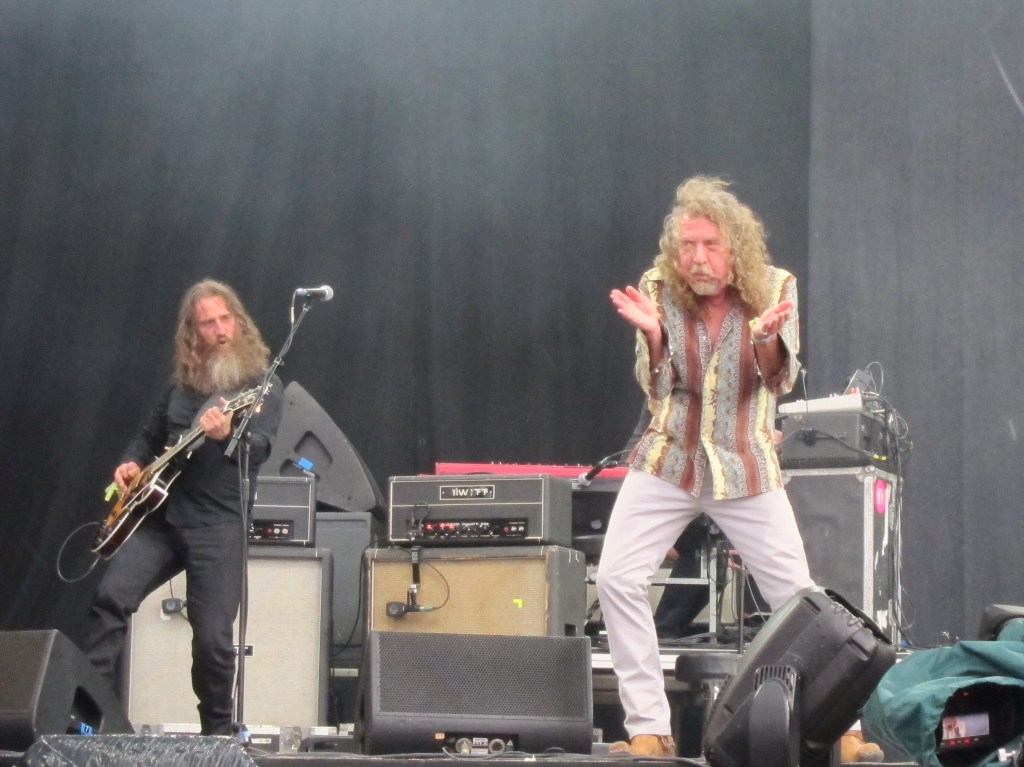 After all, instead of throwing shapes, Percy now throws withering glances at people who keep asking him about a Led Zeppelin reunion that Isn’t Going To Happen. Thankfully Page curating the Zeppelin back catalogue like an old professor in a Kashmir cardigan, has allowed Plant to plough a forward looking furrow with increasing success. 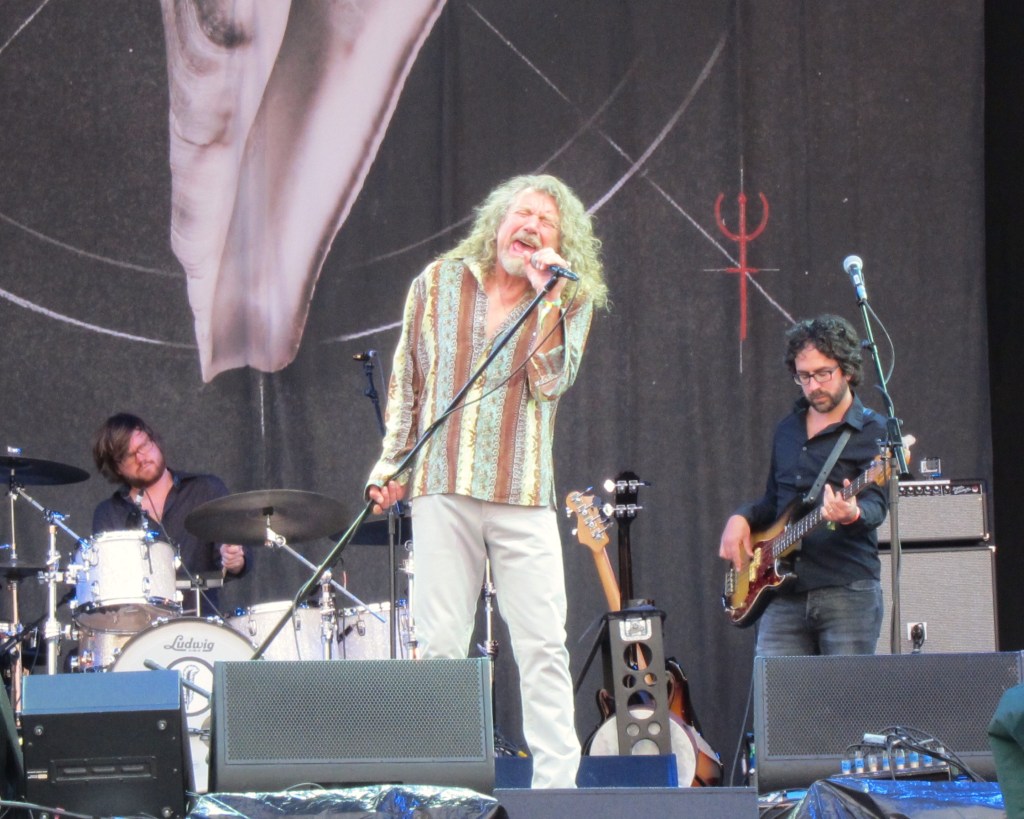 It is hard to argue against the fact that, in Raising Sands (with Alison Krauss), Mighty Re-arranger and Band of Joy, Plant has recorded his strongest trilogy of albums since those heady days in the seventies when Zeppelin toyed with audiences and mud sharks in equal measure. 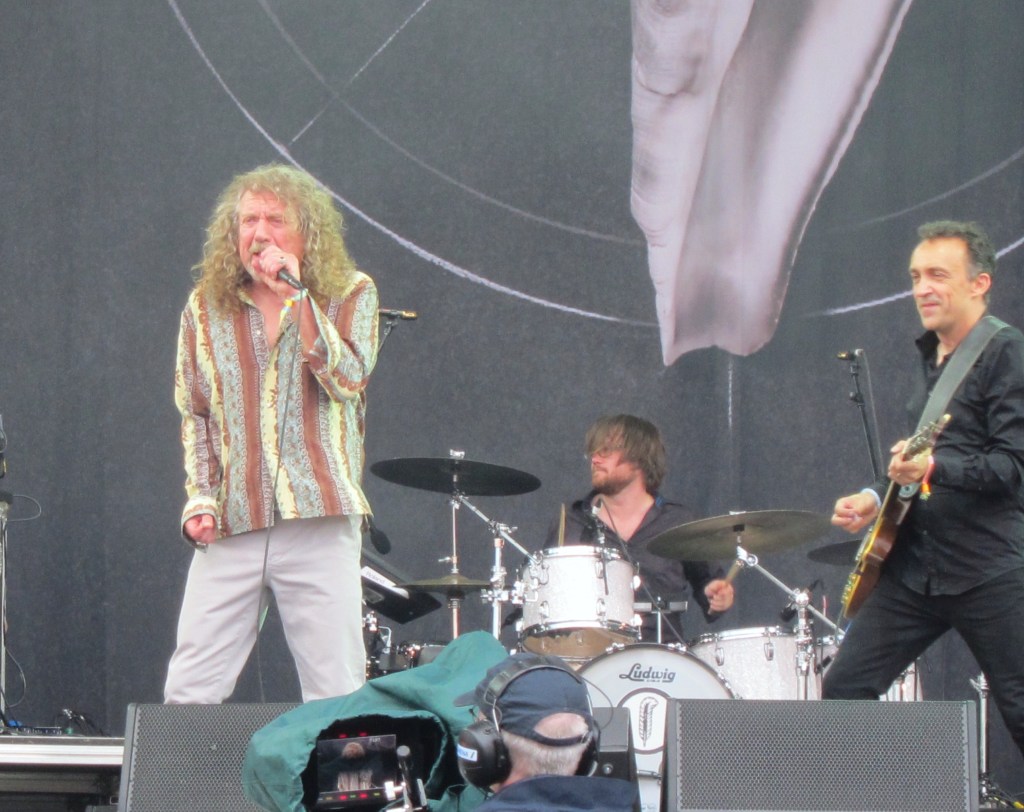 August brings another album, this time with another exotically named band, The Sensational Space Shifters, who were Plant’s band yesterday. The new songs, including “Rainbow” and “Little Maggie” were strong and confirmed this is a performer more comfortable looking forwards than backwards. 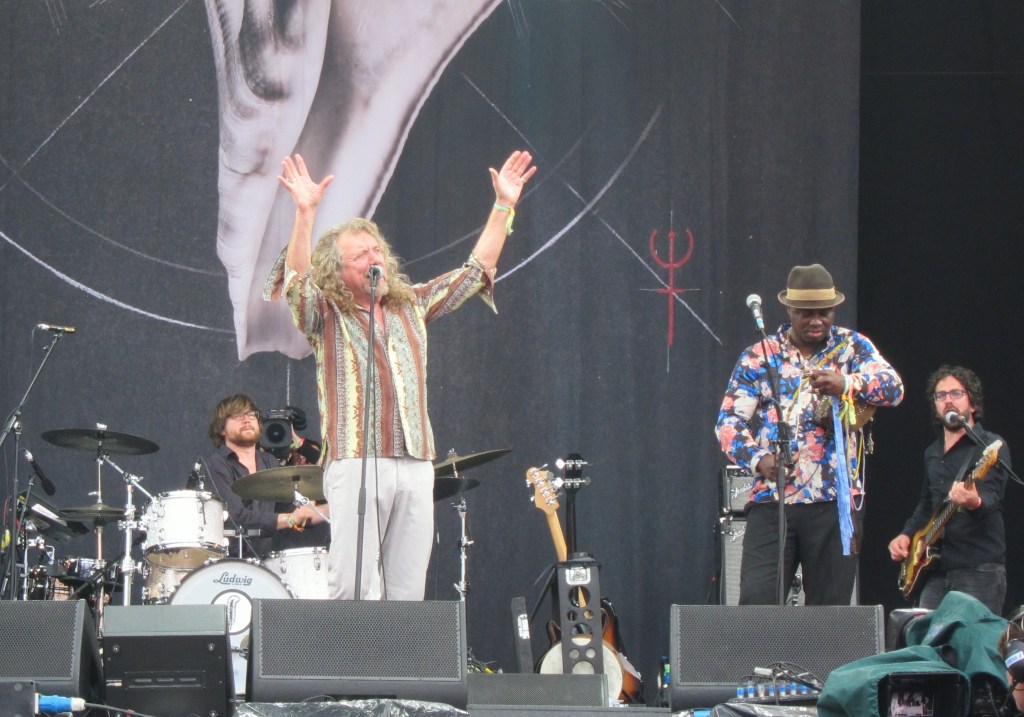 Whilst storming opener “Babe I’m Gonna Leave You” was faithful to the original, albeit with sublime Spanish guitar flourishes, Black Dog became a jam with Gambian instruments, “Whole Lotta Love” began as a call and response blues and “Rock n Roll” dispensed with the riff but kept the song.

But this aside, perhaps Plant does like to wallow in Nostalgia a little. He recalled his memories of being at the first Glastonbury in 1969, as the Pilton and Shepton Mallet Music Festival.

And it became a family affair in the end as the band’s children began to infiltrate the road crew and take turns being the guitar tech, handing out instruments and one even joining his dad onstage for a dance (his moves were better than his dad’s, for the record). 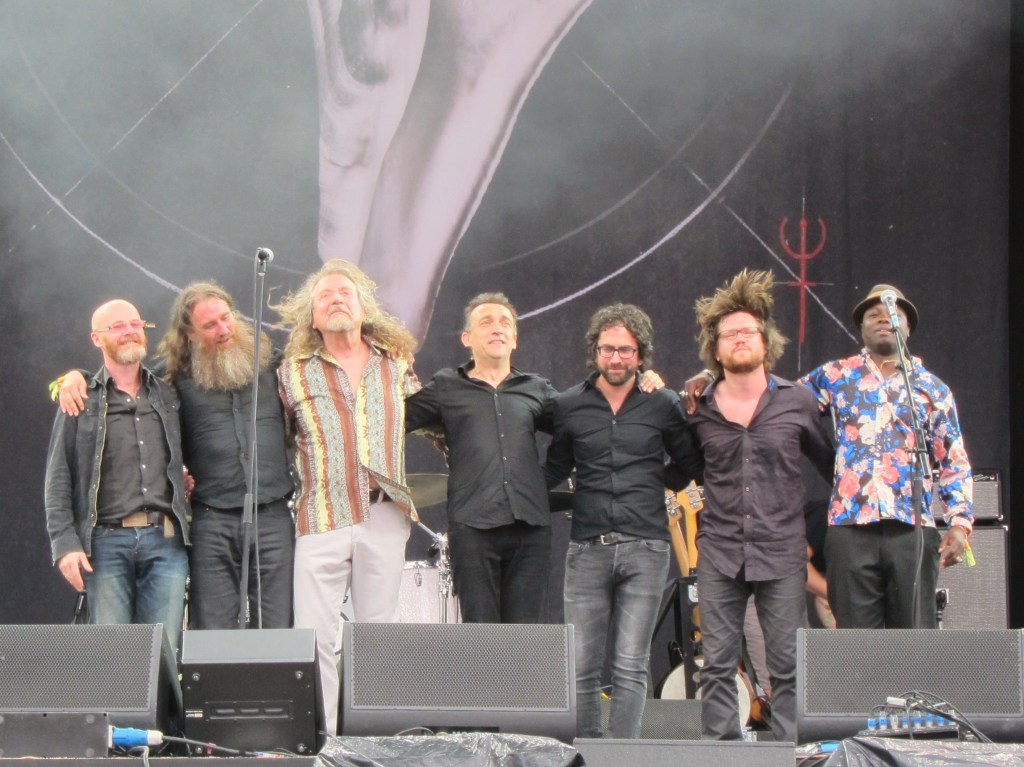 Robert Plant and the Sensational Shape Shifters left the stage to a warm and generous response. And that Led Zep reunion? There’s always next year….