A Recovering Lemmy Braves It Out As Motörhead Play Hyde Park 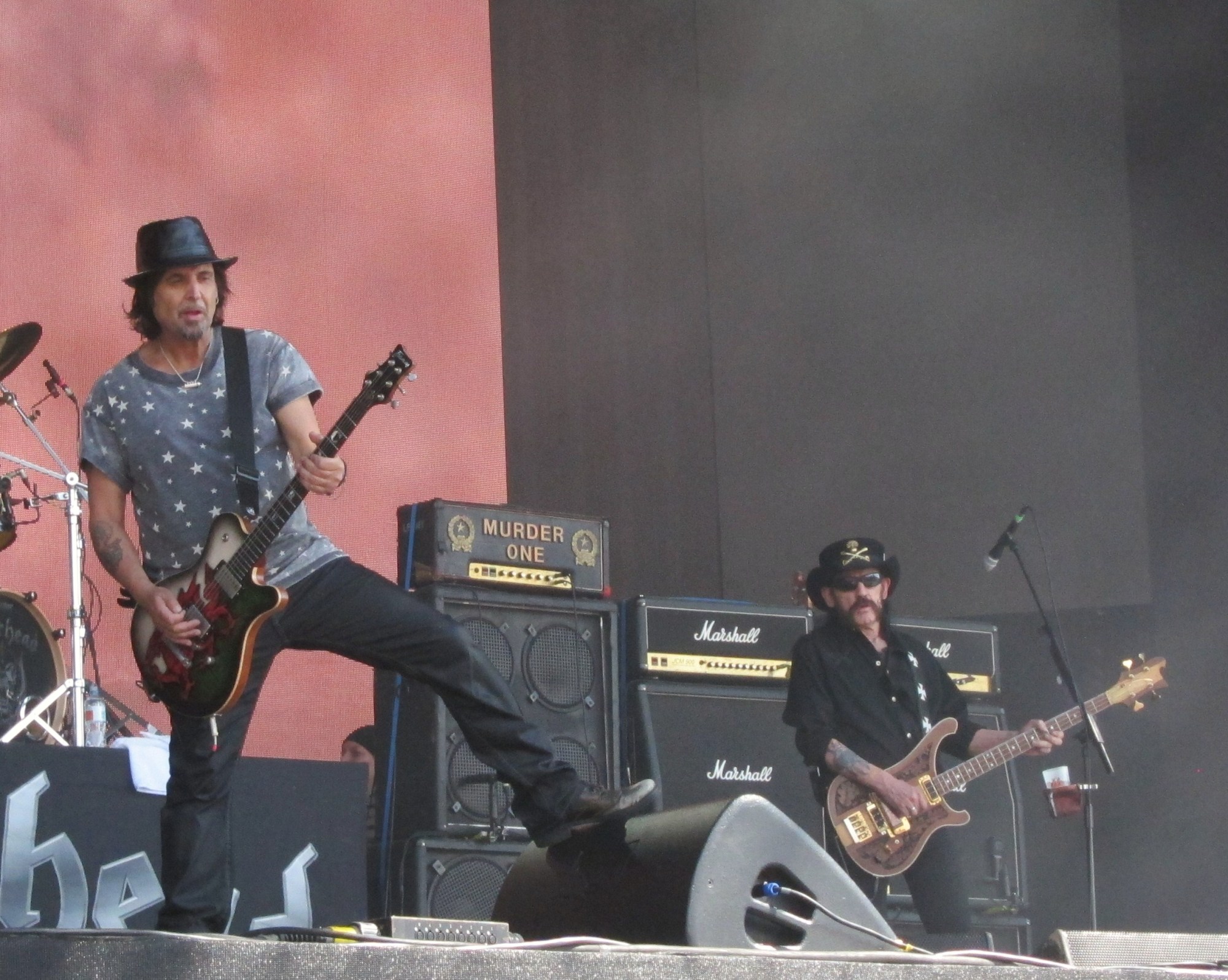 Let’s face it, even if he had lived fast and died young, he’d never have had a good looking corpse, so it’s just as well Lemmy has been as good at Grim Reaper-dodging as anyone.

Having left Hawkwind ostensibly not because of musical differences but because of drug differences (they took weed, Lemmy took speed), alongside Keith Richards, Lemmy has been at the vanguard of disproving modern medical thinking. The five-a-day pledge sounded a good idea, until Lemmy realised it related to “fruit and vegetables” rather than “bottles of Jack Daniels”. 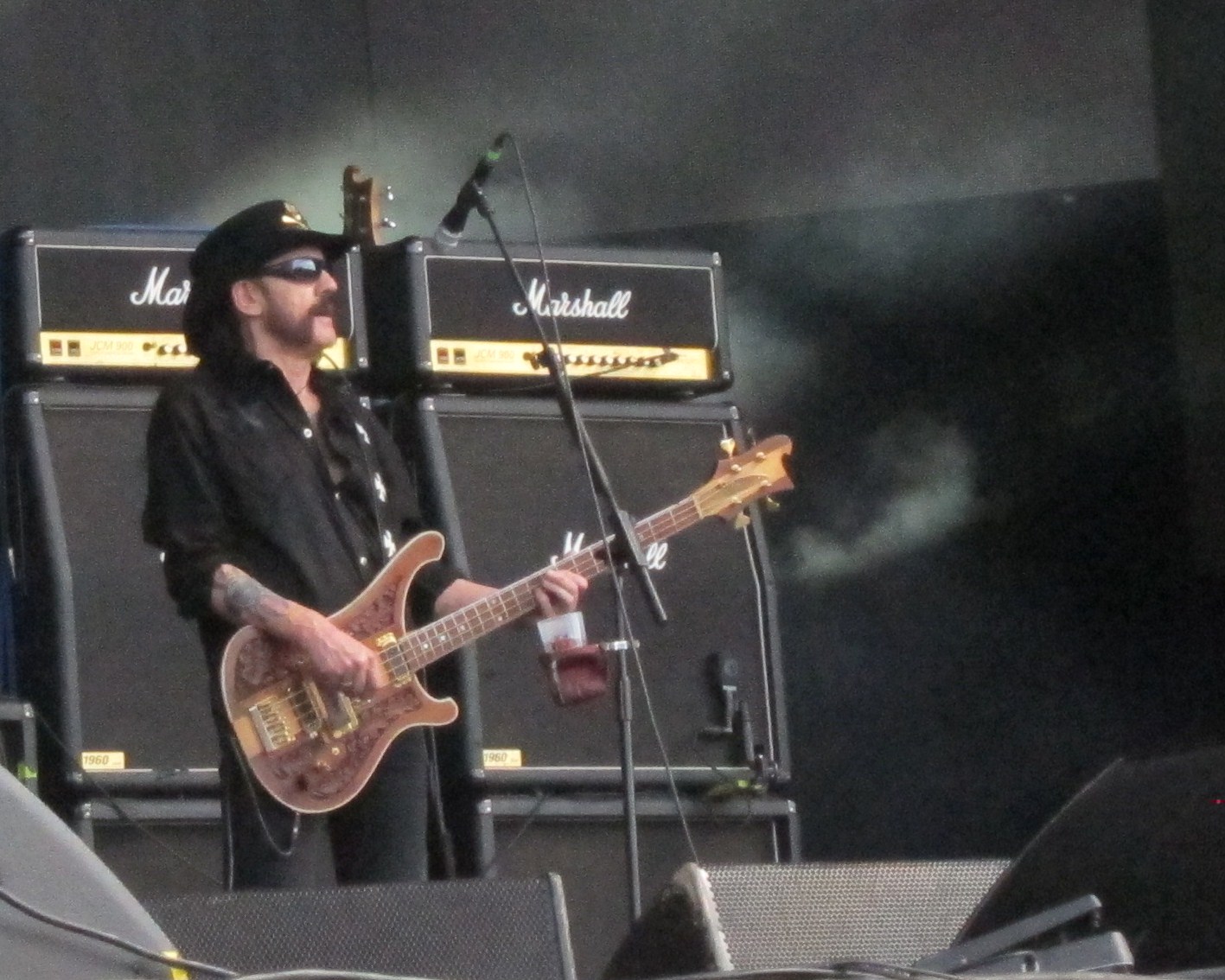 Yet, it appears that Lemmy is but a mere mortal after all, as over the past year he has sadly had to cancel shows and change the habits of a lifetime as his heart began to wear at the seams. You know how bad things have got when you are being supported in your recovery by a former member of Guns n Roses, but such was the case, according to a report in Classic Rock Magazine this week who reported Slash had been at Lemmy’s side whilst he recovered from heart-related treatment. One can only assume that the owners of Jack Daniels inc. are also greatly concerned and are wishing both men a speedy recovery.

So after all his recent health problems it was good to see Lemmy back where he belongs: onstage, with trademark Rickenbacker in hand.

Still suffering from having a microphone set too high up* , Lemmy cuts an imposing presence.

Coming on a humble fourth on the bill (in their home country? I’d have them on just before the headliners and give them something to worry about) Motörhead play songs from last year’s excellent “Aftershock” album. Indeed Motörhead are on something of a hot streak of albums in recent years, with records such as “The World Is Yours” being as strong as any in their back catalogue. 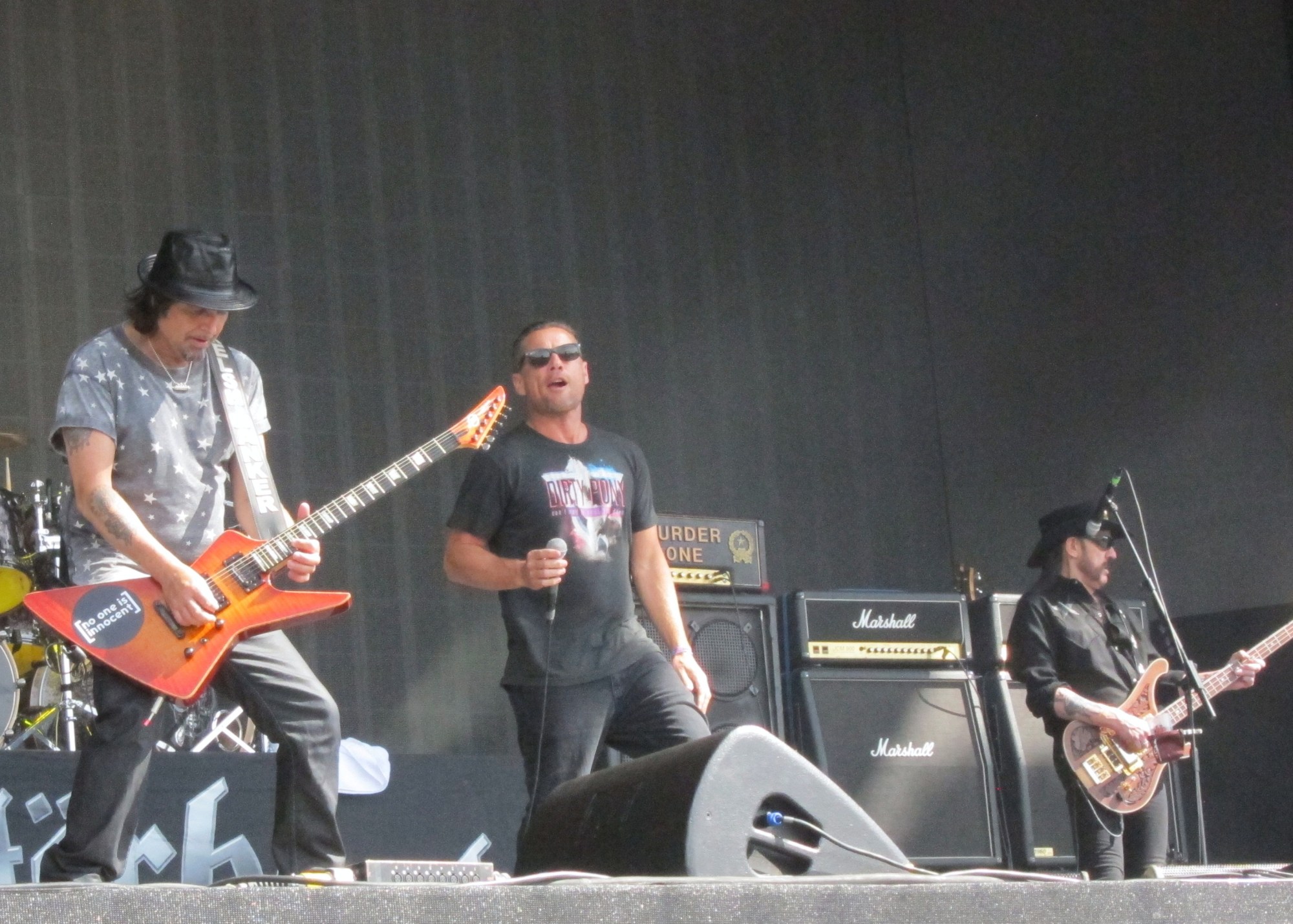 Indeed, after opening with Overkill classic “Damage Case”, “Stay Clean” and “Over The Top” Lemmy introduced “Lost Woman Blues” from Aftershock and it was as good or better than anything played to that point.
Against a background of moving tanks Lemmy looked slightly frail and tired, albeit he still possesses a stare that would stop an overbearing aunt in her tracks.
Orgasmatron’s “Doctor Rock” began the mosh pits in style. Guitarist Phil Cambpell took some of the front man duties from Lemmy, striding purposefully across the stage resplendent in a guitar strap announcing him as a “Welsh W—er”. Drummer Mikkey Dee took a brief solo before a riotous “Going To Brazil”. 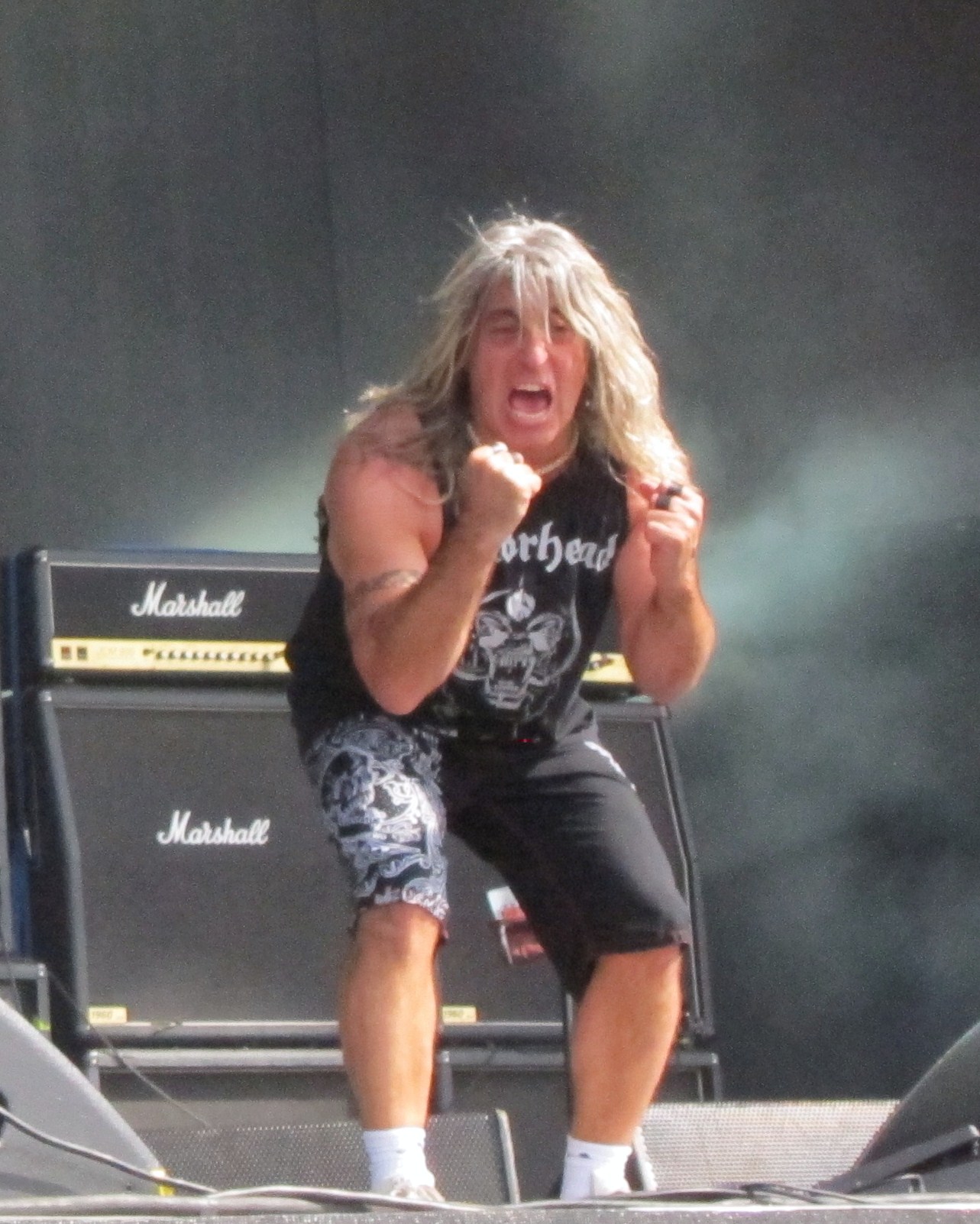 The set closed with three true Motörhead classics, “Killed By Death”, “Ace of Spades” and proto-thrash metal anthem “Overkill”, and the band milked the applause of the crowd. 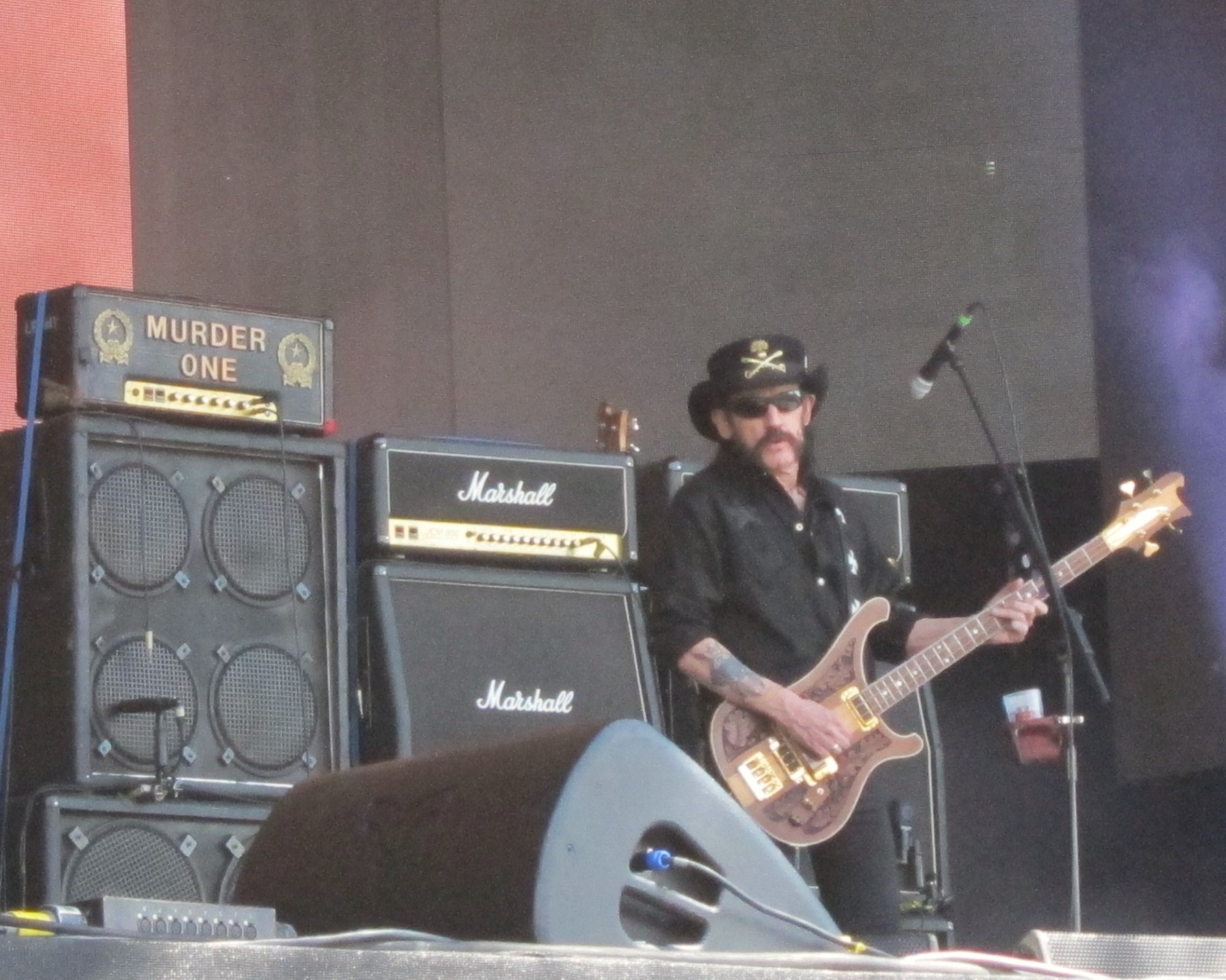 This looked like a brave performance from a not-at-100% Lemmy. One suspects that he’s not the sort of chap that will be happy in retirement, but will die with his (cowboy) boots on. Let’s hope that day is a long way off yet and his recovery continues, with or without Slash at his side…