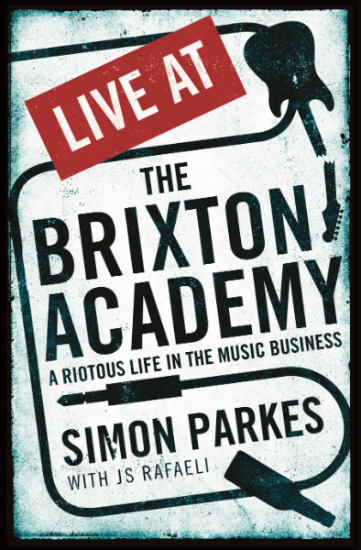 Simon Parkes’ hilarious and revealing story of The Brixton Academy tells you all you need to know about why running a music venue is not for the faint-hearted.

From an opening story involving booking a band to play the Academy using a coke dealer as a secret weapon, to being the subject of tear gas attacks, IRA bomb threats and being put on a neo-Nazi hit list for putting on reggae and Artists Against Apartheid gigs, Parkes’ tenure as owner of The Brixton Academy was seldom short of incident.

And on the lighter side of life, want to know the catering requirements on Snoop Doggy Dog and Dr Dre’s rider for the Brixton Academy in 1993? £500 worth of KFC… and they polished off the lot.

Here are five things I learned from this book, aside from “Never Run A Concert Venue”:

1. The Brixton Academy cost Parkes just £1 in 1983.
Parkes was offered the venue for £120,000 but was a sharp enough businessman to realise during negotiations that the owners (a brewery) needed to sell before they became liable for the repairs at the end of the lease fifteen years later.
He offered them £1, and a ten year exclusive beer arrangement.
They agreed.

2. The reason Brixton Academy became popular is a) the roadies love it because the back doors are only 25 feet from the stage (Wembley Arena: 50 metres) and b) the sloping floor of the auditorium makes the hall appear smaller than it really is. Standing on stage gives an optical illusion that the audience are nearer than they really are so the performers get a feeling of intimacy (and energy) unusual in a 5,000 capacity venue.

3. If you run a venue you are surrounded by crooks. The best way to handle Yardie gangsters running protection rackets and telling you they want to run your security…. is to say the current security is on a three month trial period and to ask them to forward their CVs… The resulting befuddlement might just save you from plan B: a headbut. (Parkes tried both strategies successfully).

4. When Parkes’ head of security was “pin cushioned” (beaten up with nail encrusted baseball bars) when gangsters tried to take over the venue, not only did he turn up for work the next day, he arrived with forty or so Members of an Irish “Firm” all wearing long heavy coats concealing sawn off shotguns. To a Gregory Isaacs gig.

5. Despite all this criminal behaviour, perhaps the cleverest and best scam of all was run by three lads who got into every gig – with Access All Areas passes and thus watching from the side of the stage – for free. They did this by pretending to be working for the sound desk company for whichever PA was being used, and turning up in lab coats, pretending to monitor how the system performed. They turned out to be a lawyer, an accountant and an estate agent – and big music fans…

Parkes sold The Brixton Academy to Break for the Border in 1997 for £2.5m. They liked the venue so much they renamed themselves The Academy Music Group.