Home › Music › David Bowie and The Man Who Sold The World

David Bowie and The Man Who Sold The World 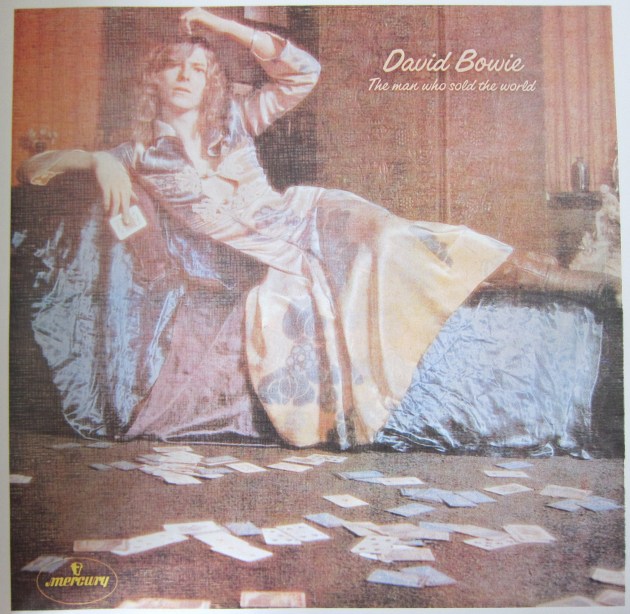 The story so far: I have bet my friend Chris that I can buy a full set of Bowie‘s albums (in their original vinyl and in excellent condition with all the inserts) from The Man Who Sold The World to Scary Monsters (and Super Creeps). That’s fourteen albums in fourteen days. Total budget: £100. The loser has a heavy penalty: to buy drinks – and wear a Westlife T-shirt for a day.

I called Chris to discuss Bowie’s first album of the seventies – “The Man Who Sold The World”.

Chris sounded amused, so I knew something was up.

“Did you know that the first UK pressing of The Man Who Sold The World is er, not overly cheap?” he asked with all the innocence of an escaped convict found climbing half-way through a window at midnight.

“I don’t know about that – I think I have seen them for about a fiver.”

“Hmmm. You might want to check that… whilst I go shopping for a larger wine decanter and a Westlife T-Shirt. What size are you again?”

He can be quite insufferable at times.

Chris had rather irritatingly discovered that the first UK pressing of “The Man Who Sold The World” was a) very expensive and b) had a controversial cover: of Bowie draped louchely (if that’s a word) on a sofa wearing (of all things) a dress. Not a tight-fitting little black cocktail number, either. One that might have made a rather fetching pair of silk curtains. It would have struggled to flatter Twiggy. On Bowie it struggled even more. Perhaps a better title for the album would have been The Man Who Sold His Trousers.

We had agreed that First Pressings would be part of the bet. First pressings are most valued by collectors because a) Collectors are nerds, b) it sort of makes sense to get the first version of something and c) the first pressings are arguably better sounding: the first albums are minted when the stampers that press the vinyl are crisp, and hence the sound quality should be superior. This comes with the caveat that since most collectible vinyl is now 20 to 60 years old, the main sound consideration is now probably how the records were looked after in the years that have passed.

The story behind the dress is that it was one of six “men’s dresses” made by a Mr Fish of London, leader of the “peacock revolution” that Bowie purchased in 1970. Journalist Nick Kent described Bowie walking through New York airport immigration in one of the dresses in February 1971 as “looking for all the world like a young Lauren Bacall“. Given the aggressiveness of New York immigration officials even now, you have to admire Bowie’s cajones.

If that wasn’t enough, Bowie then travelled (wearing the dresses) across America – including a visit to that well-known forward-thinking liberal US state, Texas, in what might have ended up as a crazy suicide mission. Bowie later recalled “In Texas, one guy pulled a gun and called me a fag. But I thought the dress looked beautiful.”

Despite the controversial look of Bowie in a man-dress, and because of the scarcity of the record, which wasn’t a huge commercial success until it was re-released following the success of Ziggy Stardust, a new copy of “The Man Who Sold The World” in mint condition will cost a collector up to £500. I checked there and then – sure enough there was one on eBay for £400. If there’s a way of spending more money on a less pleasant photo I’d like to hear about it. Perhaps only a signed picture of Peter Beardsley standing next to Martin Keown, Wayne Rooney and Phil Neville would rival it. If they too were wearing dresses. I’m sure that wouldn’t cost £400 though…

This was Extremely Bad News. The thought of exceeding the budget by £400 on just one album filled me with horror. The Heath Robinson-esque financial part of the bet meant that if I went £400 over budget I would also have to buy Chris a £400 bottle of wine. Financial ruin stared me in the face. And then kneed me in the testicles.

However, a second version of “The Man Who Saved The World” was released in 1972 with a proto-Ziggy picture of Bowie in black and white. I had seen this “kicking cover” in used record shops for around a fiver and it was this that I had in mind for the bet. To learn it was not the original 1970 album, but a 1972 re-release was an unwelcome knock to an already stretched budget. I also discovered that even this album came with a lyric sheet and a poster – and a copy with the complete set might cost me £20 rather than £5. I had no intention of buying the £500 version.

I resolved I would have to buy the kicking cover at a sensible price and smooth-talk Chris into seeing sense. I wasn’t sure it was going to work…

Like Loading...
‹ How To Buy David Bowie’s Ziggy Stardust on Vinyl
David Bowie’s Vinyl Albums: The Man Who Sold The World, Scary Monsters and Lodger ›