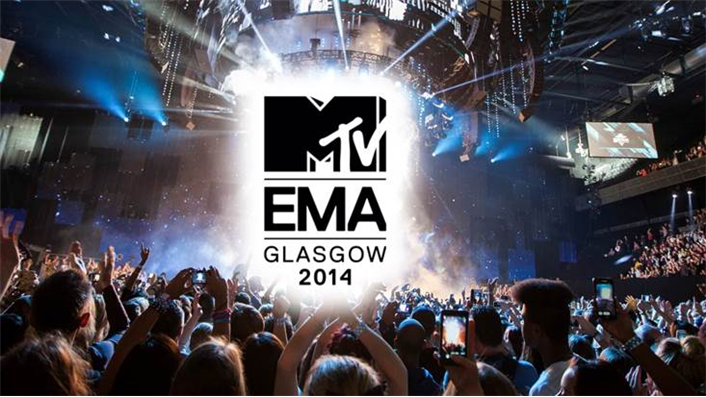 Great to see the return of the MTV European Music Awards tonight, live from Glasgow.

Frosty, threatening to turn violent at any moment and barely intelligible, Nicki Minaj was the perfect host for the City.

Previously the award show that has brought us the edifying spectacle of Miley Cyrus dancing with a spandex-clad little person, MTV clearly thought they would raise the tone by inviting Minaj to host with liberal use of the F-word, play mini-golf with a target in the shape of a vagina and sing songs about her butt. To be fair, that was still more classy than Cyrus. Just.

Minaj charmed the crowd by claiming to have pretty much become Scottish (“you should be really proud” she informed the throng somewhat immodestly) with a “Dope new rap”, which referenced Whisky and shortbread and turned into a Proclaimers singalong. If I had done that in a Glasgow nightclub, I’d have been rightly head-butted.

Royal Blood tried their best to get things going with “Figure It Out” surrounded by members of the audience contained within “Jailhouse Rock” style cages left over from an AC/DC video from the nineties.

The categories were baffling. “Best Pop” was not, as I expected, Irn Bru, but One Direction, who were so baffled by the honour (Best Pop….what? Song? Act? Video?) that not all of them could even be bothered to turn up to pre-record their acceptance speech.

Charli XCX then played a couple of her songs whilst having forgotten to zip up her onesie all the way up. She’ll be annoyed when she watches that back. Baffling name is XCX. In Ancient Rome would she have been called “Charli Ninety-Ten”?

Half of U2 then appeared on my TV without my asking, but gave a convincing performance. Edge played on piano with Bono backed by a string quartet, before the rest of the band turned up to remind us all why they are really a pretty good band.

Minaj then gave a live performance that promised past, present and future, like Dickens’ Christmas Carol, that is, if Dickens had just read Nuts magazine constantly instead of writing about reforming Victorian slums.

Slash then introduced Ozzy Osbourne as the “Global Icon”. “It could be worse, I could be Sting” said Ozzy in the video clip that introduced his arrival. He also looked baffled about the award, but then he looks pretty baffled most of the time, so it was hard to tell…..

One Direction won “Best Live”. Once again, I wondered where the rest of the award description had gone to, and only a small part of me thought it ought to read “Best with the sound turned off”.

Next was Ed Sheeran, who appeared to be trying to win the Scottish crowd over with his new song by making it sound like Wet Wet Wet. A couple danced behind him in a very eighties Dirty Dancing kind of way, and yes, it was as bad as it sounds.

Nicki Minaj then attempted a selfie which was photo bombed by a dinosaur. No, not Bono again, but a rubber T-Rex, which received a volley of abuse from Minaj that will be highly familiar to most Glaswegian pub landlords at closing time, or anyone who has worked as one of Mariah Carey’s assistants. Next, Katy Perry won the most coveted music award of all – “Best Look”, at which discovery of this category, a part of me slowly died.

I suspected I had travelled back in time ten years when Enrique Iglesias then performed a song, but no, he’s back apparently which is nice if you like that sort of thing.

Just when it couldn’t get any worse, The Hoff then showed up in a kilt and a Braveheart sketch, Ariana Grande thanked the production crew for her award rather than her parents or God, and that guy from LMAO showed up and forgot where he was. You can see why the Scots have a reputation for drinking so much if this is what they have to contend with…

Thankfully Alicia Keys brought a little decorum to proceedings, before Minaj attempted a half decent English accent. Not the best move in Scotland, but there you go.

Rounding things off was a tribute to Ozzy by Slash, Miles Kennedy and Simon Neil of Biffy Clyro. Ozzy looked on, still a bit confused but seemingly pleased. Probably because it meant the show had finished and he could go home….