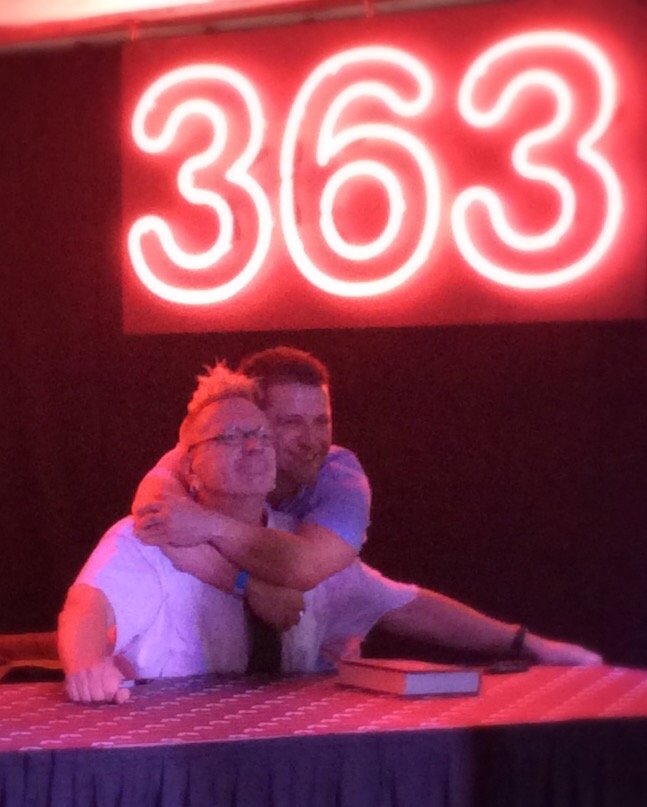 Alongside Iggy Pop, John Lydon is widely regarded as the Godfather of Punk.

Lydon’s infamy was secured this week in 1976 when The Sex Pistols swore on the Bill Grundy TV show, and called him a “dirty old sod”. Grundy’s behaviour, in encouraging a pop group to swear on tea time TV, is nevertheless now considered to be positively angelic compared with his peer group of seventies TV presenters.

More recently, Lydon found himself surrounded by snakes, lizards and various invertebrates through his appearance on “I’m a Celebrity…Get Me Out of Here!”, which included cockroaches, boa constrictors, Katie Price and Peter Andre.

The UK press made much of Lydon’s appearance in the jungle environment of “I’m a celebrity…”, especially when he was made to enter an ostrich enclosure. Vicious in attack, but somewhat cowardly, strutting, preening, and with brains the size of walnuts, the press made Lydon’s “ostrich trial” front page news.

And now Lydon has written an autobiography, called “Anger Is An Energy”. It’s a cracking read, and I popped along to HMV to meet Lydon briefly at his recent book signing.

Here’s five things I learned from reading the book:

1. Lydon’s childhood illness – resulting in his being in a total coma for six or seven months – robbed him of his memory, as he explains: “…after I got meningitis aged seven, I lost everything – all my memory, including who my mum and dad were….. Mum and Dad were very good, they trusted me that I’d find my way home, even though many a time I couldn’t – I’d literally forgotten where I lived”.

2. Lydon went to court to defend the album title “Never Mind The Bollocks….it’s the Sex Pistols”. Lydon: “Well, we didn’t have to go to court, but I volunteered….. We hired QC John Mortimer, writer of TV’s Rumpole of the Bailey , to prove ‘bollocks’ was actually derived from a nickname for clergymen”.

3. Lydon’s dislike of religion stems from being at a catholic school and being told by the nuns: “‘Oh, you’re left- handed, that’s the sign of the devil.’ Says Lydon, “What kind of message is that, to give a five- year- old who can already read and write? What evil, spiteful nonsense is that?”…. “Brides of Jesus? I’m sure that’s not what He had in mind.”

4. Lydon has a musical taste that surprises in many ways. He is critical of “Year One” punks and narrow-mindedness generally. As he says, “Disco sucks? You never heard that from me. Whoever wrote the punk manifesto wasn’t listening to the actual punks – them what started all this.”

Whilst still not a Beatles fan, (“It was all that ‘she loves you, yeah, yeah, yeah’ stuff. Urgh! I hated their hairdo, hated everything about them”) he nevertheless enjoys some artists that you wouldn’t expect an old punk to like, including Status Quo: “I loved the way that they found something inside a simple format, to say so much. Their methodology is simplicity, and perfection inside that simplicity. I’m so empathic with what they do, it just sounds like jolly good push- and- shove. Very, very skillful to me – superb, and beat perfect. Wonderful, brilliant, beautiful stuff.”

5. Finally, Lydon reveals the beauty secrets of Sid Vicious, whom he says was heavily influenced by Bowie. “He would get two chairs from the living room and put them in front of the oven, open it and lie upside down with his head inside with the gas on, and the heat would make his hair stiff. He once caught fire that way too…… there he was with his Dave Bowie quiff that he’d spent two days with his head backwards in the oven perfecting – because the idea of hairspray or a hairdryer never occurred to him!”

I won’t spoil any more for you, so you will need to read the book to discover why Lydon did those butter ads and “I’m A Celebrity” and why his dad was upset when he left the latter, how he was almost killed by a terrorist bomb, what happened when he first met Paul McCartney, what he really thinks of Malcolm McLaren, Robert Plant, Lemmy, The Clash and of course his former Pistols band mates. We also see the joy and pride he has in PiL, despite its many twists and turns.

Lydon’s book is funny, inquisitive and opinionated. Lydon’s voice comes through on every page – it’s like listening to the man speak across the table from you. What’s more, critical opinion has been favourable, which means…..this is not a book about which you would say “I can’t believe it’s not better….”

John Lydon has announced an event at Blackwell’s book shop in Oxford on Monday December 8 from 7pm to 8pm to discuss his new autobiography, Anger Is An Energy: My Life Uncensored. Entry to the event costs £5 and a pre-signed copy of the book costs £20.

Like Loading...
‹ Why German Heavy Metal Still Matters: Accept – Live at The Forum
Christmas Shopping For The Music Fan in Your Life. Sorted. ›