Is This Skynyrd? It’s Pretty Cool: The Strange Tale of Raging Slab 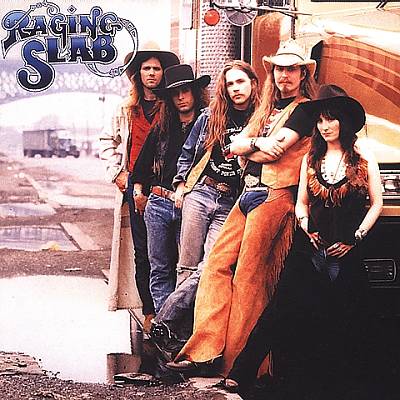 In some respects, the Wikipedia entry for New York’s Best Southern Rock band (yes, you read that correctly) Raging Slab is as (unintentionally) funny and as interesting as any band.

Raging Slab had a career blighted by incredibly poor luck, doubtless brought some of that on themselves*, yet began life with Deee-Lite’s Super DJ Dmitri on guitar (yes – that Dee-Lite, of “Groove Is In The Heart” fame)**, often gigged with hardcore punk bands such as the Butthole Surfers, had the unique feature (in the male dominated eighties hard rock scene) of boasting a female lead (slide) guitarist, (actually Greg Strzempka and  Elyse Steinman were a husband and wife team), supported Guns n Roses and were supported by “Mr Crowe’s Garden (before they became The Black Crowes) and through it all produced not one, but two albums that are amongst the best of the hard rock genre with a unique sound that was accurately described on their 1989 LP as “Lynyrd Skynyrd meets Metallica”.

I have an ongoing debate with a friend about what makes a great band. I reckon you only need one or two great records – it doesn’t matter if there are a couple that don’t quite hit the mark. Raging Slab are one of the bands I think about when I make this argument.

There’s something about slide guitar when played well that I can’t resist, from Muddy Waters’ playful “I Can’t Be Satisfied”, to George Harrison’s more deliberate tones on “Free As A Bird”. Raging Slab also used slide guitar to superb effect.

But before I wax lyrical, let’s start with the Spinal Tap bit:

This is a band which:

In addition to this, their lead guitarist left the band and rejoined a classic rock covers band (like Judas Priest in reverse), a tour was cancelled due to the drummer suffering from a knee injury, they were forced to go on hiatus for six years due to their record label not releasing them from their contract, (*takes deep breath*) and when they did regroup another European tour got postponed when their flight was scheduled to depart New York on 11th September 2001…

Now we have got that out of our system, let’s look at the two album that makes this band special. They are respectively, 1989’s “Raging Slab” and 1993’s “Dynamite Monster Boogie Concert”.

The former is the most obviously influenced by Metallica, in the staccato riff of “Waiting for the Potion” and the fast paced “Don’t Dog Me” and “Get Off My Jollies”, “Dig a Hole” on the other hand could have sat on any of Aerosmith’s classic seventies albums – and strengthened them – whilst songs like “Sorry’s All I Got” and “Shiny Mama” are simply joyful and have stood the test of time, sounding sharp even now. 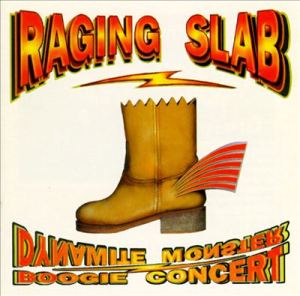 And so they were. Opener “Anywhere But Here” might have had the Black Crowes spitting feathers of jealousy, whilst Mumford and Sons can only dream of writing something as beautiful as the proto-Mumford ballad (and banjo-led) “So Help Me”.

On the other hand, even Mumford and his sons might baulk at what are perhaps the least tender love song lyrics on album closer “Ain’t Ugly None”, which chorus goes “One thing I know / My baby ain’t ugly none”, which I can’t help feel is rather damning any girl with faint praise.

So why is Raging Slab not better known, more than 25 years after the release of the classic self titled major label debut?

Well, Grunge was one reason. The Slabs’ music didn’t quite fit into the mainstream, and “Dynamite…” was released less a year before the death of Kurt Cobain – when Grunge was at a commercial peak.

The other reason was that previously mentioned Record Company-enforced hiatus, and because the follow up to “Dynamite…” – 1996’s “Sing Monkey Sing” – was pretty disappointing.

Sometimes it seems, a band is capable of great things but struggles to live up to their early success. Raging Slab did better than many, and managed to hit the target twice.

* I can only speculate, but their 2001 song “The Dealer” contains the lyric “I’m in love with the needle and the dealer”. I’m assuming they aren’t talking about sewing.

Like Loading...
‹ Every Record Tells A Story Photos of 2014
Sugar Pie DeSanto: The Forgotten Queen of Chess Records? ›