“All the banter is lies… but the songs are true….”, says Father John Misty aka former solo artist J.Tillman aka former Fleet Foxes drummer Josh Tillman, under the glare of the solo spotlight of a packed Rough Trade East.

But it is reassuring to know that the stories of neighbourly upset at the noises next door of Tillman and his new bride conceiving the antichrist, and three part harmony renditions of Silent Night in the bath with two female fans on his magnificent new album “I Love You Honeybear” are from his own experiences giving the biting but humorous lyrics an edge of authenticity. 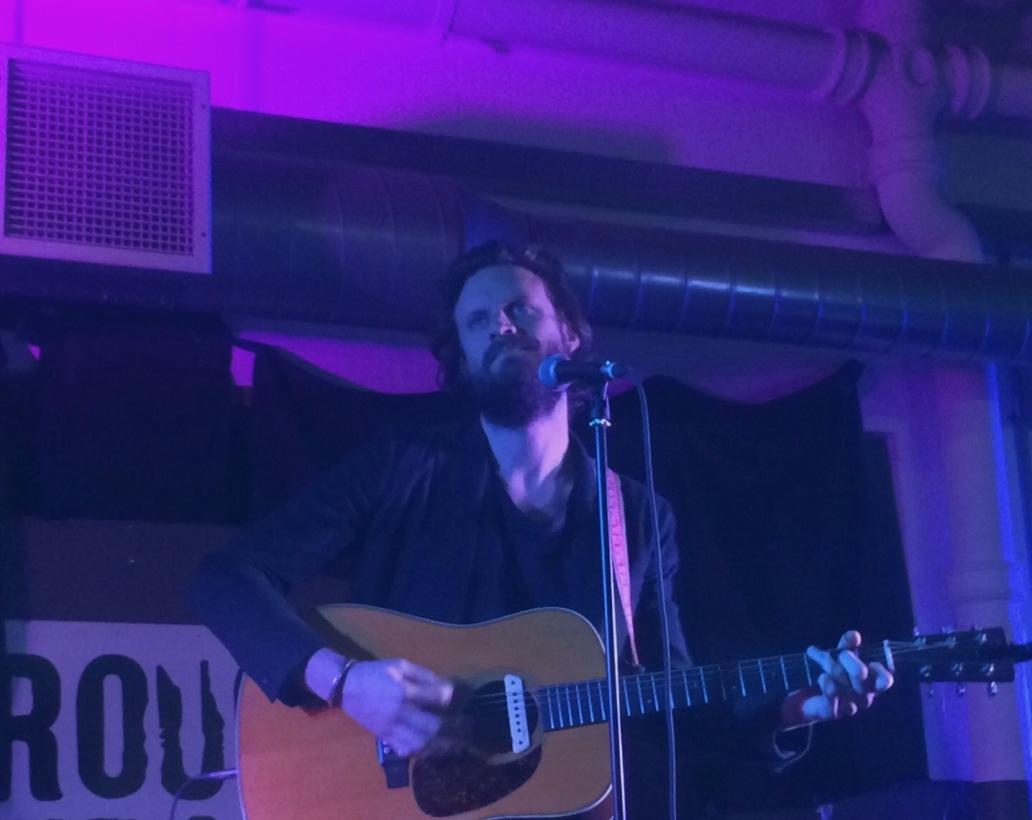 In town to support the aforementioned album with both an in-store at Rough Trade followed by a gig at the very apt Shoreditch Village Underground (given the critical praise heaped upon him by the hip online music websites) Tillman played an unaccompanied acoustic set.

Kicking off with the title track to the new record and focusing on the more stripped down tracks, although lacking the lush orchestration and soulful brass from the full band versions, each of the seven songs highlighted both his fantastic voice and the, in equal turns, amusing and cynical storytelling of new songs “The Night Josh Tillman Came To Our Apartment” and “Nothing Ever Good Happens at the Goddamn Thirsty Crow”.

Album stand out “Bored In The USA”, interpreted equally as either a heartfelt look at the disappointment of 21st century life or a cutting satire of complaint rock songs by typically middle class middle age white men, was the centrepiece and rapturously received.

Intended set closer “Now I’m Learning To Love The War” followed, with each line about the gargantuan use of oil to produce, manufacture and market one record receiving chortles of laughter from the audience, whom the irony of being surrounded by so many records was not lost.

An unscheduled “I Went To The Store One Day”, due to demand from the captivated crowd, closed proceedings. As both a set closer and the song which closes the new record, telling the story of Tillman’s relationship to his wife from the end to the beginning, this beautiful and touching song is superb.

“Now let’s shift some units….” was Tillman’s opening gambit as he came on stage. Based on the quality of performances like these and the new album that won’t be a problem at all.

Guest-written (and photographed) by Chris at Really Random Records. This is the first of two reviews of Father John Misty that we are going to put on Every Record Tells A Story, covering yesterday’s Rough Trade East show and tonight’s Village Underground gig.

Like Loading...
‹ The Brits 2015: A Fallen Madonna…as the Bland Leads The Bland
Josh Tillman is a Rock Star: Father John Misty, Live at the Village Underground, East London ›