Asylums: “The commercialised end of guitar music in this country is just f—ing awful…”

Every now and then I get to hear a new record that really stands out from the crowd and brings me to the sort of heightened state of alert that you would normally only see at the Criminal Records Bureau when a Radio 1 DJ puts in an application to work with the local scout camp.

It doesn’t happen very often, but previous bands to raise the ERTAS eyebrow include Royal Blood, The Vaccines, Drenge and Sweet Billy Pilgrim, so when it does happen it tends to be a good sign rather than a sort of duet-with-Bowie-terminal-bad-luck-curse * to those involved.

Asylums are the latest bunch of guitar-botherers to hit the ERTAS radar. The four piece band are from Southend-on-Sea, and consist of Luke Branch on vocals and guitar, Jazz Miell on guitar, Michael Webster on bass and Henry Tyler on drums. Their first album will be released later this year, so we’re getting in early on this one…

Not only is their latest record “Wet Dream Fanzine” an absolute belter of a song, but Asylums are showing just how a band can get played on the radio and release records at a time when the music industry appears to be on its knees. The record has been released on their own label, “Cool Things Records”.

I got in touch with Luke Branch. He is an entertaining talker, sounding something like a young Mick Jagger, and told me how a new band gets played on the radio, and how Asylums came about.

“We’ve all been friends for a long time. Jazz and I used to see gigs together – he was my only friend who could be arsed to see gigs on week nights! So we used to go up and see gigs and watch bands and just get horribly jealous! So we thought it would be good to do something together. Mike used to be the singer in a band that came to an end and I’d just finished a project and we met up and started a label first, actually. 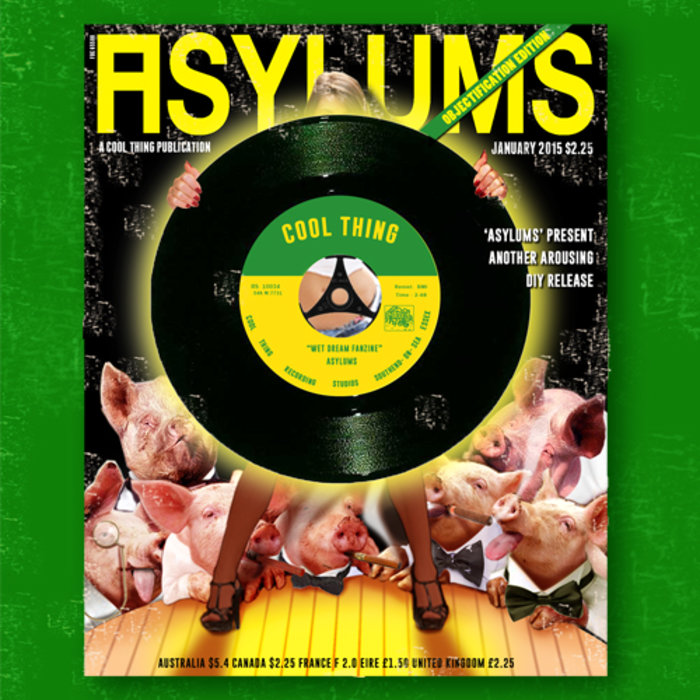 “Everybody has got sick of the old way of doing things and, at least amongst the people I know, there’s a move back to approaching things in a different way, perhaps taking ownership of it a bit more – all of it. Approaching it in a DIY way, not with any less ambition, we just wanted to do the opposite to what we had ever done before – and have a right laugh doing it.”“I feel like the kind of guitar music I love has made a real resurgence in the last couple of years – but only in the underground. In general the commercialised end of it is just f–ing awful in this country and has been for a long time. It has been really inspiring to pick up a guitar and make interesting arty pop records, but do it on a budget and do it like they used to do it on Sub Pop and labels like that. There is no money, at the end of the day!”

“Guitar music is a cult thing these days and should be delivered to the world in a cult way.”

How did you get your music heard?

“It’s really lovely for us – we were quite shocked when Radio 1 started playing the tunes and people wanted to worked with us. We’ve probably had about thirty plays on Radio 1 and sixty on XFM, interviews with Steve Lamaq and a session for John Kennedy – this has all been since August when we put a single out on our own label. We did a digital single, one every three months and then we have collated it into this EP, but from the very first song we put out it got picked up on the radio and Clash Magazine.

So people are picking up on it?

“I hope so, man, because it’s the funnest band to be in ever! We’ve had such a blast this week and the more crazy things get its making the music crazier, which is fun.”

You have quite fun videos as well, with the sock puppets…

“With that, because we’ve got no money, we have been making all the videos and all the artwork ourselves – a lot of our friends are in the creative arts and have no money as well – and they have been doing some animation and helping us out.”

Is this all centred around Southend?

“Yeah, absolutely. Everybody in the band is from Southend apart from Henry the drummer.”

“We’ve started this Cool Things label for the band – we thought we’d do all of it, and in a weird kind of way it’s been liberating and made people come to us which is quite helpful. We wanted to put vinyl records out like all the great labels that we love and we’ve done a deal with Republic of Music to do our singles, and they’re paying for the vinyl which takes that horrible pain of how do you afford it out of it. They distribute it throughout the UK and Europe.”

“Anyone can get stuff up on the Internet, but to work towards the physical product is the bollocks…”

“Bottom line is we pay for the masters, the basic recordings to be made, we pay for all of the promotional costs, PR, pluggers, who are all our friends anyway, who are working for us for hardly any money because they like the music. So we do that side of things and Republic of Music pay for the manufacturing costs and contribute ideas – so they have sent us a bunch of records to sign that they are sending to a particular online outlet.”

“Southend is definitely home – we’ve been trying to use people from Southend to help us, right through from website design – there’s friends that do that  – putting on club nights, rehearsing, and the stickers that we’ve done. You know the Garbage Pail Kids stickers from the eighties? We’ve done some “Cool Things” stickers as it’s our label name and we got those things printed up in Southend – little fun extra things to go with the music, really.”

“We were quite shocked when Radio 1 started playing the tune”

Where are the records made?

“I’m sitting in a studio right now – Broadfields Studio in Watford – I’d love to record it in Southend, but my friend has got this studio in his garden which is a wicked little punk rock studio and we just come here every couple of months and lay some tracks down – we’re about eighty percent through recording an album at the minute, and I think it will be done at the end of March – we just drop in and do a few days.”

“We’ve just finished two new songs and I think one of them is going to be the next one that we put out called “Second Class Sex” which sounds just f—ing awesome – it might be the best thing we’ve done so far.”

Will the album sound the same as the singles?

“It’s a little bit broader. The stuff that we have put out has been very punk rock, very quick and there’ll be loads of that on the record but it would be a bit relentless to have a whole album like that so we’ve got this song called “Joy In A Small Wage” which is almost like Orange Juice meets a fuzz rock band which a lot of people say is our best song.”

“We just finished another song called “Slacker Shopper” which is more groove oriented and free-er in its form, and the most different is a song called – well, this might not be the final title but at the minute it’s called “It Took Me So Long To Get Here I Can’t Remember Where I Came From“. That one sounds like it’s got a little bit of art rock, like Talking Heads but then it really unloads in the chorus to this pseudo-glam rock thing but in a really fuzzy, sarcastic way!

“Tonight we’ve got twelve tunes done and there’s another four to do and we’ll cull it from that. We’ve got twenty tunes, but we don’t need to put the record out until the end of the festival season. We might put one more punk rock banger out before we put a different thing out because it’s so much fun to play live at the moment, so fun.

So where can people see you play?

“There are a few shows – we are playing with Carl Barat and the Jackals at The Scala, we’re doing the Great Escape Festival, and we’re doing Village Green festival in Southend – one of the main bands at that – and we have six festivals that we can’t announce yet booked in over the summer. I’m sure a few more will come in so we’ll be playing pretty consistently in the build up to the album.”

So will it be released on “Cool Thing Records”?

“Well, at the moment there are a few bigger labels that are interested in picking the album up and putting it out through them via Cool Thing – us licensing it to them, they could give us some money to do it properly, the way everybody expects it to be but for us – we might do that, I guess we’ll just have to see. We didn’t really get into it for money – the only thing that excites me about maybe having a bit of money is that we might be able to put some artwork on billboards! Just pollute the word with crazy ideas!”

You don’t want your ideas watered down though….

“Exactly, especially with a band like us. The thing is, it’s easy to write pop songs when there’s no pressure but pop songs by a guitar band don’t sound like pop songs in the charts these days. I think guitar music is a cult thing these days and should be delivered to the world in a cult way.”

“Polish it up too much and it all gets too familiar to me, just turn the f—in’ pedals up to ten!”

You can hear more from Asylums on their website.
New EP Wet Dream Fanzine is available online from Cool Things Records.
The Village Green Festival is an outdoor event at Chalkwell Park, Essex. Tickets cost just £8 for the day and details are available at The Village Green website.
* see what happened to Marc Bolan, Bing Crosby, Freddie Mercury.