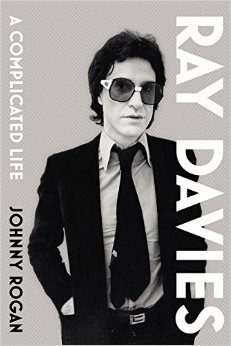 Kinks fans have been spoiled of late with a number of books about the band, particularly as for many years there was no definitive Kinks bio. Both Davies brothers penned their own versions of the tale with Ray’s X-Ray and Dave’s Kink, but, naturally, they only tell the tale from their own perspectives. “God Save The Kinks” by Rob Jovanovic, and Nick Hastead’s “You Really Got Me” are both career spanning full-blown Kinks biographies released over the last couple of years, whilst Ray Davies wrote his further thoughts on “Americana: The Kinks, The Road and the Perfect Riff”. Now, to top them all comes biographer Jonny Rogan, whose monster-sized 634 page epic covers just the “Complicated Life” of Ray Davies alone.

Rogan has some history as a biographer. His tome “Morrissey and Marr: The Severed Alliance” resulted in the former rather uncharitably (and without having actually read the book) hoping Rogan might “ends his days very soon in an M3 pile-up“. Whilst Morrissey’s wish has yet to be granted, the book has remained in print for the last twenty years and for many is the definitive story of The Smiths, to the extent that the book was used as a reference when The Smiths’ business affairs went to the high court.

The story of The Kinks can be distilled to fewer than 634 pages, of course. Of the key moments in Ray Davies’ life, the realisation that Rosie, the woman whom he thought was his mother was actually his sister looms pretty large. Davies speculates whether that had an effect on his relationship with his younger brother Dave. The birth of the gregarious Dave lead to the more sensitive older sibling withdrawing into his shell.

And then there’s the life of Ray’s sister Rene. Rene was a teenager diagnosed with a rheumatic heart.* Rene married a Canadian soldier called Bob and went to live in Canada. On Ray’s thirteenth birthday Rene was back in the UK and bought him a present: his first Spanish guitar. Later that night Rene went dancing at the Lyceum ballroom just off The Strand in the West End, where she suffered a heart attack, collapsed and died, aged just 31. This story later inspired the Kinks hit “Come Dancing”.

Said Davies in his quirky autobiography X-Ray, “The only part of Rene left that I could identify with were the Elvis Presley records and the guitar she had given me. If these were to remain a fixture in my world, then I would have to withdraw emotionally, leaving my body to lead another existence.” Such an emotional withdrawal is perhaps the biggest clue as to the reasons behind Davies’ actions in later life.

Rogan presents such stories, plus many more entertaining ones just as Jovanovic and Hastead do. There’s no shortage of drama, be it fighting, suicide attempts, a shooting, various relationships, including one with Crissie Hynde, and yet more fighting, but where Rogan’s approach differs is firstly in his depth of interviews – Rogan began interviewing subjects back in late 1981, and has spoken with a wider range of interviewees than Jovanovic, including Davies, his brother Dave, Kinks Mick Avory, Pete Quaife, John Dalton and John Gisling, plus Davies’ ex-wife Rasa, former Kinks managers, producers, old friends and colleagues.

Secondly, Rogan offers his insight as to how he believes these incidents affected Davies, and this is all explored thoughtfully in the early pages within the context of the explosion of rock n roll and the change in British society after the Second World War. These were themes that Davies would later explore himself in his magnum opus “The Kinks Are The Village Green Preservation Society”.

The Davies brothers are well known for their fiery relationship and the in-fighting between the band members, the latter perhaps best demonstrated by how Quaife became the bass player. “I was basically threatened” said Quaife, “I was given the shortest matchstick and they made it that I’d get the shortest, and if I didn’t Ray would break it and give it back to me”.

Early incidents are properly covered, including the identity of the real David Watts, the time when Rod Stewart briefly auditioned for The Kinks (now that would have been an interesting, but impossible, combination), and the “Cardiff Incident” that involved an argument, a cymbal, Mick Avory, Dave Davies’ head, and lots of blood.

The first 400 pages are gripping, detailed reading as The Davies brothers fight their label, their management, the U.S. Unions and each other, whilst producing the most vital music. And then….

In the last third of the book, covering 1972 to the present day, Davies becomes less and less easy to empathise with. Whilst in the context of albums such as “Face To Face” and “Something Else”, such erratic behaviour might be justified or at least considered an acceptable trade-off, the same argument cannot be so well made for The Kinks mid-seventies records. Davies’ life truly becomes a complicated one.

Overall, this is perhaps the most comprehensive Ray Davies or Kinks biography I have read, and Rogan has done his research well. Yet, despite all the analysis that Rogan so admirably performs, the reader still doesn’t quite understand the reasons behind Davies’ behaviour. Davies remains something of an enigma, defined by his difficult relationships with other people, but perhaps more importantly by his extraordinary output as one of England’s greatest songwriters.

* In X-Ray Davies states that the doctor had whispered to his mother that “The child will not live past thirty”. The doctor got it wrong, but only by a year.

** Petrides’ quote actually finished “…and you realise there are still three CDs to go”.

Ray Davies: A Complicated Life by Johnny Rogan is out this week,