Home › Indie › Why You Should Hear The New Courtney Barnett LP…

Why You Should Hear The New Courtney Barnett LP…

2015 looks like being a big year for Australian singer songwriter Courtney Barnett, with her laconic, grungy, stream-of-consciousness style attracting strong reviews with debut album “Sometimes I Sit and Think, and Sometimes I Just Sit”. Barnett brought a three piece band to Rough Trade last night to launch the album.

Barnett has built a good following by releasing two EPs since 2012 and last year played the Park Stage at the Glastonbury Festival, where I caught her show.

The good news is that the new album is possibly the best LP I have heard so far this year – there’s more variation than on the first two EPs whilst her backing band sounds tighter and more substantial, with some nice keyboard sounds and flourishes mixing things up.

First song on the album, and the song that kicked off Barnett’s 40 minute turn at Rough Trade East was “Elevator Operator”. It has a feel reminiscent of Elvis Costello’s “Pump It Up” enhanced by a bluesy electric piano and perhaps the first name check for Vegemite since Men At Work’s “Down Under”, which is a wonderful thing for music nerds and yeast-based spreads alike. Barnett’s off-beat subject matter, on the other hand is of a potential suicide jumper who turns out not to be suicidal – he just likes to imagine he’s playing Sim City from the top of a building.

Barnett’s live set -and her band – is more stripped back than the album and – if we can get technical for a minute – Barnett’s guitar technique is interesting, as she plays without a pick, with the thumb doing most of the rhythm work. The album is not all uptempo – indeed some of the album’s most affecting moments are during its quieter segments. “An Illustration of Loneliness (Awake In New York)” manages to be both laid back and catchy, whilst “Depreston” – given an airing tonight with some lovely Smiths-esque arpeggio guitar work – has Barnett imagining buying property out of town, with “a lovely garden / a garage for two cars to park in / or a lot of room for storage if you’ve just got one“, and feeling melancholic as she realises why the house is being sold. It’s beautiful music with matter-of-fact lyrics that remind me a little of Aimee Mann. Either way, the style is very much Barnett’s own.

On the new album, the situation comedy of Barnett’s best known song, “Avant Gardener” is back on display in songs like “Aqua Profunda!” where she comes a cropper trying to impress a guy at the swimming pool (I tried my very best to impress you / held my breath for longer than I normally do / I was getting dizzy / my hair was wet and frizzy), but Barnett also shows her more serious side managing to ponder damage to the environment, the Great Barrier Reef, and well, who knows what else? in the dramatic highlight of the album, “Kim’s Caravan”. 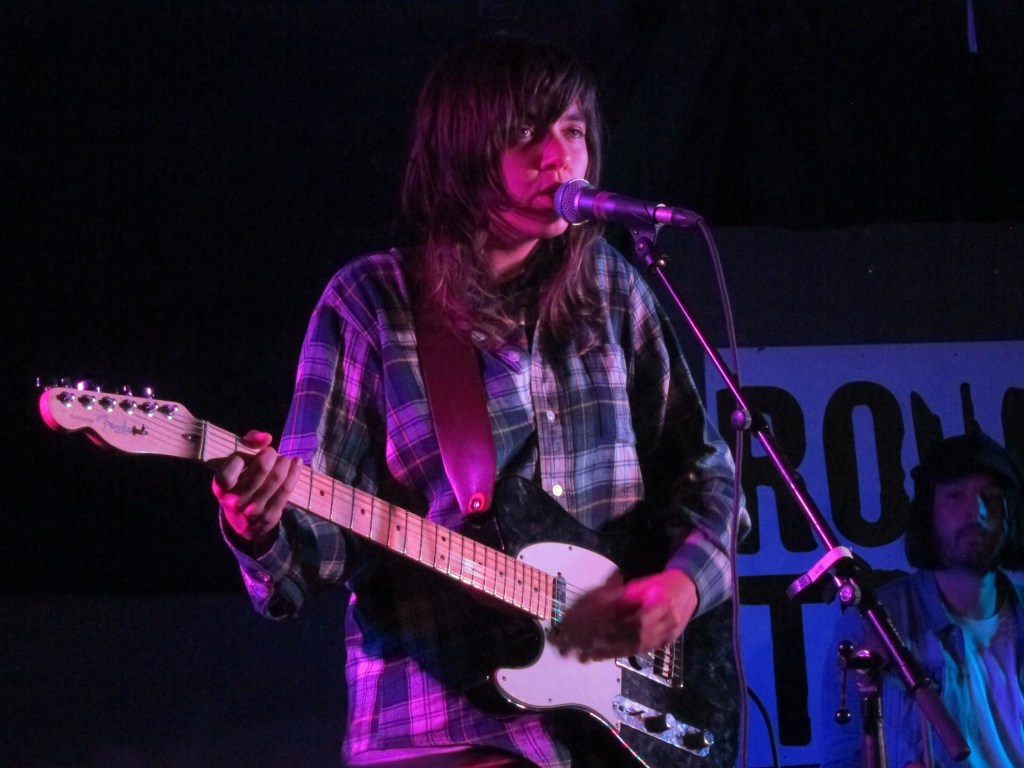 There was time for neither in this set, with Barnett instead closing with rousing first single “Pedestrian at Best”, which thumps around nicely, Barnett’s rapid fire patter only occasionally sounding like she’s commentating at the Australian Grand National. This was followed by an unscheduled encore of “Avant Gardener” – a song I suspect Barnett will be playing for a long time to come…

Courtney Barnett’s album “Sometimes I Sit and Think, and Sometimes I Just Sit” is out now. Rough Trade has a very nice orange vinyl version, limited to just 800 copies.

Like Loading...
‹ Irrefutable Facts About Two Piece Bands – Plus Hear Two New Songs By Drenge
The Who and Wilko Johnson: Live at The Royal Albert Hall ›